In another “first” at the National Synchrotron Light Source II (NSLS-II) at Brookhaven National Laboratory, a group working at the Hard X-Ray Nanoprobe has taken the facility's inaugural x-ray images. Their striking renderings of a monarch butterfly specimen demonstrate the synchrotron's ability to generate extremely detailed images and foretell a future of exciting research. 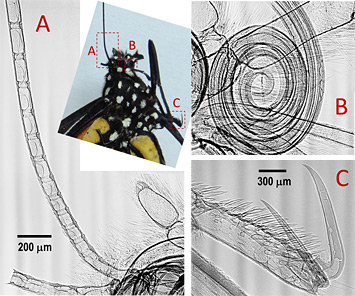 An X-ray image of the butterfly antennae (A), the mouth (B), and one of claws (C). The imaged regions are indicated in the optical microgram in the center.

“The staff scientists at the HXN beamline immensely enjoyed producing these amazingly sharp images,” said HXN group leader Yong Chu. “Even non-scientists can appreciate their superb quality, particularly when comparing them with a typical x-ray taken at a hospital. Their spectacular sharpness is due to the world-leading brightness of NSLS-II.”

He continued, “This is a first step toward our ultimate goal of achieving x-ray images with details at the one-nanometer level and serves as a preview of the many exciting scientific results that will soon be discovered at HXN and NSLS-II's many other beamlines.”

The images were taken as part of a system check of the HXN beamline at NSLS-II, a U.S. Department of Energy Office of Science User Facility. After the beamline components and optics were aligned, monochromatic x-rays were sent from the first optical enclosure to the experimental station. At that point, the images were taken using a high-resolution charge-coupled device (CCD) camera with an optically coupled scintillation screen, which is a typical setup for x-ray imaging. During the test, the HXN group used an imaging resolution of 1.5 microns (millionths of a meter) per pixel.

The test images were produced using x-rays that were only one-thousandth of the maximum power of NSLS-II. The butterfly sample was positioned 63 meters away from the x-ray source, and the CCD camera was placed 160 millimeters away from the sample. This camera-to-sample distance was chosen to yield images with the optimal contrast using a method called in-line phase-contrast imaging. Because the butterfly was much larger than the field of view of the camera, different parts of the specimen were imaged separately. Those images were then stitched together to construct a broader view.

“The images show amazing contrast, as if they were hand-drawn by an artist,” said Hanfei Yan, one of the HXN beamline scientists.

“Even at this modest imaging resolution of 1.5 microns, the collected images exhibit many interesting features of the insect that are not obvious to the public, such as the internal structure of the butterfly’s mouth, or proboscis,” said Sebastian Kalbfleisch, a member of the HXN beamline team. “The images also show elaborate semi-periodic joint structure in the antenna, which allow a butterfly to move its feelers freely in all directions.”

Wah-Keat Lee, who is leading development of the NSLS-II Full-Field X-ray Imaging (FXI) beamline, added, “These superb images speak for themselves as to why NSLS-II is an ideal synchrotron for x-ray imaging.”

Each image took five seconds to generate because only one-thousandth of the full power of NSLS-II was used. This means that, at the maximum storage-ring current of 500 milliamps, scientists will be able to perform monochromatic beam x-ray imaging with a five-millisecond exposure time.

This month, Chu said, the HXN team will commission a one-of-kind x-ray microscope, equipped with novel x-ray lenses called multilayer Laue lenses, both of which are developed at NSLS-II. This unique instrument will produce images with a resolution equivalent to ten thousand times smaller than a human hair, and they will help him and his group reveal structural details in their samples, including elemental composition, crystalline ordering, and chemical states.