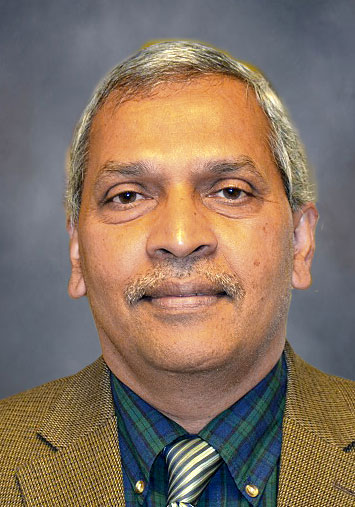 Murty S. Kambhampati, a professor of biology and chair of the Department of Natural Sciences at Southern University at New Orleans (SUNO) who has extensive ties to Brookhaven Lab and the U.S. Department of Energy as both a mentor and researcher, is one of the recipients of this year's Presidential Award for Excellence in Science, Mathematics, and Engineering Mentoring (PAESMEM).

According to the National Science Foundation (NSF), which sponsors the award, “PAESMEM recognizes outstanding efforts of mentors in encouraging the next generation of innovators and developing a science and engineering workforce that reflects the diverse talent of America.”

Kambhampati helped to found the Interdisciplinary Consortium for Research and Educational Access in Science and Engineering (INCREASE), a collaboration among several universities whose mission is to promote research and education in minority-serving institutions. Its goal is to increase their students' and faculty's usage of national user facilities, such as those supported by the DOE Office of Science, thereby increasing the numbers of women and those from historically underrepresented groups who pursue science and engineering careers.

At Brookhaven, through the Lab's Office of Educational Programs, INCREASE has provided a way for science and technology faculty from these universities to come to the National Synchrotron Light Source (and now the new NSLS-II) and the Center for Functional Nanomaterials (CFN)—both DOE Office of Science User Facilities—for an introduction to synchrotron science and to run experiments. These workshops became possible in large part through a grant, secured by Kambhampati and SUNO colleagues Joe Omojola and Carl P. Johnson in 2009, to fund INCREASE programs for minority professors at the NSLS and the CFN. The grant, totaling $105,000 over three years through the NSF's Historically Black Colleges and Universities “Enhancement, Enrichment, and Excellence in Mathematics and Sciences (E3MaS)” program, was a huge boost to INCREASE.

Kambhampati first came to Brookhaven in 2006 through what is now known as the DOE Visiting Faculty Program (VFP), a summer session administered by the DOE Office of Science's Office of Workforce Development for Teachers and Scientists. In fact, it was during this first summer that INCREASE was born.

Later, Kambhampati helped established a pipeline for SUNO students to attend Dowling College (located in Oakdale, Long Island) for a Master of Science (MS) degree in microbiology, in collaboration with Dowling Biology Department Chair Vishal Shah, and Brookhaven Natural and Cultural Resource Manager Timothy Green. While at Dowling, the students were able to do research at Brookhaven Lab facilities. In total, Kambhampati has brought more than 20 students to Brookhaven via VFP and the Summer Undergraduate Laboratory Internships program (SULI, also administered by DOE); some have gone on to receive PhDs or are working toward an MS/PhD, and one is pursuing an MD.

Kambhampati expressed his deep sense of gratitude to SUNO, NSF, DOE, and Tim Green; Ken White, Noel Blackburn, and Mel Morris from the Brookhaven Office of Educational Programs; and Vishal Shah, Shreya Shah, and Richard Wilkens at Dowling College for the research opportunities, financial support, and the facilities provided to him and his students. He also sincerely thanks Omojola for nominating him for the award and Joe Dvorak, Ryan Tappero, and Lisa Miller at NSLS for their time, continued encouragement, and support.

“The students who have participated in the DOE summer programs at Brookhaven Lab with me and my colleagues have been quite successful,” said Kambhampati. “It has been very satisfying and rewarding for me to have this positive influence on my science, technology, engineering and math mentees. The experience at Brookhaven made a huge contribution in their motivation and career paths as scientists.”

Kambhampati and the other recipients will receive their awards at a White House ceremony later this year.