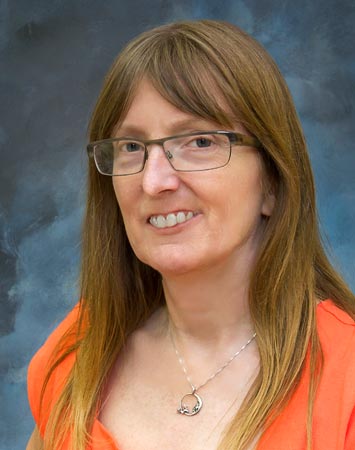 As head of the International Safeguards Project Office (ISPO) at the U.S Department of Energy’s (DOE) Brookhaven National Laboratory for more than 10 years, Susan Pepper has worked extensively with the International Atomic Energy Agency (IAEA) to provide their Department of Safeguards with the tools it needs to track nuclear material under the terms of the United Nations’ Nonproliferation Treaty (NPT). But the current interim chair of the Nonproliferation and National Security Department at Brookhaven has another pet cause a bit closer to home: she helps care for the Lab’s population of stray cats.

Pepper, who holds bachelor’s and master’s degrees in civil engineering from MIT, interned in the Structural Analysis Division of the Lab’s Department of Nuclear Energy during the summers of 1982 and 1983, performing reliability analysis on safety-related nuclear structures. When she joined the department fulltime in 1985, she participated in safety analysis work for the Nuclear Regulatory Commission, the Department of Energy and others, and worked with the team that did operational readiness reviews and the safety evaluation report for the Waste Isolation Pilot Project in New Mexico.

In 1993, her career changed direction when she seized an opportunity to join ISPO, which has been located at Brookhaven since 1977.  ISPO manages the U.S. Support Program (USSP) to the IAEA’s Department of Safeguards, providing national laboratory technology to further the agency’s ability to verify the nonproliferation treaty.

“I was able to live in Vienna, Austria, for four years as ISPO’s representative, which continues to be the high point of my career,” Pepper said.  “Vienna is a beautiful city and there is art and and music and delicious food and wine. Austria has lots of skiing, hiking and bicycle riding.  It’s a socialist country, so they invest a lot in making the country beautiful for the people.

“I was there at the perfect time of life — old enough to be able to afford to do things and young enough to do them,” she said. “It was also excellent for my career because it was just after the first Gulf War and the revelations that Iraq had cheated on its NPT commitments.  The other states of the IAEA realized the need to strengthen IAEA Safeguards and gave the agency more tools. So I learned on the ground floor about remote monitoring, environmental sampling and open-source information collection when the IAEA was beginning to use them to do its work. “

When she returned to the Lab in 1998, Pepper was named the head of ISPO, her first management position. The budget for the support program was increasing so she was able to bring on additional staff, and ISPO grew from three people in 1998 to about 10 since 2011. The office began sponsoring a series of workshops addressing technical challenges the IAEA faces, but Pepper believes her greatest contribution was perceiving the need to get young people involved and creating an USSP internship program in the IAEA Department of Safeguards.

“Another responsibility of ISPO is to increase awareness among US citizens of the jobs that are available at the IAEA,” Pepper said. “When I would speak to student groups about the IAEA, I had a hard time getting their attention because even the lowest level jobs required five or six years of work experience. Most students are interested in something they can do right after they graduate.  I came up with the idea of having one-year paid internships at the IAEA for students or recent graduates who would work side by side with more senior staff.

“It was very successful,” she said.  “In four years we sponsored assignments for 40 people. But the concept of internship didn’t fit well with the IAEA’s human resources structure. So in 2005, the U.S. entered into an agreement with the IAEA to have what are called Junior Professional Officers (JPOs), basically interns with full rights and privileges of agency staff.  They can work for one to two years, then come back to the United States or, in some cases they get hired by the IAEA. It’s turned into kind of a springboard into the IAEA.“

Over the years the Department of Nuclear Energy at Brookhaven underwent reorganizations and eventually became the Department of Nonproliferation and National Security (NN).  A few years back, Pepper began to work on special projects in NN, although she continued to manage ISPO until being named deputy department chair. She is also studying for her MBA under the new onsite program through Stony Brook University.

“I’ve been more of a manager for the last couple of years,” she said. “With ISPO, I was a manager but was also hands-on in the work.  Now I don’t have time to do a lot of hands-on work, but I try to clear the way for other people to do theirs.”

Since returning to Brookhaven, Pepper has undertaken rescuing stray cats and participates in a group of Brookhaven employees who try to contain the proliferation of the Lab’s feline population.

“There are a couple of colonies at the Lab,” she said. “We feed them, get them all neutered, find homes for those who are adoptable and take them to the vet when they need treatment. Part of the reason we feed them is to keep them out of the trash at the cafeteria. I don’t know if people drop them off here or if people in the apartments leave and abandon them, but there’s a real environmental impact. Any animal brought onsite should be registered, just like the people, and we should have a picture of them and they should be required to have microchips.

“We’re down to the last one of the originals,” she added. “Paulie is about 17 years old and I’m building a little shed in my backyard because I don’t want him to go through another winter like the last one.”

Paulie won’t be alone. Pepper and her husband, a former Brookhaven Lab molecular biologist who she met playing softball, have 13 cats at home.

“I wouldn’t say we’re thrilled about it but its kind of hard to say no when you see a cat that you know isn’t adoptable,” she said. “Now that we have so many, I have to just shut off my heart when I see a stray cat.”