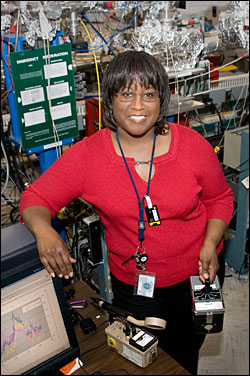 Kim Hayes, a radiological control technician at the National Synchrotron Light Source (NSLS), spends much of her workday checking the radiological materials that come in to the NSLS, conducting radiological surveys on the beam lines, and issuing dosimetry badges. She is also a member of the U.S. Department of Energy's Radiological Assistance Program, a group of professional and technical first-responders who evaluate radiological emergencies. But in her off-duty hours, Hayes likes to dance, go to the movies, and generally have fun.

Having a difficult time finding others to join in her social activities, Hayes decided that there must be other singles at the Lab looking to get out and enjoy life. So in November 2007, she took the initiative and formed a new group - the BERA Singles Social Club.

To date, the club has 35 members who have already enjoyed ballroom dancing classes, bowling, and dinners at local restaurants. Said Hayes, "The purpose of the club is not to make matches, but to get members to participate in group activities."

Hayes came to the Lab in 2002 as a guest to take a three-month computer class. At the completion of that class, she submitted an application to Human Resources and was pleasantly surprised when she received a call a week later, asking if she was interested in the Lab's Radiological Control Technician Apprenticeship (RCTA) program. Before that, Hayes had been working in a medical office but she seized the opportunity when offered a place at BNL. "The Lab offered me a new career and I am very grateful for the opportunity," she said.

Together with other members of the BERA Singles Club, Hayes is coordinating upcoming events including a night out to see That 70s Band, a comedy show, and a music and laser light show. Hayes is also coordinating a bus trip to Pennsylvania for the Abraham and Sarah Christian dinner show, which is open to everyone. There is no age limit and Hayes urges any single BNLer to join the club. Outside members are welcome, but only if they are sponsored by a BNL employee. The Club meets at 5 p.m. the second Friday of the month at the Brookhaven Center.

Said Hayes, "I have already met so many wonderful people at the Lab who I wouldn't have had the opportunity to get to know otherwise. Each member has brought ideas to the table and we are well on our way to enjoying the benefits of a successful BERA Club. So far, it's been a fun ride. Come join us."