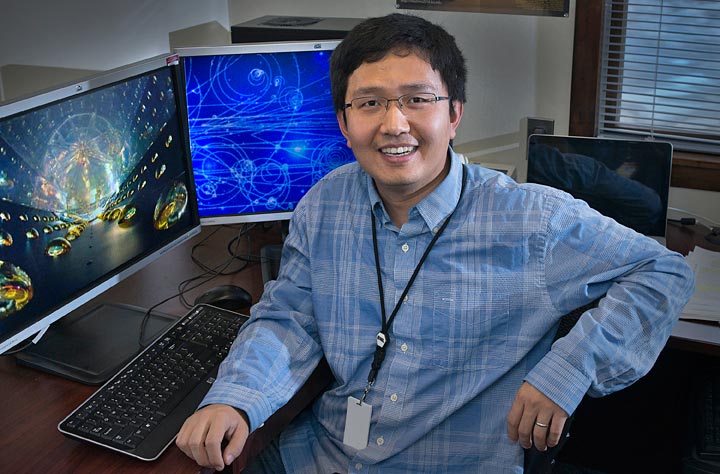 According to scientific theory, matter and antimatter were created in equal quantities immediately following the Big Bang, yet everything we touch, feel, and see in the universe today is made of matter. Where such asymmetry comes from—why there is more matter than antimatter—remains one of the biggest mysteries in physics.

Brookhaven Lab physicist Xin Qian will present the 2015 Sambamurti Memorial Lecture, titled “Seeking the Origin of Asymmetry,” on Tuesday, July 21. The talk will be held in the Physics Department’s large seminar room in Bldg. 510 at 3:30 p.m.

During this lecture, Qian will explain the process physicists use to design a scientific experiment aiming to address the question of why we are made of matter, not antimatter. He will then review scientists' progress and discuss the challenges for the future.

Qian works to develop detectors to measure fundamental particles called neutrinos for experiments such as the proposed Deep Underground Neutrino Experiment, which has grown from a former collaboration called the Long-Baseline Neutrino Experiment. Neutrinos—and results from this experiment—could be key to understanding how the universe evolved just after the Big Bang as well as why the world is made of matter.

Qian earned a Ph.D. in experimental nuclear physics from Duke University in 2010 after earning a B.S. in physics from Peking University in China in 2003. He was a Robert A. Millikan Postdoctoral Scholar in Experimental Physics from 2010 to 2013 at California Institute of Technology. In 2013, Qian arrived in Brookhaven Lab's Physics Department as a research associate and was made an assistant physicist later that year.

The Sambamurti Memorial Lecture was established in 1992 to commemorate the work of Aditya Sambamurti, a young Brookhaven physicist who died of cancer in 1992 at age 31. Each year, an outstanding young physicist whose professional interests overlap those of Sambamurti is selected to deliver the lecture.