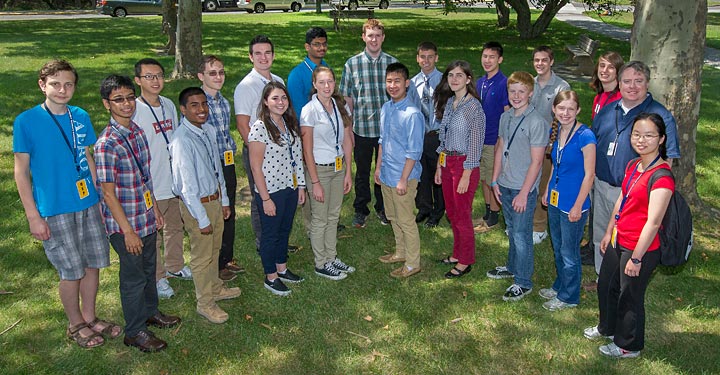 Last week, 19 Long Island high school students completed a two-week workshop designed to teach them the basics of computer programming for scientific research. With this new program, the U.S. Department of Energy’s (DOE) Brookhaven National Laboratory looks to use its resources to begin to fill a gap in public science education while also building a pipeline to help identify and train the computer-literate researchers of tomorrow.

"In science, when you're discovering some unknown law of nature, you can't just look at it in a textbook. You have to write the textbook."

“The idea for this course actually came from the scientific staff members that participate in our educational programs—the scientists who mentor students from high school up through grad school,” said Scott Bronson, the manager of K-12 programs in Brookhaven’s Office of Educational Programs. “They were telling me that it would be great if the students had a little bit more background in computational sciences or were literate in coding before they came here. This was something we thought we could offer the local community, because computational science is a strength of ours.”

A key idea of the course is that today’s most challenging scientific questions require computational resources to solve. The complexity of calculations and the sheer amount of data that scientists must contend with as they probe the nature of the universe means that computers are vital allies, no matter what field a researcher might be exploring.

“Whether you’re going into physics, biology, chemistry, materials science, atmospheric science, or climate change, computational science is now everywhere,” said Bronson. “Having computer programming skills is not an optional thing—it’s a prerequisite. This program is helping to develop the nation’s next generation of scientists and scientific facility users and meet the growing needs across research supported by DOE’s Office of Science.”

During the two-week course, the high school students were introduced to problems that would flummox many adults. The students covered 35 total lessons, many of which involved math at a graduate school level. For Dave Biersach, a senior technology engineer at Brookhaven who served as the instructor for the school, setting these kinds of challenges allowed the students to unlock potential they might not always be able to show in a traditional classroom setting.

Indeed, the course isn’t just about teaching the specifics of computer programming—even with eight-hour days, there’s only so much ground a course can cover in two weeks. It’s also about teaching the students new ways to think about problems without obvious solutions.

“You can’t shy away from asking kids to push the boundaries, and you can’t spoon-feed them,” said Biersach. “Too often it’s, ‘Here’s the equation, plug in your numbers, and off you go.’ But for what science needs, you have to have that creative spark. You have to solve problems that haven’t been solved. And there may not be an immediate answer. You need to sit there and think about it, you have to really work at it. Those are the kinds of problems we’ve asked them to solve, and they’ve done an amazing job.

“These are open-ended questions,” said Biersach. “There’s not a well-known path on how to solve them, and that’s how science is when you’re discovering some unknown law of nature. You can’t just look at it in a textbook. You have to write the textbook.”

The Lab provides a unique environment for the students to learn. As part of their studies, the students visited the RHIC and ATLAS Computing Facility (RACF)—the central computing hub for Brookhaven’s own Relativistic Heavy Ion Collider (RHIC) and for the United States-based collaborators on the ATLAS experiment at the Large Hadron Collider at CERN.

They also heard guest lectures given by Brookhaven scientists. These ranged from a talk by Mickey Chiu, director of operations for RHIC’s PHENIX experiment, on the statistical analysis behind the discovery of the Higgs boson, to one by Michael De Phillips of the Counterintelligence Directorate on the computer programming that underpins cybersecurity.

The atmosphere of the Lab was also an essential part of the course, as Biersach and the Brookhaven team worked to immerse the students in a collaborative research environment.

“We had the students take breaks and just talk, because that’s also what scientists do,” Biersach explained. “They have to collaborate. When they have ideas, they get together and it’s an open sharing, and they help each other. That collegiality is good for the kids to foster.”

Many students highlighted these experiences as an essential part of the course.

“The lab is a great learning environment,” said student Meghan McLaren. “Everyone here wants to discover more and more about the world we live in, so they’re really excited about what they do.”

“I really like the atmosphere,” added fellow student Bradley Wellman. “It’s not profit-driven. Everyone is here to help each other. Everyone is really passionate about science.”

The scientists who have come and visited this workshop have also enjoyed participating in it, and many students are hoping to return to the Lab either for more advanced computational science courses or for science internships.

As challenging as the course was, the organizers were careful to put together a curriculum that would be accessible to students irrespective of their previous knowledge. Students could come from any grade level as long as they knew trigonometry, and there was no expectation that they had done any computational science work before; indeed, not every student even had a home computer.

Said student Genevieve Rappold, “I had never programmed before, so I really jumped in there! Now I love it. It was just so fascinating to see how we could plot the math equations and really see what we were doing.”

With this foundation now in place, the Lab hopes to push further in future summers. Biersach suggested that an intermediate-level course could incorporate calculus and physics topics that weren’t included in this introductory course, while an advanced-level course would see students paired with Brookhaven scientists to receive mentoring and work collaboratively to solve real scientific problems.

“The students would handle the computer science stuff for the scientist,” said Biersach. “It would be a great way to get the kids accustomed to the terminology of the science. And they hopefully can also make the scientists more productive, because they’re handling a lot of the programming tasks.”

Biersach also sees potential to take the knowledge built up from this summer school and bring those lessons to public schools. With the curriculum and practical exercises now in place, local educators could eventually use them to set up computing clubs at their schools, or even offer full courses based on what Brookhaven has done in the last two weeks.

“We’re only one lab, and Brookhaven is one of the first to actually have had a course where we’re offering it to high school kids for this topic,” said Biersach, “but ultimately this belongs with the local school districts. What a great partnership they could have with the Lab. We can provide them specific guidance and suggestions based on what we know we need here at the Lab, and what scientists around the world have to do.”

While it will take some time to build up the program both at the Lab and beyond, Biersach is encouraged by these first results.

As he put it: “I think this class has made this first group of students realize, ‘I can handle this. I can do this.’ If creating that spark, just turning on that pilot light, is what we’ve achieved, then we’ve made a lot of progress.”