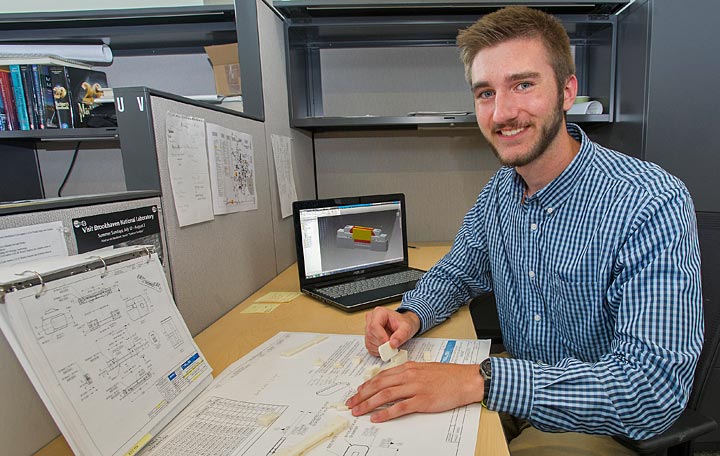 Brandon Bozeat with models of magnet components designed to pump up the brightness of x-rays generated at NSLS-II.

Brandon Bozeat’s internship at the U.S. Department of Energy’s Brookhaven National Laboratory has been more than 10 years in the making. As an elementary school student growing up on Long Island, Bozeat and his family visited the Lab for Summer Sundays open house tours. While there, he got a chance to tour the Relativistic Heavy Ion Collider (RHIC), a particle accelerator that recreates conditions of the early universe in particle smashups so scientists can study the building blocks of matter.

“RHIC was really inspirational to me as a young child,” Bozeat said. “Seeing how cool and massive the RHIC infrastructure is was something that made me want to pursue science and technology as I grew up.”

“The SULI program opened up a door for me…It’s given me a lot of insight about practical engineering design and application to my education.”

Now a junior majoring in mechanical engineering at Worcester Polytechnic Institute, Bozeat saw an opportunity to learn and to collaborate at the very place where his love of science was crystallized. The Department of Energy’s Science Undergraduate Laboratory Internships (SULI) program, administered at Brookhaven by the Office of Educational Programs (OEP), provided him with a chance to spend this past summer at the National Synchrotron Light Source II (NSLS-II), an electron accelerator that generates beams of x-rays and other forms of light for studying all manner of materials.

“Knowing the Lab existed right in my backyard, I figured what could be a better place to learn,” he said. “The SULI program opened up a door for me.”

SULI paired Bozeat with NSLS-II engineer Christopher Eng, who enlisted the student’s help in designing the magnet assemblies that comprise NSLS-II’s undulators—devices that wiggle the electron beam to emit brighter x-rays. This project, Bozeat said, allowed him to get his feet wet in all aspects of the light source’s engineering process, with a particular emphasis on the collaborative environment between physicists and engineers.

“The DOE SULI program is a fantastic program through which wonderful students with great potential like Brandon can turn from observer into collaborator in world-class research and development,” said Eng. “This program strongly represents the idea that science is for everyone. As mentors, it reminds us of our responsibility and commitment to inspire and prepare future generations for working toward a better world. For the Lab it forms a solid foundation from which our work will be continued and from which science will be built upon in the future.”

At NSLS-II, as the accelerating electrons change direction as they move through the storage ring, they give off light. That light will be in the x-ray part of the electromagnetic spectrum, though the various properties of the particles will determine the precise nature of that x-ray light. To achieve greater control over the types of x-rays produced, scientists and engineers at NSLS-II are experimenting with new types of magnet assemblies.

The experimental magnet assembly Eng and Bozeat were working on is known as a segmented adaptive gap undulator. By arranging the magnets in a row so that some are closer together than others, the researchers can take full advantage of certain long straight sections in the storage ring to produce brighter x-rays at a range of energies. These closely placed magnets produce the strong magnetic fields needed to create the brightest synchrotron x-rays. However, the magnet arrays must not directly obstruct the electron beam. So Eng and Bozeat were working on a multi-segmented undulator where the spacing between the magnet arrays could be varied to follow the shape of the beam without creating obstructions.

Ultimately, these undulators will enable NSLS-II researchers to perform a far greater range of possible measurements and analyses at the various experimental end stations at NSLS-II.

Engineering at the Light Source

How precisely did Bozeat’s contributions as an engineering intern at NSLS-II help improve the magnets? For that, we have to look beyond the more theoretical physics side of the issue, as that’s only the beginning of the process of translating ideas into reality.

“This is an experimental design, so the physicists run simulations in software,” Bozeat explained. The physicists decide the optimal design parameters for the magnet core assembly, then provide Eng and Bozeat with specific parameters including dimensional requirements.

The actual materials involved are crucial, and Eng and Bozeat worked to make sure the physicists’ designs would work with the magnets in real-world conditions. The poles of the magnet core assembly are composed of an experimental material, while the clamping system that holds them in place is made of aluminum. All these materials need to fit together properly and function inside the vacuum of the storage ring.

“What I’ve been mostly doing is adapting Chris’s models to the smaller magnets,” he explained, “which sounds simple at first but then you realize there are a bunch issues with geometry, and how things transfer over in the design software. Chris has also been having me look up the standards and regulations on materials selection and manufacturing processes, just so I can learn about what’s involved in design and specifically for vacuum design for ultra high heat and for synchrotron radiation.”

Bozeat’s internship provided him with an opportunity to apply what he’d learned in classroom settings in a much more focused, hands-on environment. But while past research and existing guidelines can provide a powerful context in which to learn and do science, working at the cutting edge of science means there may be questions that don’t yet have answers.

“Undulators have been designed before, but this is an experimental design so it’s very original, so we learn as we go and figure out things.”

What’s really remarkable, Bozeat said, is how much the knowledge he has gained from working at Brookhaven will apply elsewhere.

“This project is so specific, but at the same time I’ve drawn so much from much broader areas like material science.

“It’s given me a lot of insight about practical engineering design and application to my education,” he said. “So whether I’m here again or not, wherever I go, I’ll have this first experience actually doing engineering for a purpose at NSLS-II.”

Bringing his experience full circle, Bozeat had the chance to pay forward his own formative introduction to science by showcasing NSLS-II to young visitors during this year’s Summer Sundays.

“I gave this presentation to give a little taste of the project to the public, answer some questions, and give some exposure to what we’re doing,” he said.

Who knows? Perhaps one of the young elementary school students who attended Bozeat’s presentation will be sitting exactly where he is in another ten years.

Brookhaven National Laboratory is supported by the Office of Science of the U.S. Department of Energy.  The Office of Science is the single largest supporter of basic research in the physical sciences in the United States, and is working to address some of the most pressing challenges of our time.  For more information, please visit science.energy.gov. RHIC and NSLS-II are DOE Office of Science User Facilities.