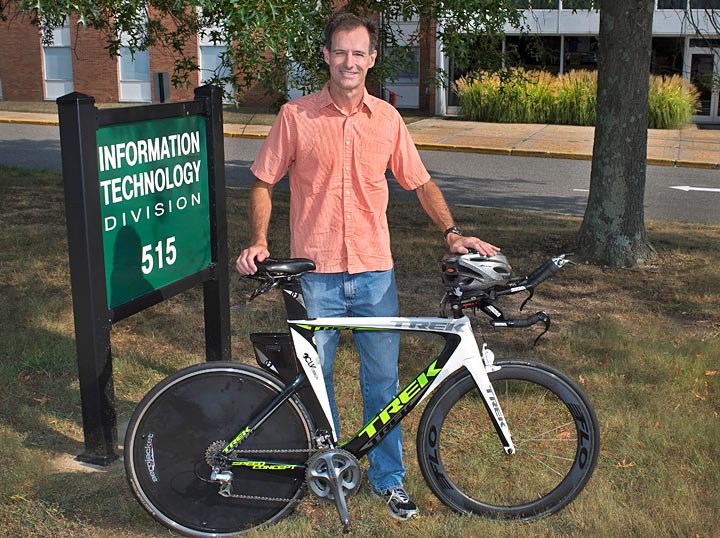 Ian Ballantyne will compete in the world championship triathlon in Australia in September 2016. For the 56-mile ride, he will use a 20-speed lightweight carbon fiber bike.

When Ian Ballantyne isn’t busy protecting the Lab’s websites, computer infrastructure and networks from “cyber intrusions,” he will hop on his bicycle and pedal for a few miles. Well, more than a few miles. Afterwards, there’s a good chance he will do [many] laps in the pool, and then put on his running sneakers and hit the pavement not stopping until he knows he has done his best. It’s Ballantyne’s dedication to these three sports that earned him a spot on the competitors’ list for the 2016 World Championship Triathlon.  Ballantyne competed against nearly 2000 overall contestants (110 in his age group) to be selected as one of the 30 from that race to compete in the world competition scheduled to be held in Australia on September 4, 2016. As luck would have it, Ballantyne was born in Australia and says he is looking forward to returning there for the competition.

Ballantyne has participated in many competitions in the northeastern United States over the past seven years, but the upcoming world championship will be his toughest competition.

“I became interested in doing triathlons a few years ago,” said Ballantyne. “I was swimming in the Lab pool regularly and then I started riding my bike to work, so figured I could add in the running and I’d be doing my own personal triathlon.” He upgraded to a 20-speed, lightweight carbon fiber racing bike, and started training seven days a week. 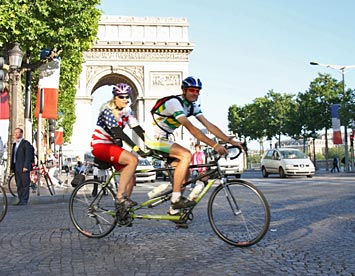 Ian Ballantyne and his wife Joan ride their tandem bike while visiting Paris in 2010. The Champs-Élysées with the Arc de Triomphe is in the background.

Ballantyne rarely takes breaks from his exercise regimen. Even vacations are often bike tours on the tandem bike that he and his wife Joan ride, with the next one planned for early October in Europe. “It’s hard to explain, said Ballantyne, “but the sense of accomplishment and the challenge of competition keeps me training and coming back for more. This world championship promises to be tough, but it will also give me a great feeling of accomplishment. For me, it’s not about where I place, it’s about doing my personal best.”

Good luck Ian.  We’ll be rooting for you next September.