On Behalf of the Nation, 'Thanks'

"I want to thank each and every one of you for what you do every day on behalf of our nation."

Upon her arrival at Brookhaven, the Deputy Secretary participated in an overview discussion about the Lab with representatives from the DOE Brookhaven Site Office, the Lab leadership team, and Stony Brook University.  She then toured the National Synchrotron Light Source II (NSLS-II), Center for Functional Nanomaterials (CFN), and STAR detector at the Relativistic Heavy Ion Collider (RHIC)—all DOE Office of Science User Facilities—meeting scientists, students, and users along the way.

Sherwood-Randall also joined Suffolk County Executive Steve Bellone and Deputy for Economic Development Joanne Minieri for a discussion about the Lab’s campus development plans and its Discovery Park proposal, through which the Lab would work in concert with local, state, and regional governments, public agencies, and private investors to repurpose and redevelop the 40-acre apartment area on the Lab site.

After her tour, Deputy Secretary Sherwood-Randall hosted an all-employee meeting (see the video above) in Berkner Hall with more than 600 members of the Lab community, including those who attended in person and through a live webcast on the Lab's intranet. Lab Director Doon Gibbs thanked members of the Lab community for their continued commitment to safety—and their particular efforts in reducing the number of slips, trips, and falls—as he welcomed Sherwood-Randall to the stage.

"Today I was able to see firsthand remarkable work that you're doing on behalf of our nation, from nanoscale to cosmic scale, and in areas of nuclear physics and chemistry, materials science and biology, medicine, applied science, and advanced technology," Sherwood-Randall said in opening the all-employee meeting. "It sounds kind of corny given the department for which we work but there is so much energy at this Lab, it's exhilarating to be here.

"I couldn't think of a better place to finish my first lap around the labs to see the unique capabilities that you have here that reach into so many dimensions of our mission," she added before describing some highlights of her visits to all 17 DOE national laboratories across the country. 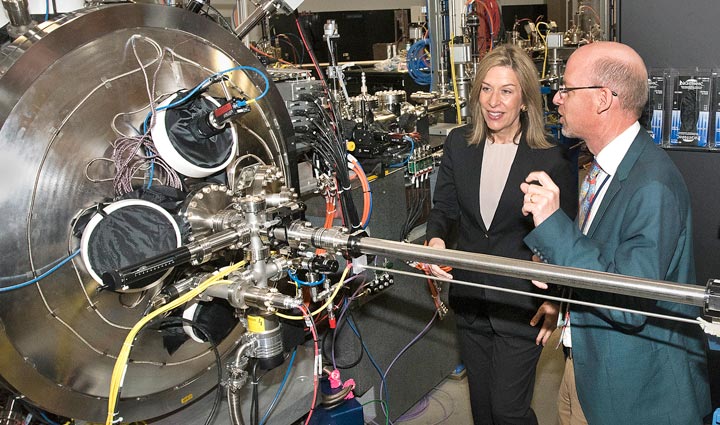 Sherwood-Randall then discussed the facilities she visited at Brookhaven, including NSLS-II, where first light was achieved in October 2014 after the large construction project came in on time and under budget. Researchers at NSLS-II will drive abundant, safe, and clean energy technologies for the future through major breakthroughs to enhance the nation’s energy security, while also working in critical scientific areas such as environment and human health. 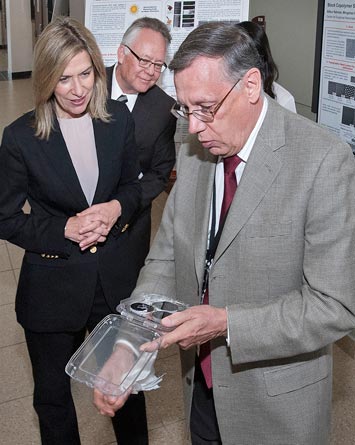 Sherwood-Randall next described the CFN at Brookhaven, one of DOE's five major facilities for nano-scale research. She explained how researchers at the CFN are working to understand the chemical reactions and physical structures of materials spanning just billionths of a meter, and how these phenomena can be exploited to address the nation's energy challenges.

Sherwood-Randall then highlighted RHIC, which she described as one of DOE's crown jewels. RHIC is where scientists got their first glimpse of the "perfect liquid" called quark-gluon plasma, which arose in the universe just moments after the Big Bang. Scientists at RHIC are helping advance understanding of why the physical world works the way it does, from the smallest subatomic particles to the largest stars.

"New technologies and computational techniques you're developing also benefit many other fields including space exploration, energy storage, and medicine," she said. 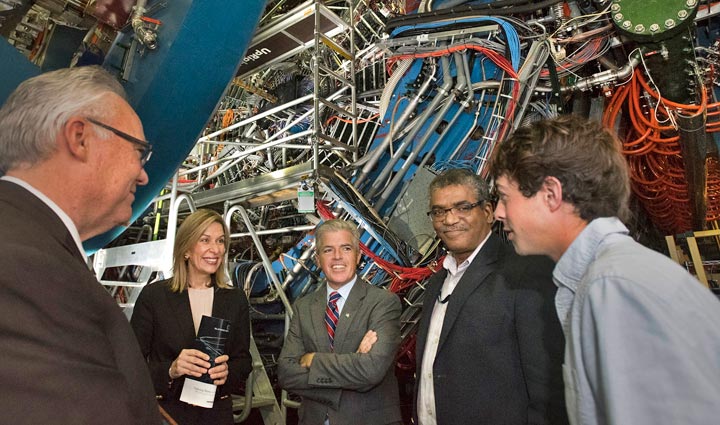 From left, Lab Director Doon Gibbs, Deputy Secretary of Energy Elizabeth Sherwood-Randall, and Suffolk County Executive Steve Bellone talk with Roy Lacey and Benjamin Schweid of Stony Brook University while touring the STAR detector at the Relativistic Heavy Ion Collider (RHIC). During an all-employee meeting later that day, Deputy Secretary Sherwood-Randall referred to RHIC as one of the Department of Energy's crown jewels.

On Behalf of the Nation, 'Thanks'

"What's most impressive about our laboratory network is not those cool gadgets: It's our people," Sherwood-Randall said before concluding the all-employee meeting.

"What we do is fundamentally a product of our great minds. People develop, operate, and analyze the information gathered by this advanced equipment and people make the commitment to be a part of this mission, and together we are greater than the sum of our parts," she said. "I am truly honored to be able to lead a workforce such as the one that we have here at this Lab and across the Department of Energy, and I want to thank each and every one of you for what you do every day on behalf of our nation."