To build accurate climate models, scientists require atmospheric data from all corners of the globe—from tropical oceans to the frigid Arctic. Engineers at the U.S. Department of Energy’s (DOE) Brookhaven National Laboratory are leaders in building mobile laboratories designed to gather relevant data from remote regions. Their latest creation is a revamped Aerosol Observing System (AOS) commissioned by DOE’s Atmospheric Radiation Measurement (ARM) Climate Research Facility, which contains over a dozen instruments for collecting data on aerosols, tiny particulates in the atmosphere that can have a big impact on climate. These instruments are mounted inside a modified shipping container designed to withstand the harshest weather conditions on Earth, from tropical hurricanes to Arctic blizzards.

“It’s basically a lab that you can ship anywhere,” said Ernie Lewis, a researcher in the Environmental and Climate Science (ECS) Department at Brookhaven Lab. “It is fully operational in less than four hours and all you need is internet and power.”

This AOS, the fifth such system designed and built at Brookhaven Lab, incorporates many modifications to improve its portability and ease-of-use in the field.

It even comes with remote control.

“Once the unit is set up, I can turn everything off and on from my desk here at Brookhaven,” said Scott Smith, a research engineer and leader of the AOS design team.

In early March, the new AOS will be shipped to the ARM Southern Great Plains site in Oklahoma, where it will undergo testing before being deployed to the third ARM Mobile Facility (AMF3) in Oliktok, Alaska. As part of the ARM North Slope of Alaska site, the AOS will join a suite of other meteorological instruments gathering data on clouds, precipitation, solar, and thermal energy, and basic weather patterns.

Clouds play a significant role in Earth’s climate by altering the amount of sunlight that reaches the surface.

To detect the aerosols, air is drawn into the AOS through a twenty-foot tall pipe called the stack. Once inside, a network of hoses then carries the particles to the various instruments, which measure the particles’ composition, size distribution, and ability to scatter and absorb light.

“To make accurate predictions about climate, we need good data. And right now we don’t have good data for how many particles there are or what types there are in the North Slope of Alaska,” Lewis said.

Designing for the Field 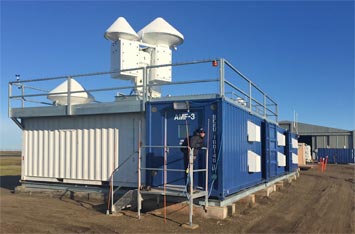 The mobile units must address the unique challenges of working in the field. For example, activities that may be relatively simple in a controlled laboratory environment, like replacing a malfunctioning fan or broken instrument, are more difficult at remote sites, where users may face finicky power supplies, extreme temperatures, or hurricane-force winds.

Smith says the team designed the new AOS based on feedback from scientists and technicians with first-hand experience operating the previous versions of this system. Simple adjustments, like rearranging instrument racks, adding slide-out drawers, and incorporating back-up power systems, can make a big difference when something goes wrong at a remote location.

“They may look like minor tweaks, but if you are out there working for a year, they will help,” said Lewis.

The main obstacle remained cramming a full suite of instruments into an 8 x 8 x 20-foot shipping container, which the Brookhaven engineers refer to as a van.

“The stack is located at one end and it really made a challenge for where we were going to put the racks and how we were going to support the stack to withstand 130-mph hurricane force winds,” Smith said.

The team is currently designing another new AOS to be deployed to ARM’s Southern Great Plains site in north-central Oklahoma. The data collected at all sites are uploaded to an archive where they are freely available to all, and are used by scientists around the world to improve climate models and predictions.

The ARM Climate Research Facility is a DOE Office of Science User Facility. The ARM Facility is operated by nine Department of Energy national laboratories, including Brookhaven National Laboratory.