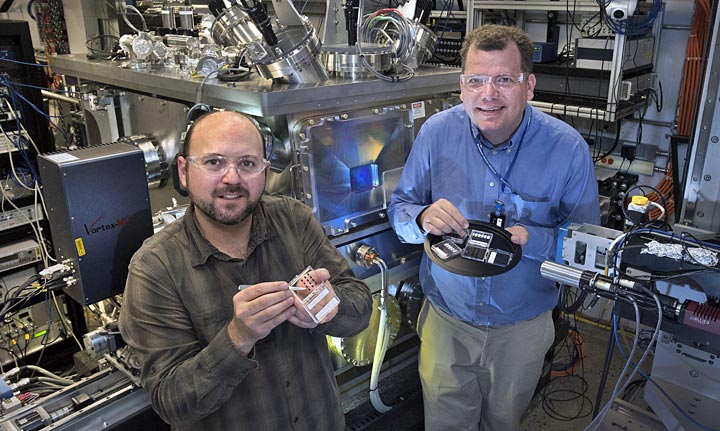 Ryan Tappero, the lead scientist at the X-Ray Fluorescence Microprobe (XFM) beamline at the National Synchrotron Light Source II (NSLS-II), and Jason Unrine, an assistant professor in the University of Kentucky's Department of Plant and Soil Sciences studied the ecotoxicity of nanomaterials that are used in commercial products at the Hard X-ray Nanoprobe beamline.

Ryan Tappero, the lead scientist at the X-Ray Fluorescence Microprobe (XFM) beamline at the National Synchrotron Light Source II (NSLS-II), and Jason Unrine, an assistant professor in the University of Kentucky's Department of Plant and Soil Sciences, recently completed beam time at the Hard X-Ray Nanoprobe (HXN). Tappero and Unrine were co-principal investigators on a project to elucidate the mechanisms of nanoparticle uptake by plants.

They are also members of the Partnership for Earth, Environmental, and Planetary Sciences (PEEPS), a Partner User Consortium for the XFM beamline led by Steve Sutton from the University of Chicago's Center for Advanced Radiation Sources. The XFM beamline is under development and will be open for scientific users in 2017.

Additionally, Unrine leads the “Cellular and Organismal Responses” research theme for the Center for the Environmental Impacts of NanoTechnology, a research consortium funded by the National Science Foundation (NSF) and the U.S. Environmental Protection Agency (EPA). An NSF grant called NanoFARM (Fate and Effects of Agriculturally Relevant Materials) funded the experiment they completed at the HXN beamline.

What are you studying at NSLS-II?

We are studying the ecotoxicity of nanomaterials that are used in commercial products such as cosmetics, fuel catalysts, semiconductors, and drug carriers. We are also studying the mechanisms of nanomaterial uptake by soil organisms and crop plants. The manufacture, use, and disposal of these products inevitably leads to the release of nanomaterials into soil and water resources. Most are captured by industrial and municipal wastewater streams, where they enter water treatment facilities and partition into sewage sludge (also known as biosolids), which is often applied to agronomic systems as a fertilizer amendment. Nanomaterials in biosolids have the potential to enter the food web; therefore, understanding the abundance and localization of nanomaterials in the tissues and cells of exposed organisms can shed light on their possible transformations, toxicity, and potential for transfer via the food web. Other materials, like the cerium dioxide (CeO2) we studied at the HXN (which is used as a diesel fuel catalyst), may be directly deposited on soils through diesel fuel emissions.

We studied CeO2 particles with primary particle diameters of 2-4 nanometers. We investigated the biological mechanisms of uptake and radial transport from the epidermis of tomato roots to their steles, or central cores. In other words, we were looking at the pathway the nanomaterials take from the surrounding environment to the center of the root, where they can be transported into the edible parts of the plant. We synthesized nanomaterials functionalized with polymer coatings to give them positive, negative, and neutral surface charge. Greenhouse experiments showed substantial differences in shoot and root uptake of the three different types of engineered nanomaterials. We were looking for evidence of two transport methods: symplastic (from cell to cell via membrane channels that diffuse small molecules into the cytoplasm) or apoplastic (via the extracellular space between the cell wall and plasma membrane).

How is NSLS-II particularly suited to your research?

In our recent experiment, we were studying cell-to-cell transport of nanoparticles through plant cell-membrane channels called plasmodesmata, which are 50 nanometers in diameter, and nanoparticle diffusion through smaller pores in the plant cell wall that were 2-20 nanometers in diameter. The cell walls themselves are 100-200 nanometers thick. We needed the resolution offered by the HXN, which delivers world-leading imaging capabilities using absorption, phase, and fluorescence contrast mechanisms with a routine spatial resolution of 10 nanometers. No other hard x-ray microscope in the world is able to consistently deliver such a small x-ray beam. Some of the techniques we use include x-ray fluorescence (XRF) imaging and phase-contrast imaging; together, these techniques allow us to correlate trace elements in nanomaterials (detected by XRF) with cell structure and substructures (detected by phase contrast).

What is your background and how does it relate to your research interests?

I was trained as a chemist in the applied field of biogeochemistry. My research focuses on the transformation, speciation, and bioavailability of trace elements in soil and the rhizosphere (root zone), and the mechanisms of uptake, metabolism, and tolerance in soil organisms and plants. In essence, biogeochemistry is concerned with the cycling of nutrients and the fate and transport of contaminants in the terrestrial environment, including subsurface and groundwater zones.

As a child living in the foothills of the Santa Cruz mountains in California, a historical mercury mining area, I became interested in environmental chemistry because the creeks and rivers were impacted by mining activities and warning signs were posted along the banks to keep the public from eating the fish. Mercury is a highly toxic element that interferes with human neurological development; the major dietary sources of mercury are marine and freshwater fish, as a result of mercury bioaccumulation in the food web. Since these early memories, I have been interested in researching trace and toxic elements in the environment and methods to address anthropogenic sources of contamination.

I have a PhD in toxicology and later was employed as an analytical chemist, which is when I started getting requests from people to characterize manufactured nanomaterials for toxicity studies. This led to a broader interest in the field, and I wrote a grant proposal to the EPA to investigate the effects of nanomaterials in terrestrial ecosystems. That grant was funded back in 2007. This was just after my postdoctoral position ended, so I decided to make it a major focus of my career. Since then I have had numerous grant proposals funded on the topic and have collaborated with researchers all over the world to understand the environmental implications of nanotechnology.

Tracking nanomaterials in environmental and biological systems is extremely challenging and requires creativity and interdisciplinary thinking to achieve. I enjoy collaborating with the beamline scientists at NSLS-II to address this challenge. Working with people from other disciplines helps you to think about problems in new and productive ways. The CeO2 nanomaterials we were studying are also critically important because they are used as catalysts to increase fuel combustion efficiency and in semiconductor manufacturing. We uncover information regarding the environmental impacts of nanomaterials that helps to ensure their safe use. I feel like this is a very positive societal contribution that relates directly to food, water, and energy constraints.

What other researchers and/or students were part of this experiment?

This research is happening at the National Synchrotron Light Source II, a U.S. Department of Energy Office of Science User Facility that produces X-rays 10,000 times brighter than its predecessor (NSLS) and is the world’s brightest synchrotron light source.
Brookhaven National Laboratory is supported by the Office of Science of the U.S. Department of Energy. The Office of Science is the single largest supporter of basic research in the physical sciences in the United States, and is working to address some of the most pressing challenges of our time.  For more information, please visit science.energy.gov.