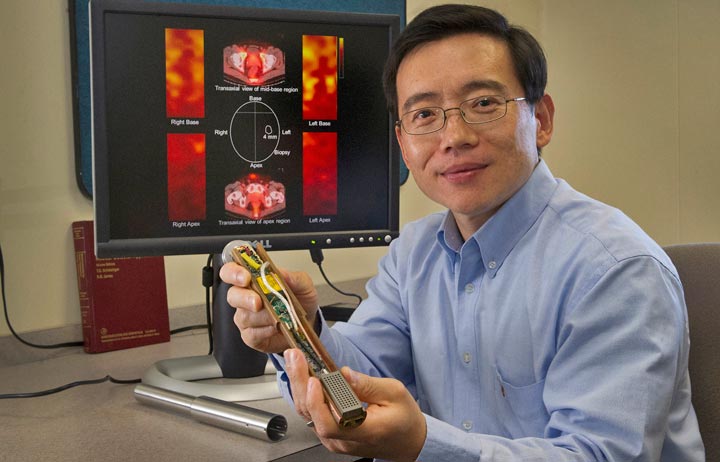 One man in seven—including fathers, sons, brothers, significant others, neighbors, friends, and coworkers—will be diagnosed with prostate cancer, according to estimates from the American Cancer Society. And among men, prostate cancer is only behind lung cancer as the leading cause of cancer deaths.

With the exact cause of prostate cancer unknown, preventing most cases of the disease is not possible. Detecting prostate cancer early is vital for treating it effectively and minimizing the side effects of treatments, yet today the disease in its early stage is diagnosed at rates that are disappointingly low. Building upon detector technologies used for identifying radiation and preventing the proliferation of nuclear materials, scientists at Brookhaven Lab have created the Proxiscan™ imaging system to help save lives by diagnosing prostate cancer with far better accuracy than techniques and technologies currently available.

Join Yonggang Cui of the Nonproliferation & National Security Department for the 510th Brookhaven Lecture, titled "A New Method to Diagnose Prostate Cancer," in Berkner Hall at 4 p.m. on Wednesday, Dec. 16. All are invited to attend this free talk, which is open to the public. Refreshments will be offered before and after the lecture. Visitors to the Lab 16 and older must carry a photo ID while on site. Add to calendar

Cui will begin this lecture with an introduction to prostate cancer, and a review of current technologies used to diagnose the disease. He will then explain how he and a multidisciplinary team of collaborators created the Proxiscan™ imaging platform—a compact, high-resolution digital gamma camera to image prostate cancer. Cui will also discuss results from clinical trials and possible additional applications for this technology platform to detect breast, ovarian, and other cancers as well.

To join Cui for dinner after the talk, contact Bonny Jean Forte (Ext. 6029).

Cui has more than 15 years’ experience with radiation detection and applications. He earned a Ph.D. in 2001 and master's degree in 1998—both in nuclear technology and applications—and bachelor’s degrees in nuclear electronics and computer science in 1996, all at Tsinghua University in China. He officially joined the staff at Brookhaven Lab in 2006 after time at the University of Houston.

Cui has been recognized with a number of awards and honors, including the Gordon Battelle Prize for scientific discovery and technology impact as well as Brookhaven Lab's Engineering Award, presented for significant accomplishments contributing to the Lab's mission. He and his Brookhaven Lab colleague Ralph James, also of the Nonproliferation & National Security Department, were named Men of the Year in Science by the Village Times Herald newspaper in 2009.