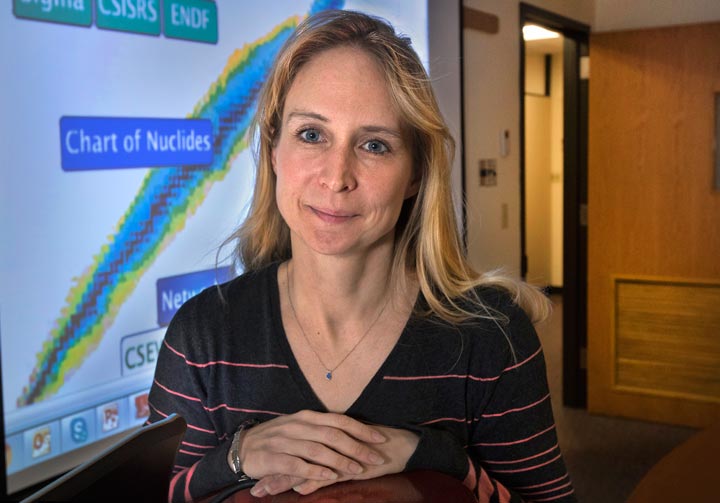 In a world where each square inch is showered by billions of tiny, elusive particles every second, scientists from Brookhaven Lab and institutions across the globe are looking for clues and looking for answers. Scientists are capturing those tiny particles, called neutrinos, and studying them to address some of the biggest mysteries in physics today. Interpreting their results through the National Nuclear Data Center at Brookhaven—where 100 years of nuclear physics research is archived, evaluated, and shared—what they find out along the way just might help save the world.

Join of Libby McCutchan of the Nuclear Science & Technology Department for the 511th Brookhaven Lecture, titled "Following Fission Fragments: Nuclear Data for New Neutrino Physics," in Berkner Hall at 4 p.m. on Wednesday, Jan. 20. All are invited to attend this free talk, which is open to the public. Refreshments will be offered before and after the lecture. Visitors to the Lab 16 and older must carry a photo ID while on site. Add to calendar

McCutchan will begin her talk by introducing the National Nuclear Data Center, the mysterious neutrino, and several major neutrino experiments dating from the 1950s to today. McCutchan will then explain how she and other scientists are using sophisticated databases from the National Nuclear Data Center to shed light on neutrinos for big questions not yet answered. She will also discuss how this research could be applied to technologies to identify materials being produced for nuclear weapons in order to help prevent them from falling into the wrong hands.

To join McCutchan for dinner at a restaurant off site after the talk, contact Letty Krejci (Ext. 5591).

McCutchan is an associate scientist at Brookhaven Lab. She earned three successive degrees in physics: a bachelor's degree from Wellesley College in 1999, and from Yale University a master's degree in 2003 and Ph.D. in 2006. While at Yale, McCutchan was a research assistant from 2002 to 2006 and a postdoctoral fellow from 2006 to 2007. She became a postdoc at Argonne National Laboratory starting in 2007 and continued there until she joined Brookhaven Lab in 2011. McCutchan is also assistant editor for the journal Nuclear Data Sheets.