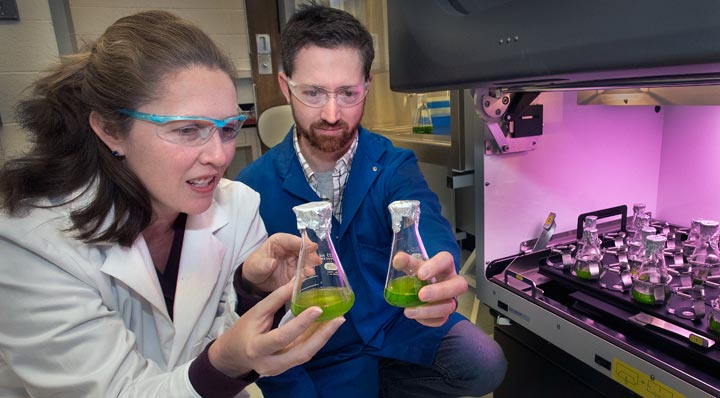 Ian and Crysten Blaby are exploring the genes of algae to better understand—and potentially improve—plants' ability to harness energy.

The U.S. Department of Energy’s Brookhaven National Laboratory welcomes two new biologists, Crysten and Ian Blaby, who have been brought to the Lab to explore the many genes that play a role in a plant’s ability to harness energy and what those genes could mean for enhancing bioenergy crops.

The organism that brought this dynamic duo to Brookhaven: an alga. Algae are photosynthetic organisms that can be studied to inform scientists’ understanding of how more complex land plants capture and convert energy from the sun. Crysten and Ian conduct lab experiments on a particular single-celled alga, Chlamydomonas reinhardtii, which has been the focus of thousands of studies by researchers who appreciate the benefits of a microbial system for exploring this complex biochemistry.

“Because of the simplicity and fast growth rates of single-celled algae relative to other plants, experiments can be performed at a greater pace. It is also easier to manipulate them and change their growing conditions,” said Ian. “Additionally, they take up much less space than land plants, making algae the perfect model system for our gene-focused research.”

You can think of the gene sequences as blueprints to what plants do. “If you look at any organism’s blueprints, half of it is written in a strange language that we don’t really understand,” said Crysten. “We are trying to provide a Rosetta Stone of sorts to try to start translating these blueprints.”

The couple are outfitting a laboratory in Brookhaven’s biology department with an advanced experimental platform to process thousands of samples at a time, helping them accelerate their research while avoiding the human error that such high-throughput studies are prone to. Rather than targeting a specific gene for deletion, they grow hundreds of thousands of mutants simultaneously to see which grow better in response to different conditions—such as temperature, light, and nutrient availability. 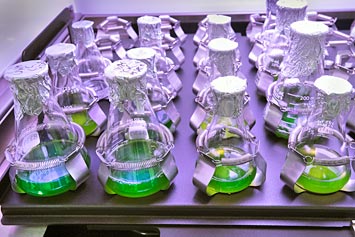 Dozens of flasks hold liquid cultures of Chlamydomonas reinhardtii, an algal species that serves as a model for understanding higher plants.

These large-scale experiments are feasible due to sample miniaturization and machinery that place the algae containing a wide range of random gene deletions throughout the genome into individual culture wells to see which have a survival advantage in response to, say, low levels of nutrients.

“If every single gene has been deleted at least once, we can identify all the genes involved in a process, such as acclimation to high salinity,” said Ian. “The method doesn’t rely on what we already know; this will get us to the 40 to 50 percent of genes we know nothing about.”

Crysten’s expertise is in the study of genes that regulate the levels of metals in cells, how organisms acquire metal ions from the environment, and how those processes are affected when conditions for the plant change. She hopes to track where the metals go when they enter plant cells by studying the proteins and pathways responsible for the trafficking, storage, and delivery of metal ions to target proteins.

“Not to mention photosynthesis itself, which would be impossible without metal ions,” she said. “Numerous essential chemical reactions in the plant are absolutely dependent on metal ions for catalysis and/or for making sure that many of the cell’s proteins fold properly.”

In April, she will be working closely with scientists at the National Synchrotron Light Source II (NSLS-II) to image metal ions in cells and see how the abundance and location of these essential protein cofactors change in response to environmental challenges. Ultimately, she hopes her research can be used to find ways for bioenergy crops to thrive on non-agricultural or “marginal” soil, which are typically poor in the essential inorganic nutrients that plants need to thrive.

Ian’s expertise is in plant metabolism. He is looking at photosynthesis and subsequent carbon usage—how plants create energy from sunlight, carbon dioxide (CO2), and water. He hopes to target the genes that make up the transporter proteins involved in that process to build up a more complete image of plant metabolism—and perhaps find ways to drive energy production toward products such as biofuels that would be useful for meeting our energy needs.

“If we can have an energy source that is being produced by plants, that would mean the carbon is being fixed via energy from the sun and taking CO2 out of the atmosphere,” he said. “So, when the energy source is burned, it’s only putting back what CO2 it took out in the first place; it’s close to carbon neutral.”

The Blaby’s were hired for their expertise in genomics along with a third scientist, Qun Liu, a structural biologist. They are eager to collaborate with other scientists at Brookhaven Lab and are hoping to partner with scientists at the Cold Spring Harbor Laboratory, as well.

“Biology is so complex. A lot of people think about things differently, and as scientists we can sometimes get tunnel vision,” said Crysten. “We need someone else to come along and say ‘think of it this way’ or ‘try this approach.’ We are always excited when an opportunity to collaborate arises.” Just recently the couple discussed ways to collaborate with scientists at Brookhaven’s Center for Functional Nanomaterials.

Ian and Crysten met at the University of Florida while researching bacteria. Before coming to Brookhaven Lab, they worked at UCLA. They have been married for six years and have a two-year-old daughter.