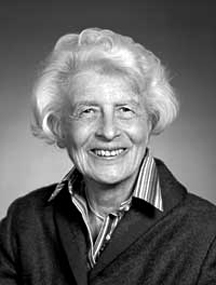 Funded by Brookhaven Science Associates, the company that manages Brookhaven National Laboratory, the prize has been created to honor late physicist Gertrude Scharff-Goldhaber for her outstanding contributions in the field of nuclear physics and also for her support of women in science.

The winner will receive an award of $1000 from a fund administered by Brookhaven Women in Science, and will be expected to give a seminar on her work at the award ceremony.

The deadline to apply is April 30, 2016.  The award recipient will be announced in June 2016 and the award ceremony will take place in the summer of 2016.

The $1,000 award is granted to a female graduate student in physics, who is recognized for her substantial promise and accomplishment. To be eligible, she must be an enrolled physics graduate student who is a candidate for a doctoral degree, but she should not be graduating with that degree before spring 2016. She must either be enrolled at Stony Brook University, or she should be performing her thesis research at BNL.

Nominations can be made by any member of the staff at Brookhaven National Laboratory or faculty of the Department of Physics and Astronomy at Stony Brook University.  The nominator should include a description of the candidate's accomplishments, and provide a list of her publications, along with copies of any papers to which she has made a substantial contribution. A copy of her graduate course transcript should also be included. The university must furnish verification of her candidacy and the expected date of receipt of the degree.