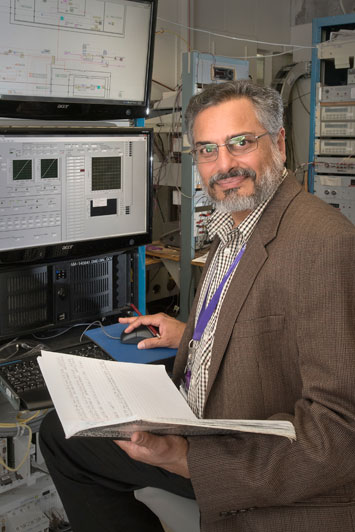 “Teaching is my passion, said Joshi. “I love to mentor summer students at Brookhaven. This gives me the satisfaction of a positive contribution to society and the next generation”

Joshi joined the Lab in 1988 and, among other honors, he and his colleagues were recognized with one of the DOE’s most prestigious awards for successfully developing magnets to enhance the reliability of the Large Hadron Collider, a high-energy particle collider near Geneva, Switzerland, used for exploring fundamental particles and questions in physics. He was also the recipient of Brookhaven Lab’s 2015 Engineer of the Year award.

Joshi received a B.S. in electronic engineering in 1981from SBM Polytechnic in Mumbai, India. In 1987, he earned a master’s degree in electrical engineering at NYU Polytechnic in Brooklyn, NY, and a doctorate at the same school in 1990.  He began his career in his native Mumbai as an electronic engineer for the Tata Electric Company, where he helped design and build AC and DC industrial motor drives for the steel and paper industries in 1981-82.  He subsequently spent several years at the Sharjah Power Station in the United Arab Emirates as an instrumentation and control engineer. Among other duties, he handled the maintenance and operation of gas turbines, steam turbines, turbo-generator sets, boilers, inverters, rectifiers, and a desalination plant.

Asian Pacific American Heritage Month, officially proclaimed by President Obama, is a celebration of the culture, traditions, and history of Asian Americans and Pacific Islanders in the United States. The May date was chosen because two important anniversaries occurred during this time: the arrival of the first Japanese immigrants in America in May 1843 and the completion of the transcontinental railroad by many Chinese laborers in May 1869.