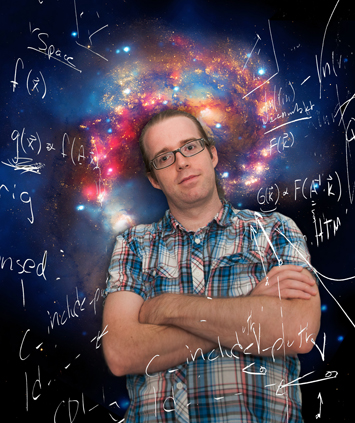 “Dr. Sheldon is at the forefront of cosmology research and is highly regarded by the most distinguished scientists in the field,” said Physics Department Chair Laurence Littenberg. “He is important to the Lab's future in cosmology and has a long, bright future ahead with the Dark Energy Survey (DES) and the Large Synoptic Survey Telescope (LSST).”

Sheldon is a recognized expert in weak gravitational lensing using huge cosmological data sets. His long experience began around the time that weak gravitational lensing was first used to study cosmology. Weak lensing is potentially the most powerful technique for studying dark energy. Although there is conclusive observational evidence that dark energy is the dominant constituent of the universe, we know very little about its properties. Understanding dark energy has been a key goal of Brookhaven’s astrophysics and cosmology initiative, begun in 2002. The three weak lensing surveys in Sheldon’s career—the Sloan Digital Sky Survey, the DES, and the LSST—are each more than an order of magnitude improvement over the previous one, and each is the premier survey of its era.

Sheldon earned his Ph.D. in physics at the University of Michigan in 2002 for his thesis work “Galaxies, Luminosity, and Mass: Gravitational Lensing Measurements of the Correlation between Dark and Luminous Matter.” He held postdoctoral fellowships at the Kavli Institute for Cosmological Physics at the University of Chicago from 2002 to 2005 and the Center for Cosmology and Particle Physics at New York University from 2005 to 2008. He joined the staff at Brookhaven Lab as an assistant physicist in 2008, became an associate physicist in 2010, and was promoted to physicist in 2012.