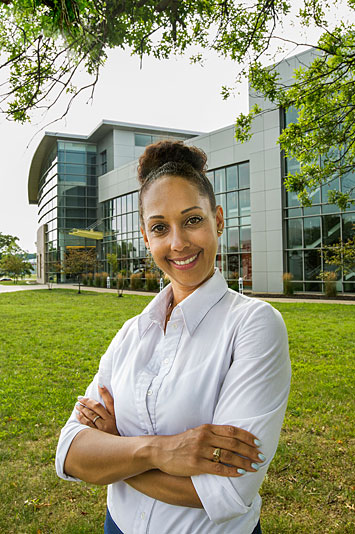 When Kahille Dorsinvil was about to start 10th grade at Newfield High School in Selden, she spent four weeks of the summer in what was then called the Minority High School Apprenticeship Program—now the STEM Prep Summer Institute—run by the Educational Programs Office (OEP) at the U.S. Department of Energy’s (DOE) Brookhaven National Laboratory.

“The idea was to promote science learning and give students a heads-up on the different kinds of science they were going to see in the rest of their high school career,” she said. “There was a little environmental science, some life science, a little biology…  just to encourage that continuation of science learning.”

Fast forward 10 years, and the Long Island native met a retiring OEP staff member who told her about the on-site Science Learning Center. Dorsinvil was soon to receive a graduate degree in adolescent education at Dowling College, and was immediately intrigued by the possibility of working as an educator at the world-renowned science laboratory. She had previously earned a multidisciplinary degree from Stony Brook University with concentrations in biology and physical anthropology, as well as African-American studies.

“It was good timing,” Dorsinvil said. “They were looking for staff and I interviewed to be a part-time educator and got the job! I was in that position for nine years, doing everything from teaching students and developing programs to conducting teacher-training workshops. I got an opportunity to really get involved with lots of different school districts and different grade levels. It was exciting.”

In 2015, Dorsinvil moved from the Learning Center to the Stakeholder Relations Office, where she is now in charge of coordinating the Lab’s Summer Sundays program, which allows families and other community members to spend four consecutive Sundays in July at Brookhaven.

“I was presented with the opportunity to experience the Lab from a different perspective and also to take the skills that I was developing in science communication and education and use them in a different sphere,” she said.

Dorsinvil had participated in Summer Sundays previously as a staff volunteer in the Science Learning Center, but she said supporting the program in her first year in the Stakeholder Relations Office was an eye-opener.

“That first year was pretty stressful,” she admitted, “It was all I could do to absorb it all – the planning, the scheduling, the transportation, the volunteers. This year I knew what to expect so I felt a lot more at ease. Luckily the program itself has been so well run in the past that everything was pretty much in place.”

Dorsinvil said one of her main responsibilities was coordinating with the facility leads. Three of the four Sundays feature one of the Lab’s DOE Office of Science user facilities – the Center for Functional Nanomaterials (CFN), the National Synchrotron Light Source II (NSLS-II), and the Relativistic Heavy Ion Collider (RHIC). Each of these has a designated staff member responsible for coordinating activities there.

“The tasks that take most of the energy and focus are the ones associated with the events that support the highlighted facility visits:  The Amazing Mr. Fish and other science shows in Berkner Hall — featured three times a day on each Sunday — the speakers, the buses, and the event staff that come in to help with crowd control and information,” she said.

“Kahille hit the ground running upon joining our team,” said Nora Sundin, manager of the Stakeholder Relations Office. “Her science communication skills and attention to detail are matched by her enthusiasm for promoting lab initiatives and programs.”

Dorsinvil said planning for next years program will begin six to nine months beforehand, since advertising sometimes must be ready in March to meet publication deadlines.

“By then, we need to know what days will feature what facilities,” she said. “Later on it’s more of a focus on filling in the details as the events get closer.”

In addition to the usual print and radio ads, Dorsinvil promoted the events on Facebook this year, and said the comments on the page were overwhelmingly positive.

“I think that it went great this year,” she said. “I had a really nice combination of tour workers with different skill sets who were all really interested in promoting science and the Lab.”

About 5,000 visitors attended over the four Summer Sundays.

“ You don’t know how many people are going to show up, and you don’t want to turn anyone away,” she said. ”But 1,000 people a day is a good number. I think it’s really important to keep the visitor numbers realistic so that everyone who’s coming is having a good time.”

Now that the Summer Sunday program is over for the year, Dorsinvil is taking on other new tasks as a tour escort for students and other groups visiting the Lab’s user facilities.

“The biggest challenge is finding a guide at the facility whose experience and approach matches the group that’s coming in,” she said. “We have a lot of college groups that come in with a very specific focus. In the process, I have become more aware of how many incredibly cool things are happening here at any given time. It’s exciting.”

“Visitors from college and community organizations are always inspired by the Lab’s facilities and endeavors and Kahille makes these visits especially memorable, not just for her careful attention to planning and details, but also for her warm, welcoming manner and natural curiosity and interest in science,” said Tara Shiels, the Lab’s tour coordinator and principal stakeholder relations specialist.

Her two daughters, 22 and 17, both went to Longwood schools and participated in Lab programs through their schools. They also attended BERA summer camp. The elder just received her associate’s degree in chemical dependency counseling and her interest in the field sprang from a high school summer program at Brookhaven where she heard a talk by former Brookhaven researcher Stephen Dewey.

“He gave so many interesting talks about the brain and addiction, and that made her interested in learning more about what happens and how she might help people,” Dorsinvil said.