Brookhaven Lab's David Diamond: A Half Century of Work on Nuclear Safety 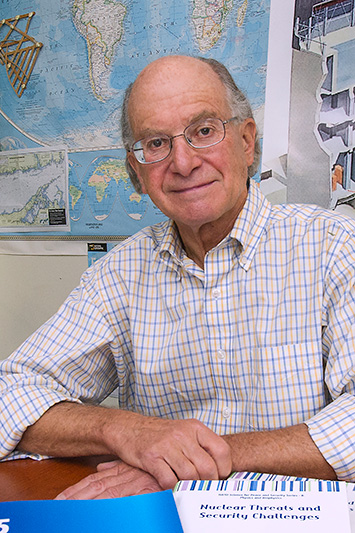 David Diamond of the U.S. Department of Energy’s (DOE) Brookhaven National Laboratory has one of the longest tenures at the Lab: In two years he will have been on staff in the Nuclear Science and Technology Department, where he is now Chief Scientist, and its predecessor groups for 50 years. During all that time, his focus has been nuclear safety, initially as a nuclear engineer concerned with the nuts and bolts of the reactors used for power and research, and currently on regulatory issues.

Over the years, his work has been funded by various agencies, primarily the Nuclear Regulatory Commission (NRC), but also the DOE and the Department of Commerce.

“My first assignment at Brookhaven was with the Atomic Energy Commission, pre- NRC, so I have been working continuously for the NRC and its predecessor with one project or another since my first day here,” Diamond said. “I focused my technical background in neutronics and reactor physics on the issues that arise surrounding the safety of different nuclear reactors.”

“I didn’t want to get a Ph.D until I had some additional experience and money to go back to graduate school so I took a job at Westinghouse Astronuclear Laboratory,” he said.  “I immediately saw that I needed that further education in order to do things that were really interesting. I began to apply to graduate schools a few months after I started working, and within a year I started at the Massachusetts Institute of Technology (MIT), which was a super experience.”

A lecture delivered by Herb Kouts, then chairman of Brookhaven’s Nuclear Engineering Department, led him to the Lab where he would do his life’s work.

“I was very impressed with the work that was going on at Brookhaven so I came here as a summer student and met some really sharp nuclear engineers working on the early generations of nuclear reactors being used for power applications and for research,” he said.

After finishing his degree, he got a job at Brookhaven “at a salary that people would probably laugh at these days. I have a very low life number because I had already been a student here. When people see my life number they think I was one of the original settlers,” he said.

“The major difference between then and now is that at that time we had more experimental facilities related to nuclear engineering,” he said.

The Department now emphasizes analytical work on new reactor designs and other aspects of nuclear engineering.

“Some next generation plants will use different types of fuel than what’s currently being used and different types of coolants other than water, which is most commonly used now. Fukushima has raised everyone’s awareness of nuclear safety, but there has always been a component of our work that emphasized the safety aspects of nuclear facilities. We have a stable of computer tools that we use and modify as necessary and we develop models with these tools that allow us to analyze the way neutrons, fluids and materials behave in reactors,” Diamond said. “We combine those models with work that our colleagues do on probabilistic risk assessment to see what some of the bottom lines are vis a vis safety and protecting the public.”

Diamond headed the Nuclear Energy and Infrastructure Systems Division in NSTD for many years, but surrendered his management responsibilities in 2010. More recently, he has shifted his attention to the policy questions involved in regulations the NRC might propose particular to new advanced technologies. A recently awarded $2.4 million project will allow him to continue his work for the NRC for the next two years, moving him away from hard technology towards the policy arena.

One particular advantage Diamond sees to working at Brookhaven is the ability to consult on outside activities in the field.  Over the years, he has worked for the simulation industry, generating training simulators for nuclear power plants around the world. He has also served as a consultant for regulatory authorities around the world, in particular the Canadian Nuclear Safety Commission.

In 2010, Diamond received the Tommy Thompson Award from the American Nuclear Society where he has been a Fellow for many years. Named in honor of Theos J. Thompson, an MIT professor and a member of the Atomic Energy Commission who made important contributions to nuclear reactor safety, the award recognizes individuals who have “provided outstanding wisdom and direction to key elements of world nuclear safety activities.”

Robert Bari, chair emeritus of the NSTD and now a senior physicist in the department, assembled the application nominating Diamond for the award. He has known Diamond for 40+ years, and although they have not collaborated on projects until just recently, they have been closely associated through the area of nuclear safety.

“Most of his work has been on safety and regulations of the current fleet of nuclear reactors, extremely important because we have about 100 operating in the U.S. and more than 400 worldwide,” Bari said.

“He’s a first-rate nuclear engineer, with very high energy and is enthusiastic about his work,” he added. “At the same time he’s very modest, he doesn’t oversell himself, probably undersells. I love interacting with him.”

“I of course don’t work in a vacuum,” Diamond said. “I work with teams of people who are the best in the field and have come to Brookhaven to share the environment with me. The environment here extends beyond just the computer tools and the technology and the smart people, to an atmosphere that really facilitates great work.”