Outstanding Brookhaven Mentor Aleksey Bolotnikov: 'He Taught Me How to Be A Scientist.' 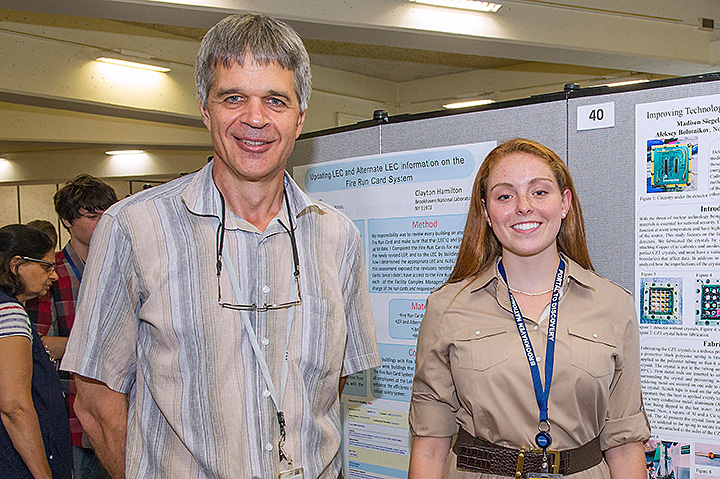 Aleksey Bolotnikov and Madisen Siegel at the student poster session.

Physicist Aleksey Bolotnikov has a long history of mentoring students, starting when he himself was still in high school. Today, he is one of the most highly regarded mentors at the U.S. Department of Energy’s (DOE) Brookhaven National Laboratory, where he works in the Radiation Detector and Nonproliferation Research & Development (R&D) Group in the Nonproliferation and National Security Department (NNS).

Bolotnikov works principally, but not exclusively, with cadmium-zinc-telluride (CZT) detectors and played a crucial role in shaping the direction of radiation detector research.

“I really like teaching because when you work in this environment you feel young,” he said. “The students kind of stimulate you. And one of the important missions of Brookhaven Lab is to teach young students and transfer knowledge from one generation to another. It’s very important.”

All of the nearly 20 students Bolotnikov has mentored (three or four at a time) have had some interest in detectors, but often they have had little knowledge about the detectors when they first arrive. While the students come from different levels of schooling and different levels of skill, they are made familiar with various technologies and methods for working with them.

“Our work is very narrow with specific applications for specific detectors in nonproliferation and national security applications,” he said. “These detectors are very expensive and are not widely used. But the technology that’s involved in the development of the detectors is very complicated.”

Madisen Siegel, currently a senior at Deerfield Academy in Massachusetts, spent this past summer as a High School Research Program (HSRP) participant and was part of Bolotnikov’s student team.

“It was all totally new to me,” she said. “I studied physics and chemistry in high school but never engineering of any sort. This program was something I could not have experienced in high school. We worked on radiological detectors using CZT crystals. We fabricated them and then tested them in a machine with a radioactive source.

Jamie Butcher was also mentored by Bolotnikov for two years during her early college days, and is now in a master’s program at SUNY Binghamton.

She said of Bolotnikov, “He was a fantastic mentor. He’s a great guy who is gentle and soft-spoken but he is highly educated, highly informed and works extremely well with everyone. I thoroughly enjoyed every second I spent at the Lab.”

Matthew Petryk, who will graduate from SUNY Binghamton in May with a BS in applied physics and a BS in electrical engineering, has been coming to Brookhaven to work with Bolotnikov since 2011. After his junior year of high school, he was accepted into Brookhaven’s HSRP.

“That was my first experience working with Aleksey,” he said. “Being a high school student, I lacked much of the technical skill required to contribute to the lab's projects at first.  Aleksey instructed me in the use of several pieces of equipment and set tasks for me that would be useful to the laboratory as a whole.  He also suggested topics I could explore separately.

“Most importantly, he worked closely with me throughout the entire summer, rather than setting me up with a task I could do myself and then leaving to work on other projects,” he said. “He was always available for questions and stopped to explain to me every aspect of what project he was working on, while he worked on it.  To a young high school student, his mentorship was invaluable - I would probably have gotten lost in the lab otherwise.”

After participating in a second year of HSRP, Petryk returned to the Lab without being specifically connected to an internship program.

“I came purely to continue my work with Aleksey,” he said. “He was that much of a pleasure to work with.  At this point, having helped me so thoroughly learn detector physics from scratch, he involved me more actively with his own personal projects.  I was assembling detectors and detector arrays individually, then he and I would test them together.  Once we collected enough data, Aleksey would take the data to his office to analyze.  I accompanied him and he explained the complicated analysis algorithms he was using.  I learned much about data analysis and signal processing from watching him work and by asking frequent questions.”

Petryk then participated in the Science Undergraduate Laboratory Internship program for two years, during which time Bolotnikov allowed him to take more of a leading role in some projects.

“He would set a task for me, such as to construct a cage for a detector array,“ Petryk said. “He would monitor my progress, and provide critique on the final result as well as my design process.  We would test our detectors and analyze the data together and separately.  He would challenge me to find improvements to the device and implement them myself. He helped me develop the professional skills I would need - technical paper writing and presentation preparation.  He asked me to draft sections for inclusion in papers he was to submit and provided feedback on my writing.  When he submitted these papers for publication, he included me as a co-author, which means a great deal to an aspiring researcher.

“If I were to sum it up, I would say that university courses taught me science, but Aleksey taught me how to be a scientist,” he said.  “Mainly because of his teaching, I've decided to seek a Ph.D., and work in a national lab or in academia. I'm planning on pursuing a Ph.D. in detector physics.”

Whether or not Bolotnikov’s students go into science, technology, engineering, or mathematics (STEM) fields, most keep in touch with him. Some of his mentoring skills may be the result of his own experiences being mentored beginning in high school.

“If you want to be a scientist, you have to find a mentor,” he said.

Bolotnikov graduated from Moscow Engineering and Physics Institute with an MA in physics in 1983 and received his Ph.D. in physics there in 1991, the same year he moved to the U.S. Before joining Brookhaven in 2003, he worked at Columbia University, the National Aeronautics and Space Administration’s (NASA) Marshall Space Flight Center and Caltech. He has published over 100 scientific and technical papers, and has received numerous honors, including three of R&D Magazine's R&D 100 Awards—in 2006, 2009, and 2014—which are awarded by R&D Magazine to honor the top 100 inventions of the year.