Both the soaring price of gasoline and concerns about global warming make research on improving electrocatalysts for use in fuel cells for electric vehicles especially relevant today.

Radoslav Adzic, a senior chemist in the Chemistry Department, is currently host to two visitors who are performing basic research in this area: Yuji Ando, research scientist from the National Institute of Advanced Industrial Science and Technology, Tsukuba, Japan; and Wei-Fu Chen, a graduate student from National Cheng Kung University, Tainan City, Taiwan. 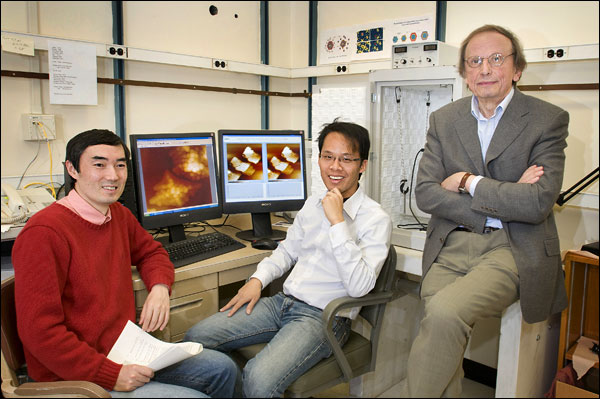 Ando is investigating new syntheses of carbon-supported platinum on ruthenium for use as an electrocatalyst to speed up oxidation of methanol in fuel cells. A methanol fuel cell may be used to power portable electronics, such as computers and cell phones, in the near future. Such technology would provide power continuously with a simple change of a methanol cartridge, and it would be more efficient and lightweight than the batteries now used in such devices. The ultimate goal of Ando's basic research, however, is to find the most efficient and inexpensive electrocatalyst for fuel cells.

While platinum is the most efficient electocatalyst for accelerating oxygen reduction at the fuel cell cathode to be used in electric cars, it is expensive, and still not stable or efficient enough to be used during stop-and-go driving, a major impediment. Chen is investigating the efficiency of a platinum monolayer by placing it on a stable metal or alloy clusters. His goal is to develop improved electrocatalysts that will facilitate the application of platinum in fuel-cell cathode electrocatalysts.

Ando will be working at BNL until December, and Chen will be on site until November, completing his thesis for his Ph.D. Currently working in the Chemistry Department, both researchers also use facilities at the Center for Functional Nanomaterials and the National Synchrotron Light Source for their work.