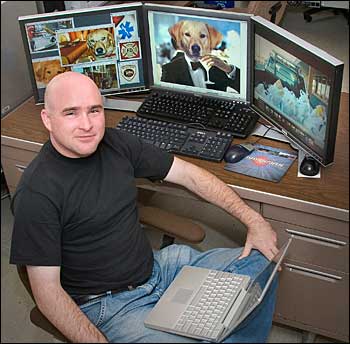 The nameplate next to his office door reads "John Galvin — all-around nice guy" with a picture of Ajax, his yellow lab, in the upper left corner.

This is the best way to describe Galvin, who works in BNL's Web Services Group as an applications engineer. Galvin works with supervisor Gary Schroeder and co-workers Chris Weaver and Pam Mansfield to create and maintain web-based applications for the BNL community.

For example, Galvin designed the content management system that automatically populates most of the content on the Lab's internal and external home pages each day, the same system that dynamically builds all of the "@brookhaven TODAY" story pages, like the one you're reading right now.

According to Galvin, 95 percent of what viewers see when they open the Lab's homepage is dynamically generated. "Dynamically generated" simply means that the web page is really just a template, and the actual page content is stored separately and is retrieved from a database for placement into the template web page when someone loads the page in their web browser.

"Writers in the Lab's Media & Communications Office generate much of the top-level web content (including this story) and then forward the text and associated images to Web Services, where we use our own custom-built systems to store the content in databases," Galvin explains. "We strive to design visually appealing web pages and have designed and built many of the Lab's content management systems that control when, where, and how to display information on the web so that the information may be accessed and communicated most effectively."

Galvin, who first joined Brookhaven in 2000 as a public affairs representative in the Media & Communications Office, points out that, like many who work in web development, he has little formal training in the subject. With unrelated undergraduate and graduate degrees in biology and government & public policy, respectively, Galvin describes his professional development as a self-motivated, learn-as-you-go process. The shelves in his office are lined with computer programming books that he uses to teach himself about the field as needed.

"Until two years ago, I only knew English and a little Spanish," Galvin said, jokingly. "If you need to learn something, a new programming language, for example, you figure it out on your own."

As a volunteer firefighter, Galvin has certainly learned how to solve new problems while working under pressure. He has delivered a baby, fought Long Island's 1995 wildfires, responded to countless car accidents, and has treated and transported many sick and injured people during his 15-year tenure in the Wading River Fire Department.

"It is a great feeling to be able to help people in their time of need," he said, citing this "altruistic benefit" as reason enough to undertake the risks and dedicate his time to serve in this volunteer capacity.

Additionally, he notes a sense of community with his fellow firefighters.

"I consider my fellow volunteers my extended family," Galvin said. "As a result of our collective abilities, members of the fire service are able to accomplish great things when working together to overcome the most adverse conditions and abject situations."

Galvin's participation in the fire service isn't limited to emergency response. As the event organizer, Galvin has taken the lead in running the Wading River Fire Department's annual "Stuff-a-Bus" non-perishable food drives — a charitable endeavor Galvin was inspired to start in Wading River after learning about a similar food drive conducted each year by Connecticut-based radio station KC101.

In December 2006, Galvin was elected to a five-year term as one of Wading River's five publically elected fire commissioners.

Just as he has done at BNL, Galvin is working to maximize the effectiveness of his fire district's operations while ensuring that those operations are conducted as efficiently and cost-effectively as possible. Galvin's priorities include the modernization of many of the district's policies and updating the district's computer infrastructure and applications with the goal of increased data accuracy and decreased paper consumption.

While Galvin's roles at BNL and at the Wading River Fire Department have changed throughout the years, one thing is for sure: he will continue to work behind the scenes to help keep our communities — at work and at home — running smoothly.

Click on an image above to see a larger version.