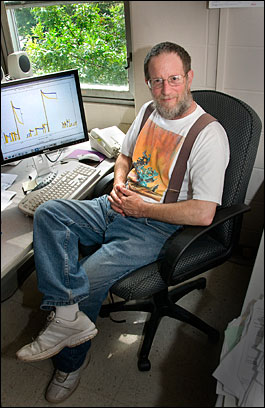 As a technology architect in the Collider-Accelerator Department's Computer Controls Group, Roger A. Katz is the systems administrator for the Collider Controls computer network. But during his leisure time, he can often be found either at a science fiction conference or at a school board meeting. Katz has traveled all over the U.S. to pursue his interest in science fiction. Also, over the past eight years, he has been a school board member in the Babylon Union Free School District.

An avid reader of science fiction since he was in the seventh grade, Katz started to attend annual science fiction conventions sponsored by the World Science Fiction Society in the 1970s, after a colleague at his previous job in Manhattan convinced him that they would be entertaining and enlightening. Katz traveled to many major cities for these conventions, including Atlanta, Boston, Chicago, Denver, Los Angeles and New Orleans.

Science fiction convention programming consists of panel discussions, music and crafts workshops, discussions of a variety of topics, art shows and auctions, game rooms, and masquerades. Usually participants get to meet some of their favorite authors at the conventions.

"I like the imaginative stories of some of the great science fiction writers, such as Isaac Asimov, Arthur C. Clarke and Robert Heinlein, as well as some of the contemporary writers, like David Brin and C. J. Cherryh," Katz said. "My two sons are now college students, but when they were younger, I started to take them to conventions with me - an activity that was fun for all of us."

Katz also has found time to volunteer his services to his local school district. In the 1980s, Katz served on the Babylon school district's technology planning commission. With his background in technology, he and his peers on the commission wanted "to make sure that the technology programs at the school were implemented so that they were technically correct and economical," he said.

His interest in the school technology policies eventually led him to run for a seat on the seven-member school board in the 2,000-student Babylon district, and he was elected three times for three-year terms. He is now serving the first year of his third term.

"Of the many challenges a school board must face, the most daunting is getting the annual school budget passed," Katz said. "It's important for the school board to communicate to the public exactly why the funds in the proposed budget are needed."

Katz added that another difficult decision is allocating resources among remedial programs to be sure "no child is left behind," and advanced placement programs for gifted students.

Especially gratifying to Katz is that the school district's technology program that he helped to implement has been successful in exposing students from kindergarten through high school to computers in the classroom. "Probably about 90 percent of students in our district have computers at home," he said, "but it's important to reach the 10 percent who don't."