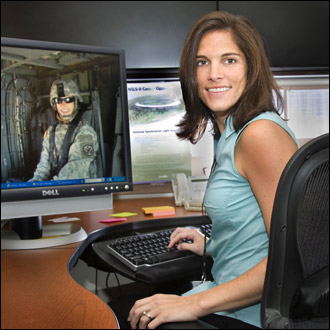 When Joanna Hall returned home last April from a year's tour of duty in Iraq, the first thing on her "to do" list was a tour of Long Island restaurants with her husband Johnny.

"I just wanted to eat a lot of different food," she said. "The army food wasn't bad, but there was a lot of repetition. I made a list of where I wanted to eat and when I got home, we started checking them off."

In addition to the gastronomical tour, Hall spent a few months visiting family, gardening at her home in Coram, and enjoying a trip to Jamaica with her husband before returning to work at the National Synchrotron Light Source II (NSLS-II). Being called to serve her country in Iraq last year was a surprise, since Hall was only a few months away from the expiration of her remaining three-year obligation in the Individual Ready Reserves, after completing her five-year active duty commitment. She had just begun working as Senior Human Resources Representative for the NSLS-II project six months before receiving the letter recalling her to support Operation Iraqi Freedom.

After training at Ft. Jackson, South Carolina, and Ft. Riley, Kansas, for several months, Hall was deployed to the Green Zone in Baghdad as a Personnel Strength Manager, handling in-bound and out-bound members of her 1,500-person unit and trying to soothe herself with the details of ordinary daily life.

"You feel that you're in danger pretty much the whole time," she admitted. "Our biggest concern was indirect fire, but from Easter Sunday 2008 until I left, there was the most fire we'd experienced in a long time as Muqtada al-Sadr's cease fire unraveled."

Hall did lose colleagues during her last month in Baghdad, after a direct hit on the gymnasium. She said that soldiers in Iraq do become accustomed to the violence, and that it can cause a dangerous complacency.

"I became more jumpy when it came close to my time to come home," she said. "Now that I've had a chance to process the experience, I really have an appreciation for the world I was able to grow up in. The hardest part for me was to see the Iraqis, especially the children, and realizing that this is all they know - living in the midst of fear and death."

Hall fell in love with the military lifestyle as a New Jersey teenager, visiting her sister at West Point.

"I liked the lifestyle, the atmosphere of tradition and discipline, the esprit de corps," she said.

Hall spent five years on active duty as a human resources officer after graduating from West Point herself. When her husband, a lawyer she met at Ft. Hood, Texas, took a job in Riverhead on Long Island, she joined him in mid-2004. After working in Nassau County for a time, she eventually found her place at Brookhaven.

Hall is excited to be back heading up the recruiting efforts of the NSLS-II project, which has grown and passed important milestones during the time she was away.

"I'm kind of disappointed that I missed one big ramp-up," she said, "but we still have a lot of recruiting to do, especially in experimental facilities and accelerator systems. It's just as exciting today as when I left."

Hall's co-workers are excited to see her back at work. Said ALD for Light Sources and NSLS-II Project Director Steve Dierker, "We are delighted that Joanna returned from service safely and is now back as the HR Manager for NSLS-II. She is a tremendous member of the team and a real pleasure to work with."

Hall is extremely grateful for all the support and encouragement she received during her deployment, particularly from her NSLS-II and HR co-workers.

"People here kept me updated on what was happening at work, as well as sending cards and packages. The Lab's Adopt-A-Platoon program and the Lab as a whole showed they really cared about me.

"You're always concerned about coming back," she added, "but I was welcomed so warmly by everyone. A lot of people I went to Iraq with didn't have the same experience. It takes a special employer to be so supportive of reservists."