The U.S. Department of Energy's (DOE) Argonne National Laboratory has issued the following press release describing research on the surface structure of a silicon and gold molten alloy. The research was conducted in part at beamline X22B of the National Synchrotron Light Source at DOE's Brookhaven National Laboratory by physicist Benjamin Ocko. Atoms are arranged randomly within the bulk of a liquid metal, but they form into discreet layers at the surface. This phenomenon, known as surface layering, was first discovered for mercury and gallium at Brookhaven in 1995. Continued research on the structure of liquid alloys is important for the metals industry and could lead to emerging nanotechnologies. The gold-silicon interconnect junction, for example, is one of the most common connections used in cell phones, computers and other devices. To interview Ocko, contact Karen McNulty Walsh at (631) 344-8350 or kmcnulty@bnl.gov.

ARGONNE, IL - A substance used in nanotechnology contains unusual structures at its surface, a team of researchers led by Oleg Shpyrko, Distinguished Postdoctoral Fellow at the U.S. Department of Energy's Argonne National Laboratory have learned. 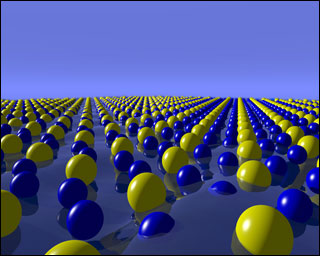 This image represents periodically ordered gold (yellow) and silicon (blue) atoms within the surface-frozen monolayer of liquid gold-silicon eutectic alloy. Research on this surface was conducted at both Brookhaven National Laboratory and Argonne National Laboratory. (Click image for larger version.)

The research results, developed at the Center for Nanoscale Materials at Argonne, are published today [July 7, 2006] in the journal Science.

But that's not the only unusual thing about the gold-silicon eutectic alloy. In a crystalline solid, atoms are arranged in an orderly, periodic fashion, and in a liquid, arrangements of atoms are disordered. It's been known for about ten years that many metallic liquids show two or three distinct atomic layers near the surface, and usually there is no crystalline-like order within these layers. However, Shpyrko and his colleagues found that the gold-silicon eutectic alloy has seven or eight layers near its surface. In trying to understand this unexpected development, they found also that the top-most surface layer includes a crystal-like structure, similar to that normally found only in solid substances.

Understanding characteristics of novel surface phases like this surface-frozen monolayer is important for the growing realm of nanotechnology, in which the basic unit of measurement is a billionth of a meter.

"By the time you reduce the size of an object or device down to one nanometer, practically everything is surfaces and interfaces," Shpyrko said. "We need to understand what the new laws of physics and chemistry that govern the surface structures are."

Gold and silicon are especially important to understand because they are used in computer technology. Gold is an oxide-resistant "noble" metal that is easily shaped into tiny computer chip interconnects, and silicon is the principal component of most semiconductor devices.

"If you think about it, you have gold and silicon in contact with each other in about every electronic device," Shpyrko said.

This work was supported by the Department of Energy, through the Office of Science Office of Basic Energy Sciences, and by the U.S.-Israel Binational Science Foundation, Jerusalem. Measurements at Brookhaven were also supported by the Office of Basic Energy Sciences. The nation's first national laboratory, Argonne National Laboratory conducts basic and applied scientific research across a wide spectrum of disciplines, ranging from high-energy physics to climatology and biotechnology. Since 1990, Argonne has worked with more than 600 companies and numerous federal agencies and other organizations to help advance America's scientific leadership and prepare the nation for the future. Argonne is managed by the University of Chicago for the U.S. Department of Energy's Office of Science.