Co-Discovered the Muon Neutrino at Brookhaven Lab in 1962 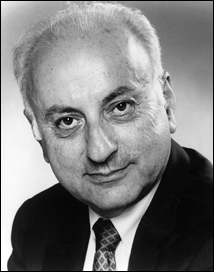 UPTON, NY - Melvin Schwartz, co-winner of the Nobel Prize in Physics, died on August 28, in Twin Falls, Idaho, after a long struggle with Parkinson's disease. In 1962, Schwartz, with Leon Lederman and Jack Steinberger, at the time all of Columbia University, discovered the muon neutrino at the Alternating Gradient Synchrotron (AGS), the then brand-new accelerator at the U.S. Department of Energy's Brookhaven National Laboratory. The three researchers shared the 1988 Nobel Prize for this discovery.

Born in the Bronx on November 2, 1932, Schwartz attended the Bronx High School of Science, and went on to earn both his A.B. and his Ph.D. in physics from Columbia University, in 1953 and 1958, respectively.

First coming to Brookhaven in 1955, Schwartz performed his Ph.D. thesis research through 1956 at the Laboratory's first accelerator, the Cosmotron. While finishing his thesis, he was employed by the Laboratory from 1956-58.

Returning to Columbia University, Schwartz continued to do research at Brookhaven, working at the AGS from 1958-63. After relocating to Stanford University in 1966, he maintained his research ties with Brookhaven.

In 1970, Schwartz founded a major computer-security company, Digital Pathways, Inc., in Mountain View, California. Later, Nicholas Samios, former Brookhaven Lab Director and currently head of the BNL-RIKEN Research Center, encouraged Schwartz to return to physics. He did so in 1991, returning to Brookhaven Lab as Associate Director for High Energy and Nuclear Physics. 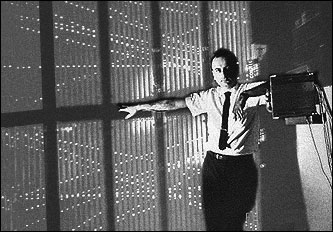 Schwartz with a spark chamber used in the research which ultimately led to his co-winning of the 1988 Nobel Prize in physics.

Nicholas Samios, who was Schwartz's classmate in the 1950s at Columbia University, commented, "Mel was a brilliant, unorthodox physicist who enjoyed all challenges. It was a pleasure to welcome him back to Brookhaven as an Associate Director. He was extremely influential in molding the experimental program at RHIC." RHIC stands for the Relativistic Heavy Ion Collider, Brookhaven's world-class accelerator used to explore matter as it existed at the beginning of the universe.

Derek Lowenstein, Chair of Brookhaven's Collider-Accelerator Department, said, "Mel Schwartz was a great friend, physicist and colleague. Mel was one person whom you could trust to put the accepted scientific truths of the day to the test, before they became gospel. His brilliance as a scientist led him, with Jack Steinberger and Leon Lederman, to discover the muon neutrino at the AGS."

Melvin Schwartz was a member of the National Academy of Sciences and a fellow of the American Physical Society (APS). He received the Hughes Prize from the APS in 1964.