CHICAGO, IL - Platinum might outweigh gold in the jewelry market, but as part of an ongoing effort to produce efficient and affordable fuel cells, scientists at the U.S. Department of Energy's (DOE) Brookhaven National Laboratory are studying how gold atoms might enhance the value of the pricier metal. Specifically, they're looking for ways to use gold to prevent the destruction of platinum in the chemical reactions that take place in fuel cells. Brookhaven chemist Radoslav Adzic will describe this research during the 233rd National Meeting of the American Chemical Society at 2 p.m. Central Time (3 p.m. Eastern Time) on Tuesday, March 27, 2007, in room S405A, Level 4, at McCormick Place South, Chicago, Illinois. 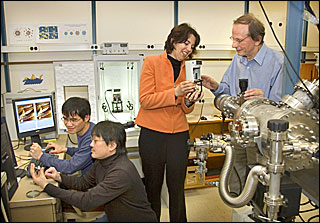 Platinum is the most efficient electrocatalyst for accelerating chemical reactions in fuel cells. However, in reactions during the stop-and-go driving of a fuel-cell-powered electric car, the platinum dissolves. In accelerated tests, as much as 45 percent of the catalyst can be lost during five days. "Platinum is by far the best single component catalyst for the oxygen reduction reaction, and we have to find a way to protect it," Adzic said. Under lab conditions that imitate the environment of a fuel cell, Adzic and a team of Brookhaven researchers, including Junliang Zhang, Kotaro Sasaki, and Eli Sutter, added gold clusters to a platinum electrocatalyst, which kept it intact during an accelerated stability test that simulates stop-and-go driving in an electric car.

The details: A fuel cell converts hydrogen and oxygen into water and, as part of the process, produces electricity. Hydrogen is oxidized at the device's anode (the terminal where current flows in) when electrons are released and hydrogen ions are formed; the released electrons supply current for an electric motor. These electrons flow to the cathode (the terminal where current flows out) to reduce oxygen, and in a reaction with hydrogen ions, water, the only byproduct of a fuel cell reaction, is produced. Platinum electrocatalysts are used to speed up the oxidation and reduction reactions involved in this process, but as a result, they, too, are oxidized (lose electrons) and dissolve.

In the unique method used at Brookhaven, researchers place gold on carbon-supported platinum nanoparticles by displacing a single layer of copper and subject it to several sweeps of voltage. The copper is needed to reduce the charged gold particles to neutral atoms; it then conveniently forms a monolayer of platinum by an adsorption process, the binding of molecules or particles to a surface. Using x-rays as probes at Brookhaven's National Synchrotron Light Source, a scanning transmission microscope at Brookhaven's Center for Functional Nanomaterials, and electrochemical techniques in the laboratory, the scientists can show that less platinum is oxidized with this method. As predicted, during laboratory testing, the platinum electrocatalyst remains stable when under conditions mimicking stop-and-go driving conditions. Next, researchers will test the catalyst in real fuel cells at the DOE's Los Alamos National Laboratory in New Mexico.

"The very promising properties of fuel cells have been known for many decades," Adzic said. "But it's only now that we can look at the activities and qualities of the catalysts and find something stable enough to be used in cars or residential applications."

This research is funded through the U.S. Department of Energy's Hydrogen Program, which implements the President's Hydrogen Fuel Initiative, a five-year program that began in 2003 to sponsor research, development, and demonstration of hydrogen and fuel cell technologies. Specifically, the funding derived from DOE's Office of Basic Energy Sciences and its Office of Energy Efficiency and Renewable Energy.