UPTON, NY - Using what is thought to be the world's smallest pipette, two researchers at the U.S. Department of Energy's Brookhaven National Laboratory have shown that tiny droplets of liquid metal freeze much differently than their larger counterparts. This study, focused on droplets just a billionth of a trillionth of a liter in size, is published in the April 15, 2007, online edition of Nature Materials.

"Our findings could advance the understanding of the freezing process, or 'crystallization,' in many areas of nature and technology," said Eli Sutter, a scientist at Brookhaven's Center for Functional Nanomaterials (CFN) and the lead author of the study. 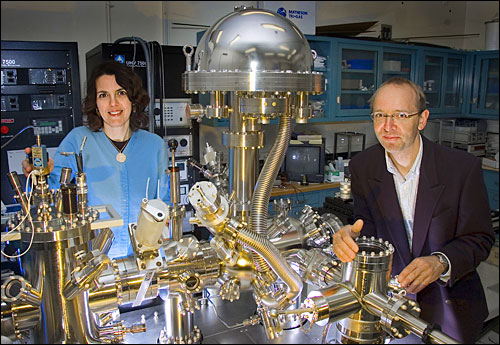 Melting and crystallization are so-called phase transformations - fundamental processes by which most substances change between a disordered liquid state (such as liquid water) and an ordered solid state (e.g., ice). When a liquid droplet is cooled, the motion of its atoms gradually slows until they come to a stop, resulting in a solid. For large droplets, this crystallization usually starts at a small impurity (e.g., a speck of dirt), from which it rapidly spreads over the entire droplet. However, very pure substances lack such crystallization centers and have difficulty starting the phase transformation.

"The accepted theory of crystallization, developed in the first half of the previous century, predicts that without impurities, a small solid core generated at random in the interior of the droplet initiates the phase transformation," Sutter said. "Our experiments on very small droplets challenge this theory." 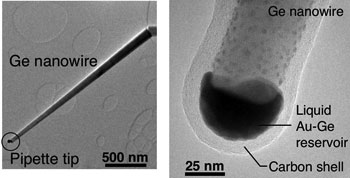 A zeptoliter pipette used by the research team as viewed in an electron microscope. The pipettes were made from germanium nanowires with a reservoir of gold-germanium alloy at the tip. Next, the researchers heated and encapsulated both the nanowire and reservoir in a few thin layers of carbon. A hole was then punctured in the reservoir end of the carbon shell, thus defining a nozzle through which the liquid alloy escapes to form a droplet. (Click image to download hi-res version.)

To study the freezing process at the ultra-small scale, Eli Sutter and fellow researcher Peter Sutter use what is thought to be the world's smallest pipette, a device capable of producing liquid droplets of a gold and germanium alloy with a volume of only a few zeptoliters (a billionth of a trillionth of a liter). Operated inside an electron microscope, which creates an image of the sample by bombarding it with a beam of electrons, this zeptoliter pipette suspends the tiny droplets so their phase transformations can be studied with high magnification.

To achieve a liquid state, the metallic alloy must be kept at a temperature above 350 degrees Celsius. When the temperature is lowered to about 305 degrees Celsius, the researchers observe a striking phenomenon: The liquid droplets develop surface "facets," which are straight, planar sections on the otherwise spherical-shaped structures. The facets continually form and decay in an "ethereal dance" of the droplet shape. This "dance" can last for hours, but quickly stops if the temperature is lowered any further. At this point, the droplet solidifies into a structure that is determined by the ending positions of the dancing surface facets.

"In our experiments, solid-like properties first develop in a thin skin at the surface, while the interior remains liquid," Eli Sutter said.

This finding counters the traditional idea that all crystallization originates in the interior of a liquid droplet, instead showing that the process may differ based on the size of the sample. This work lays the foundation for a better understanding of freezing processes in the environment as well as in nanotechnology. For example, the balance of solid and liquid water in upper-atmosphere clouds - an important factor in climate models - greatly depends on the exact way water droplets freeze. Such parameters might be predicted more accurately with a better picture of the freezing mechanism.