BOSTON, MA - Using DNA, the molecule that carries life's genetic instructions, researchers at the U.S. Department of Energy's Brookhaven National Laboratory are studying how to control both the speed of nanoparticle assembly and the structure of its resulting nanoclusters. Learning how to control and tailor the assembly of nanoparticles, which have dimensions on the order of billionths of a meter, could potentially lead to applications ranging from more efficient energy generation and data storage to cell-targeted systems for drug delivery. Mathew Maye, a chemist in Brookhaven's newly opened Center for Functional Nanomaterials, will present the latest findings in this field at the 234th National Meeting of the American Chemical Society. 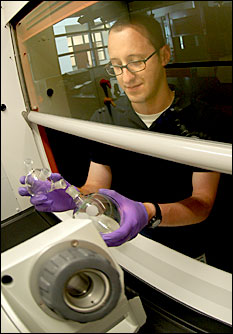 "We can synthesize nanoparticles with very well controlled optical, catalytic, and magnetic properties," Maye said. "They are usually free-flowing in solution, but for use in a functional device, they have to be organized in three dimensions, or on surfaces, in a well-controlled manner. That's where self assembly comes into play. We want the particles to do the work themselves."

Using optical measurements, transmission electron microscopy, and x-ray scattering at Brookhaven's National Synchrotron Light Source, Maye and his colleagues have shown how to control the self assembly of gold nanoparticles with the assistance of various types of DNA. Their technique takes advantage of this molecule's natural tendency to pair up components called bases, known by the code letters A, T, G and C. The synthetic DNA used in the laboratory is capped onto individual gold nanoparticles and customized to recognize and bind to complementary DNA located on other particles. This process forms clusters, or aggregates, which contain multiple particles.

The research group previously used rigid, double-stranded DNA to speed up and slow down the speed of nanoparticle assembly. Most recently, they also perfected a method for regulating the size of the resulting particle clusters by incorporating multiple types of DNA strands.

At 9 a.m. Eastern Time on Wednesday, August 22, 2007, in room 212 of the Boston Convention and Exhibition Center, Maye will discuss how these two methods provide researchers with precise control of nanoparticle assembly.

"Self-assembly is really a frontier of nanoscience," Maye said. "Learning how to take a solution of nanomaterials and end up with a functional device is going to be a great achievement."

This research was funded by the Office of Basic Energy Sciences within the U.S. Department of Energy's Office of Science.

Note to local editors: Mathew Maye is a resident of Middle Island, NY.