UPTON, NY — The newest and largest particle accelerator at the U.S. Department of Energy's Brookhaven National Laboratory is taking a break from recreating the conditions of the early universe to investigate another fundamental question that has puzzled physicists: Where do protons get their spin, a property of elementary particles as basic as mass and electrical charge? To begin to answer the question, the Relativistic Heavy Ion Collider (RHIC) has accelerated beams of polarized protons to the highest energy ever, and will begin colliding the beams this week.

"These will be the first-ever experiments where the protons in two colliding beams are all spinning in a controlled direction," said Thomas Roser, head of the Brookhaven accelerator group running the project.

The achievement was celebrated by scientists from Brookhaven, Japan’s RIKEN laboratory — which initiated this physics program with Brookhaven and created the RIKEN-BNL Research Center (RBRC) — and collaborators from many other national and international laboratories and universities who have worked to develop the RHIC spin program. “It is a truly international team that has led the program to this success,” said Hideto En’yo, the associate director of RBRC.

“Through this collaboration, we hope to gain a better understanding of the structure of matter and the strong force that holds the components of protons together,” said Naohito Saito, a RIKEN physicist now at RBRC. The physicists are also excited to discover what surprises are in store. 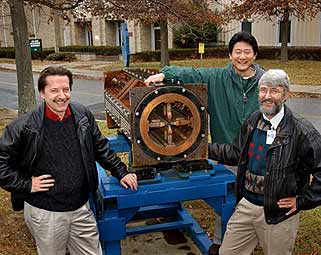 Thomas Roser, Naohito Saito, and Gerry Bunce with a quadrupole magnet once used in the Alternating Gradient Synchrotron (AGS) . The AGS feeds beams of polarized protons into RHIC.

Scientists know that protons are made of smaller particles called quarks, which are held together by emitting and absorbing particles called gluons, the carriers of the strong force. The effect of the gluons is very much like connecting the quarks with strong springs. The physicists also know that all of these particles — the protons, quarks, and gluons — have an intrinsic property known as spin, somewhat analogous to Earth spinning on its axis.

The physicists long thought that the spin of a proton was simply the sum of the spins of its three component quarks. But experiments have shown that the quarks account for only about 20 percent of the proton’s spin. That has left the scientists with a puzzle: What accounts for the missing 80 percent?

The most likely explanation, the physicists say, is that the gluons must somehow also contribute to the proton’s spin. “Unlike any previous experiments, collisions of spin-aligned [polarized] protons at RHIC will allow us to tease apart the individual contributions of both the quarks and the gluons,” said Gerry Bunce, the Brookhaven physicist leading the spin program for the Lab. 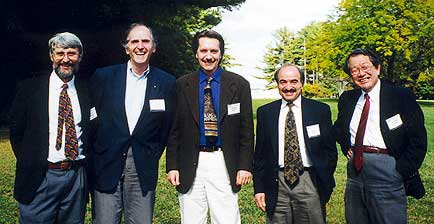 This is possible because beams of polarized protons allow scientists to use the quarks in one beam to probe the properties of the gluons in the other beam. In other words, the products that come out of a very high-energy collision between a quark in one beam and a gluon in the other beam — subatomic particles and energy — can reveal the properties of the colliding pair, including the gluon’s spin. RHIC’s two largest detectors, PHENIX and STAR, will analyze the collision products to produce this information in complementary but overlapping ways. Another detector, for the proton-proton elastic scattering experiment, will explore the force between the protons as they collide, and analyze how this force is affected by spin. 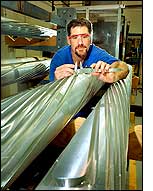 Keeping the beams polarized is no easy task. After initial polarization, the beam moves through five accelerators, all composed of magnets that can interfere with polarization. Spinning protons are like tiny magnets, which can be acted on by other magnets.

To overcome this problem, the Brookhaven/RIKEN team — in collaboration with the Budker Institute in Russia and funding from RIKEN — designed and built specialized sets of magnets called Siberian snakes (left and below). The magnets have a corkscrewlike design, which causes the direction of the magnetic field to spiral along the direction of the beam. There are two snakes in each of RHIC’s two 2.4-mile-circumference rings, located at opposite sides of each ring. As the beam moves through the snakes, the magnetic field flips the polarization, or direction of spin, and simultaneously averages out many smaller effects of RHIC’s accelerator magnets. This allows the scientists to maintain stable polarization of the beam. 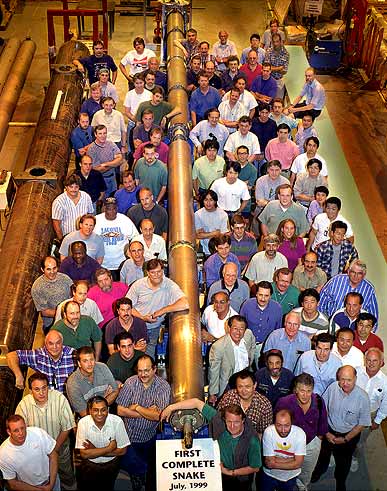 RIKEN also funded and Brookhaven built spin rotators, devices that allow scientists to select the spin direction at the collision points, as well as polarimeters, which measure the exact degree of polarization. These factors must be precisely known to analyze the spin data. Essential components of the PHENIX detector were also funded by RIKEN and by RBRC.

The spin research program also receives funding from the U.S. Department of Energy and the National Science Foundation.

“Thanks to this collaboration between RIKEN and Brookhaven, experimental physicists and theorists from around the world are looking forward to exciting results from this brand new program,” said Thomas Kirk, Associate Laboratory Director for High-Energy and Nuclear Physics at Brookhaven.