End view of a gold-ion collision in the STAR detector.

STONY BROOK, NY - Today, at the Quark Matter 2001 Conference at Stony Brook University, nearly 700 physicists from around the world gathered to hear breaking news about the exploration of a new frontier recently opened at the U.S. Department of Energy's Brookhaven National Laboratory. Among the findings: Collisions between gold ions in the Lab's newly operational Relativistic Heavy Ion Collider (RHIC) have created nuclear matter resulting from the highest energy density ever achieved in a scientific experiment.

Much like the explorers of centuries past, keenly searching for signs of a new land on an unfamiliar horizon, the experimenters at RHIC are straining to see evidence of both expected scientific landmarks and new phenomena, predicted but not yet observed. "The clear observation of so many species of well-known particles, ranging from common to quite rare ones, indicates that the RHIC detectors are working spectacularly and that the real exploration can begin," says William Zajc, scientific spokesperson for RHIC's PHENIX detector, and one of the nearly 1,000 physicists working on RHIC. 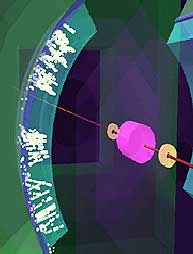 In particular, the scientists are searching for evidence of a transition to a new phase of nuclear matter called the quark-gluon plasma (QGP), which scientists think last existed at the beginning of the universe and evolved into the matter of today's world. That transition is roughly analogous to boiling water to create steam. One of the things the scientists hope to find is the "boiling point," the energy density at which the transition takes place.

To do this, the RHIC scientists have built a machine capable of accelerating and colliding gold ions (atoms stripped of their electrons) at nearly the speed of light. So far, RHIC has produced more than 200 million gold ion collisions.

RHIC's four experimental teams - one for each of the collider's detectors - have just begun to focus their "microscopes" on these first collisions. "Already, the collision environment appears favorable for producing matter at high temperatures and densities, which bodes well for the future," says John Harris, spokesperson for the STAR detector collaboration.

Among the findings so far:

Event display of particles produced in gold ion-collision as seen by the PHOBOS detector.

The relative abundance of antimatter to matter - in particular, antimatter containing one or more strange antiquarks - is increased significantly compared to similar experiments at CERN. This indicates that conditions have been produced that are closer to those believed to have existed at the beginning of the universe.

How much these early results will contribute to scientists' understanding of a possible transition to quark-gluon plasma is not yet clear. Some of the results are consistent with expectations based on previous work. Other results, however, are strikingly different from what was seen in previous experiments.

"The results from RHIC are challenging us to come to a new understanding of the unique environment that we are creating," says Gunther Roland, who presented the PHOBOS detector data. Only by looking at all the data from RHIC's four experiments will the scientists be able to piece together the complete picture.

A collision event recorded by the BRAHMS detector.

"These are still the early days," says Flemming Videbaek, spokesperson for the BRAHMS detector team. "The first year's data are presenting us with a partial map of the heavy-ion collisions. It's as if we are coming to a new land and beginning to see mountains, rivers, and other geographic features." The next step is to understand how these features are related to each other and exactly what they reveal about this new frontier.

The scientists will get that chance as RHIC resumes operations this spring at even higher energy. During last year's experimental run, RHIC was operated at up to two-thirds of its design energy. Data at different collision energies will give a more complete picture of what happens to matter as it is heated and compressed, and will help the RHIC scientists understand and study the transition to quark-gluon plasma.

"We are delighted that RHIC is producing such interesting and important physics results so soon after turning on," said Peter Rosen, director of the Department of Energy's Office of High Energy and Nuclear Physics. "Brookhaven National Laboratory is to be congratulated for an outstanding job of building and operating RHIC, a unique world-class scientific facility. We at DOE look forward to future results with great anticipation and excitement."