UPTON, NY — Distinguished Senior Scientist Nicholas Samios, former Director of the U.S. Department of Energy’s Brookhaven National Laboratory and Director of the RIKEN BNL Research Center, will be inducted into the Long Island Technology Hall of Fame. One of five innovators to be honored at a ceremony and reception held at the Garden City Hotel on March 10, Samios will be recognized for his numerous distinguished scientific contributions, including his leadership in the successful construction of Brookhaven’s premiere accelerator, the Relativistic Heavy Ion Collider (RHIC), and the experiments at RHIC that led to the discovery of quark-gluon plasma, a type of matter that is believed to have existed just microseconds after the Big Bang.

Also honored at the event will be Brookhaven Lab scientists Paul Kalb and John Heiser, along with former Brookhaven Lab employee Mark Fuhrmann, for their mercury extraction technology, called “In Situ Mercury Stabilization,” developed to passively remove toxic mercury from soil, sediment, sludge, and other industrial waste. Brookhaven Science Associates, the company that manages Brookhaven Lab for the Department of Energy, holds the patent for this technology.

The Long Island Technology Hall of Fame recognizes, honors, and preserves the contributions, accomplishments, and dedication of historical figures or current leaders in science or technology who have an impact on society. The organization raises funds for scholarships, outreach, and research initiatives that will ensure Long Island’s economic and intellectual leadership. 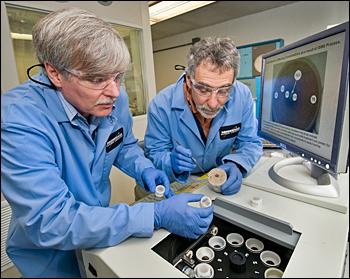 Brookhaven Labs John Heiser (left) and Paul Kalb, who hold the in situ mercury remediation patent with Mark Fuhrmann, formerly of Brookhaven, check the functioning of the new technology in the laboratory.

“My Long Island roots go back a long way, from the time I worked at Brookhaven Lab as a summer student in 1952,“ Samios said. “I’m honored that the Long Island Hall of Fame is recognizing my contributions, and I’m proud to have spent a 50-plus year career at Brookhaven Lab – a world-leader in science.”

Nicholas Samios earned his B.A. and Ph.D. degrees in physics from Columbia University in 1953 and 1957, respectively. He joined Brookhaven as an assistant physicist in 1959, and during his tenure at the Laboratory, Samios made many significant discoveries that helped define and lead to worldwide acceptance of the Standard Model, a physics theory that explains particle interactions. Samios rose through the ranks to become Director of Brookhaven Lab in 1982, a position he held until 1997. During this time, Samios was instrumental in developing the plan for RHIC, a world-class accelerator that began operating in 2000.

A Distinguished Senior Scientist since 1997, Samios became Deputy Director of the RIKEN/BNL Research Center (RBRC) in 1998, and Director of the center in 2003. Funded primarily by the Japanese RIKEN Laboratory, RBRC explores both the theoretical and experimental physics potential of RHIC. Samios also was an adjunct professor in Columbia’s Physics Department from 1970 to 1995.

Samios’ numerous honors include the 1980 E.O. Lawrence Memorial Award; the 1980 New York Academy of Sciences Award in Physical & Mathematical Sciences; the 1993 W.K.H. Panofsky Prize; the 2001 Bruno Pontecorvo Prize of the Joint Institute for Nuclear Research in Dubna, Russia; and the World Federation of Scientists’ 2009 Gian Carlo Wick Gold Medal Award. He was elected to the National Academy of Sciences in 1982 and is a Fellow of the American Physical Society, the American Academy of Arts and Sciences, the American Association for the Advancement of Science, and the Akademia Athenon.

The Brookhaven researchers’ patent award was selected from all patents given to Long Island residents during 2009 in the area of “Environment & Energy.” Kalb, the principal investigator who developed the winning technology with Heiser and Fuhrmann, said, “We are very pleased to be selected for this honor. Our invention can cost-effectively treat and remove mercury from contaminated soil and other wastes without requiring total excavation and disposal.”