UPTON, NY — A new source of ions will soon be the starting point for the beams entering two major research facilities at the U.S. Department of Energy’s (DOE) Brookhaven National Laboratory — the Relativistic Heavy Ion Collider (RHIC), where physicists are recreating conditions of the early universe to learn more about the forces that hold matter together, and the NASA Space Radiation Laboratory (NSRL), where scientists study the effects of space radiation to help find ways to protect astronauts. The new facility, the Electron Beam Ion Source (EBIS), will produce and accelerate beams with greater versatility than the current system, allowing studies with new kinds of ions previously unavailable to the researchers. EBIS recently received formal approval to start operations from DOE.

“This new system uses EBIS and two small accelerators as a replacement for the Tandem Van de Graaff accelerators, which have been running successfully for 40 years, but with certain limitations when it comes to producing ion beams for RHIC and NSRL,” said Jim Alessi, leader of the group that designs and operates “pre-injector” accelerator systems at Brookhaven. For example, because the Tandems must start with negatively charged ions — atoms with one extra electron — they can only produce beams from about half the elements in the periodic table. EBIS can start with positive ions or even neutral atoms, allowing the creation of ion beams from almost any element. 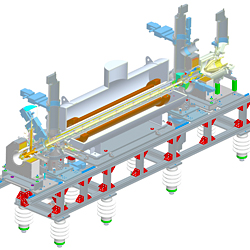 A cut-away of the EBIS pre-injector. The central "trap" region, where electrons are stripped off atoms to create positively charged ions, is 1.5 meters long.

For the RHIC program, physicists are most interested in creating and colliding beams of uranium ions because of their football shape and large number of protons and neutrons. Head-on collisions of two tiny uranium ions positioned like colliding spiraling footballs would produce a speck of matter with even greater energy density than the spherical gold ion collisions currently creating a hot soup of quarks and gluons at RHIC. This higher energy density will allow scientists to study the evolution of this early-universe substance over a wider range of conditions than has been previously accessible at RHIC.

Head-on collisions with the uranium ions oriented vertically, like footballs prepared for a kick-off, are also of great interest: They will permit scientists at RHIC to separate the effects of extremely hot matter formed when two spherical gold ions overlap only partially on impact (forming a similar football-shaped interaction region) from effects of the ultra-strong magnetic fields produced in such non-head-on collisions.

At NSRL, scientists are interested in testing the effects of ions of noble gases like helium, neon, and argon, because these are common components of galactic cosmic rays and could pose a significant risk to astronauts on long-term space missions. 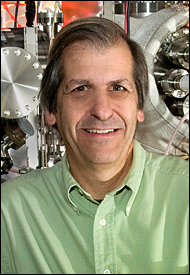 Another major advantage is that EBIS can feed beams of different ions to each facility at practically the same time. Said Alessi, “We can provide one type of beam to RHIC and, one second later, we can provide a different type of beam to the NASA program. We can switch back and forth between different types of beams quickly, so the two programs can schedule their experiments and run simultaneously, independently of one another, rather than having to use the same kind of ions at the same time or plan their runs sequentially.”

EBIS works by trapping atoms or ions in an electrically charged chamber inside a 1.5-meter-long cylindrical superconducting magnet. The voltage holds the charged ions in the chamber while an electron beam generated at one end passes through, systematically stripping electrons off the trapped atoms. For helium gas, there are only two electrons to be stripped off to create a beam of helium ions, where each has a 2+ charge. For gold — the heaviest ion collided at RHIC to date — the ions start off with one electron already stripped off, but they are held in the trap until 32 electrons have been removed, resulting in a beam where each ion has a net charge of 32+. “The longer you hold the beam in the trap, the more electrons you can strip off,” Alessi said.

As with the gold ion collisions at RHIC, which have used less gold than is found in a single wedding ring over RHIC’s ten years of operations, the amount of uranium used will be extremely small and not pose any radiation risk to either Brookhaven Lab staff or the public. “A handful of soil typically has more naturally occurring uranium than we’ll be using in a year at RHIC,” Alessi said. Also, EBIS will use the dominant naturally occurring form of uranium, U238, which cannot “split” and sustain a nuclear chain reaction like U235.

When the desired number of electrons is removed (that is, when the desired charge state has been reached), the voltage is turned off and the beam is released from the trap. The ion beams then move from EBIS through two small linear accelerators that bring the beam up to the energy needed for injection into the next accelerator — the Booster and then NSRL or the Alternating Gradient Synchrotron and then RHIC.

The high charge achieved in EBIS greatly simplifies the entire acceleration process. “If you have more charge on the ion, then it gets higher energy for the same voltage in the accelerator. So by producing an ion with a charge of 32+ in the case of gold, the energy it gets across a fixed voltage is larger than it would be with a lower charge. Since you need lower voltage to accelerate the ions, then you can do this over a much shorter distance — 10 feet vs. about 80 feet in the Tandems — resulting in a more compact accelerator.”

That compactness along with the modern accelerator technologies used in EBIS and the two linear accelerators will make the new pre-injector system easier to operate and maintain, leading to more cost-effective operations. “Once we finish commissioning and debugging the system, EBIS will be extremely reliable,” Alessi said.

EBIS will begin providing helium ions to researchers at NSRL this fall. The first uranium collisions at RHIC may take place as early as late winter or spring 2011. Meanwhile, and even after EBIS starts operating, the Tandems will continue to run to provide beams for a community of outside scientists who use that facility for dedicated research on electronic components for industrial and space applications.

The EBIS pre-injector system was jointly funded by NASA and the DOE Office of Science.