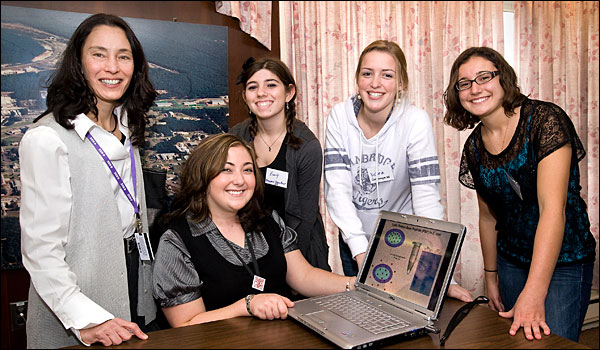 The students learned about BWIS, the Women in Science and Engineering Program at Stony Brook University, and the forefront science at Brookhaven Lab. Four female scientists gave presentations on their research, spiked with career advice and personal perspectives on women in science, and responded to the students’ numerous questions.

Physicist Michiko Minty explained how she measures and controls particle beams in Brookhaven Lab’s accelerators, a crucial task in enabling the success of physics experiments exploring matter as it existed at the birth of the universe. Cecilia Sanchez-Hanke said she wanted to be a dentist, but later changed her career goals, eventually becoming a physicist at Brookhaven’s National Synchrotron Light Source (NSLS), where she uses powerful x-rays to study the basics of magnetism. Elizabeth Scotto-Lavino, a postdoctoral research associate in Brookhaven’s Biology Department, explained her research on a protein called penton base peptide, a component of the adenovirus, which causes the common cold and other ailments. During lunch, Brookhaven Lab biophysicist Lisa Miller described her basic research on Alzheimer’s disease, which she performs at the NSLS.

The students toured the NSLS, where researchers use x-rays, ultraviolet light and infrared light to probe all kinds of materials, from computer chips to viruses, and the control room of the Relativistic Heavy Ion Collider, a world-class accelerator where physicists study the type of matter that existed at the beginning of the universe. They also enjoyed hands-on exhibits at the Science Learning Center, where more than 20,000 elementary school students visit each year to learn about basic scientific principles.