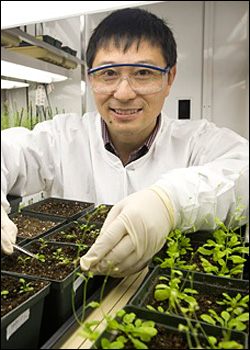 UPTON, NY — One big challenge in converting plants to biofuels is that the very same molecules that keep plants standing up make it hard to break them down. Now scientists at the U.S. Department of Energy’s (DOE) Brookhaven National Laboratory are unraveling details of how plant cells’ structural supports — their cell walls — are made, with the hope of finding ways to change their composition for more efficient biofuel production.

In a paper published the week of December 13, 2010, in the Proceedings of the National Academy of Sciences, the researchers describe details of how precursors to lignin, one important cell-wall component, are transported across cellular membranes prior to linking up. The key finding, that the process requires a class of energy-dependent transporter molecules, may provide a “chink in the armor” that opens a way to alter plants’ lignin content.

“Being able to manipulate lignin biosynthesis would have a great influence on our ability to produce renewable biofuels from plant cellulosic feedstocks, and could also have a large effect on many other agricultural and industrial processes, such as the production of paper and more digestible foods for grazing animals,” said lead author Chang-Jun Liu, a Brookhaven biologist.

Prior to cell-wall construction, lignin precursors known as monolignols are made in the cell’s interior cytoplasm. Some precursors may be sequestered in internal vacuoles for storage, while some move out of the cell to link up and form the lignin component of the cell wall — a protective and supportive barrier around the cell. In both cases, the precursors move across a membrane, either out of the cell or into the vacuole. But no one was certain how the process occurred — whether by simple diffusion or via some active transport mechanism.

The Brookhaven team unraveled the mystery by isolating portions of cellular and vacuolar membrane from Arabidopsis and poplar plants, making them into closed vesicles that resemble bubbles, and mixing in pure monolignols and ones that have been chemically modified to form monolignol glucosides, which are commonly observed in some plants. They then monitored which type and how much of each precursor moved across the two kinds of membranes and into the vesicles under a range of conditions, including in the presence of inhibitors for different kinds of transport molecules. 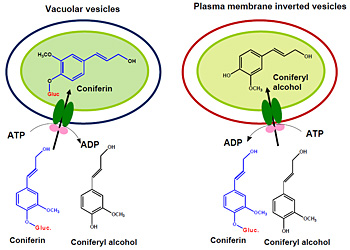 ATP-dependent, selective uptake of monolignols or their glucosides by vacuolar vesicles and inverted plasma membrane vesicles.

The range of assays revealed that pure monolignols move across the cellular membrane while monolignol glucosides move preferentially into vacuoles. But most importantly, very little of either precursor would move across either type of membrane without the addition of ATP, the molecular “currency” for energy in cells.

“ATP is the energy molecule that is well known for providing the driving force for a group of transporters called ATP-binding cassette (ABC) transporters on cell membranes,” Liu said.

To prove the point, adding an agent that specifically inhibits ABC transporters completely blocked uptake of lignin precursors by both types of membrane vesicles.

With these experiments and additional evidence, Liu and his colleagues demonstrated that ABC-like transporters on cell membranes are responsible for the transport of lignin precursors.

Now that the scientists have identified a class of transporters likely involved in sequestering and transporting lignin’s building blocks, they’ll pursue detailed studies to identify exactly which members of the class are involved.

“If we can identify those particular transporters we might be able to control their expression to reduce the precursor deposited into the cell wall, and thus lower the cell-wall content of lignin —or, selectively control the particular type of precursor deposited to change lignin composition and produce more easily cleavable biopolymers,” Liu said.

Brookhaven postdoctoral research associate Yu-Chen Miao was a coauthor on the PNAS paper.