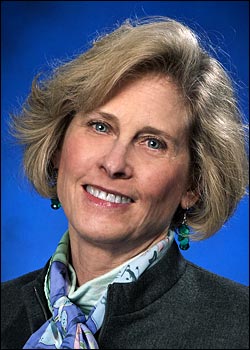 UPTON, NY — Carol Kessler, former director of the Center for Global Security at the U.S. Department of Energy’s (DOE) Pacific Northwest National Laboratory (PNNL), has been named chair of the Nonproliferation and National Security Department at DOE’s Brookhaven National Laboratory, effective January 31. She succeeds Joseph Indusi, who had been the department chair for the last 10 years. Indusi will now serve as program manager for Brookhaven Lab’s work with the National Nuclear Security Administration and the Laboratory’s customers in the intelligence community.

With 2011 planned expenditures of approximately $31 million, the Nonproliferation and National Security Department has 67 full-time employees who conduct research for DOE and other government agencies to safeguard nuclear materials and prevent the proliferation of nuclear, chemical and biological weapons in the U.S. and throughout the world. These efforts extend to arms control verification and technical support. In addition, the department develops technology for counter-terrorism; critical infrastructure protection, especially advanced detectors and radiological protection; and provides training for others in these areas.

“I am very pleased to be chosen for this position,” said Kessler. “My background and experience in the areas of national security, nuclear energy and nonproliferation have prepared me for the important challenges that lie ahead for the department.”

Kessler’s plans for the department focus on building up its capabilities, especially in international safeguards, including hiring new staff and offering on-the-job training so that new personnel can develop the expertise needed to support the Laboratory’s clients. She will also concentrate on growing Brookhaven Lab’s work in homeland security regionally and nationally.

Kessler earned a bachelor’s degree in bio-geology from Brown University in 1975, and she began her career as an oceanographer working at the U.S. Geological Survey and then at the Marine Biological Laboratory in Woods Hole, Massachusetts. Inspired by a mentor, she left Woods Hole to earn a master’s degree in Technology and Policy from the Massachusetts Institute of Technology. While there, she became interested in nuclear nonproliferation and wrote her thesis on international safeguards. After graduating, she became special assistant to the senior specialist for nonproliferation in the Congressional Research Service, U.S. Library of Congress.

From 1984 to 1988, Kessler was an export control and international safeguards analyst for the Office of International Programs, U.S. Nuclear Regulatory Commission. In 1988, she began her career at the State Department, serving as a foreign affairs officer for the Office of Nuclear Technology and Safeguards. She worked her way up through the ranks at the State Department to become the senior coordinator for nuclear safety in the Bureau of Nonproliferation Affairs, a position she held from 1995 to 2000.

From 2000 to 2001, Kessler took a one-year, mid-career management training course in the formulation of U.S. national security strategy at the National War College, in Washington, D.C., earning a second master’s degree in national security policy. After attending the National War College, she became the Deputy Director General for the Nuclear Energy Agency at the Organization for Economic Cooperation and Development, in Paris, France. In 2003, Kessler joined PNNL, where she directed its Center for Global Security. As director, she guided PNNL activities in Asian energy security and nonproliferation policy. Of particular note was her work to build the center’s budding nonproliferation education program into a renowned program of study in international security and nonproliferation. Called the Institute for Global and Regional Security Studies, the program is a collaboration between PNNL’s center and the Jackson School of International Studies at the University of Washington.

Kessler noted the highlight of her career was being part of the Group of Seven (G-7) international nuclear safety working group. This group was assigned by their governments to help the former Soviet Union and Eastern European countries to improve safety or close their Soviet-era reactors. The high point of the group’s activity was Ukraine’s decision to close the remaining Chernobyl reactor in the year 2000 because the G-7 had gathered together $2 billion in international resources to help Ukraine with Chernobyl-related problems and its overall energy needs.