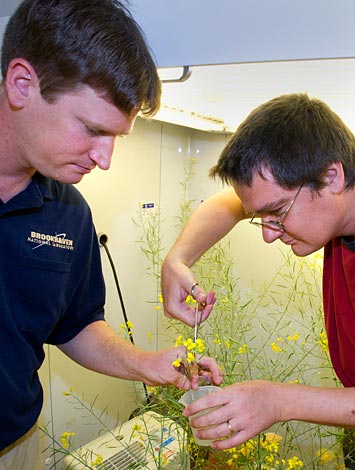 UPTON, NY — Using a computational model they designed to incorporate detailed information about plants’ interconnected metabolic processes, scientists at the U.S. Department of Energy’s Brookhaven National Laboratory have identified key pathways that appear to “favor” the production of either oils or proteins. The research, now published online in Plant Physiology, may point the way to new strategies to tip the balance and increase plant oil production.

The study focused on the metabolism of rapeseed, a crop grown primarily in temperate climates for the oil that accumulates in its seeds. Such plant oils are used worldwide for food, feed, and increasingly as a feedstock for the chemical industry and to produce biodiesel fuel.

“Increasing seed oil content is a major goal for the improvement of oil crops such as rapeseed,” said Brookhaven biologist Jörg Schwender.

As a step toward that goal, Schwender and Brookhaven postdoctoral research associate Jordan Hay recently developed a detailed computational model incorporating 572 biochemical reactions that play a role in rapeseeds’ central metabolism and/or seed oil production, as well as information on how those reactions are grouped together, are organized in subcellular compartments, and how they interact. They’ve now used the model to identify which metabolic pathways are likely to increase in activity—and which have to decrease—to convert a “low-oil” seed into a “high-oil” seed.

Such a switch would likely be a tradeoff between oil and protein production, Schwender explained, because with limited carbon and energy resources, “the plant would ‘pay’ for the increased cost of making more oil by reducing its investment into seed protein.”

So far, efforts based on conventional plant breeding and genetics have had very limited success in changing the typical tradeoff of storage compounds in seeds.

“Behind the production of oil and protein in seeds is a complex network of hundreds of biochemical reactions, and it is hard to determine how this network is controlled and how it could be manipulated to change the tradeoff,” Schwender said.

Schwender and Hay’s computational model of 572 metabolic reactions turns the problem on its head to narrow the search. Instead of manipulating each pathway one by one to see which might tip the balance from protein toward oil, the model postulates the existence of seeds with different oil and protein content to see which of the many reactions are “responsive” to changes in the oil/protein tradeoff.

“This approach allowed us to narrow down the large list of enzyme reactions to the relatively few ones that might be good candidates to be manipulated in future experimental studies,” Schwender said. “Our major goal is to computationally predict the least possible number of enzymes that have most control over the tradeoff between oil and protein production.”

Of the 572 reactions included in the model, the scientists identified 149 reactions as “protein-responsive” and 116 as “oil-responsive.”

“In addition, the model helps us evaluate how sensitive the reactions are in a quantitative way, so we can see which of these are the ‘most sensitive’ reactions,” Schwender said. “This allows us to identify a relatively few possible targets for future genetic manipulation to tip the balance in favor of greater seed oil production.”

“These simulation tools may therefore point the way to new strategies for re-designing bioenergy crops for improved production,” he concluded.