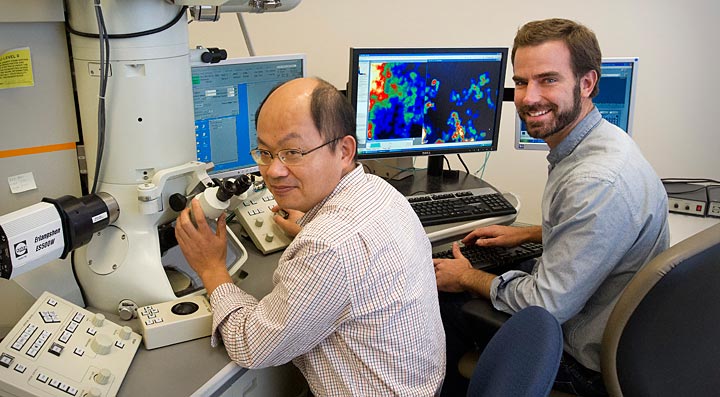 UPTON, NY – The cherished portability of many popular electronics, from smart phones to laptops, mostly comes courtesy of lithium-ion batteries. Unfortunately, these dense and lightweight energy storage devices begin to degrade over time, steadily losing total capacity even when sitting idle on the shelf. Scaling up this promising technology to better power electric vehicles or facilitate grid-scale storage demands battery lifetimes longer than a decade—and fundamental advances in lithium-ion engineering.

Now, researchers at the U.S. Department of Energy’s Brookhaven National Laboratory and collaborating institutions have developed methods of examining lithium-ion reactions in real-time with nanoscale (billionths of a meter) precision, offering unprecedented insights into these crucial materials. The technique uses a novel electrochemical cell and transmission electron microscopy (TEM) to track lithium reactions and precisely expose subtle changes that occur in batteries’ electrodes over time. The results—published this November in Nature Communications—demonstrate the successful technique and reveal a surprisingly fast lithium conversion process that moves layer-by-layer through individual nanoparticles. 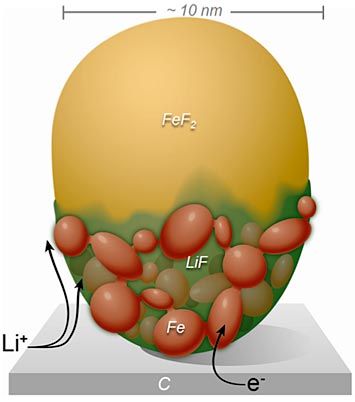 This diagram shows the spread of positively charged lithium ions across the custom-built FeF2 nanoparticle. The conversion reaction sweeps rapidly across the surface before proceeding more slowly in a layer-by-layer fashion through the bulk of the particle.

Lithium ions generate electricity within a battery as they move from a negatively charged electrode to a positive one. A fully charged battery contains all these power-packed ions stored in the first electrode. Once discharged, the process is reversed by applying an external current—often by plugging electronics directly into an outlet—to send those same lithium ions back to that first electrode, recharging the battery. But for all their efficiency, each cycle of discharge/recharge degrades the material’s essential structure and ultimate longevity. Preventing this persistent degradation requires insight into a process that plays out on the elusive scale of billionths of a meter.

Previous real-time analyses, using what scientists call in-situ techniques, are primarily limited to studying bulk materials and lack the spatial resolution to truly explore reactions at the nanoscale. Even other TEM techniques, which build high-resolution images based upon the behavior of electron beams passing through a sample, are rarely used to track lithium transport and related chemical changes in real time during the all-important charge/discharge cycling. The new technique can do both—live imaging with nanoscale precision.

In this study, conducted at Brookhaven Lab’s Center for Functional Nanomaterials, the scientists custom-built an electrochemical cell to operate inside the TEM. The team then observed the lithium reaction process as it unfolded across iron fluoride (FeF2) nanoparticles, chosen because they have significantly higher lithium capacity than conventional electrodes. These real-time experimental observations, supported by advanced computation, revealed that the lithium ions swept rapidly across the surface of the nanoparticles in a matter of seconds. The transformation then moved slowly through the bulk in a layer-by-layer process that split the compounds into distinct regions.

Imagine watching a fire spread across the surface of a log and then steadily eating its way through the layers of wood—only rather than smoke, the lithium ion reaction forms trails of new molecules. Just as burnt wood reveals fundamental characteristics of fire, the changes in morphology and structure in these individual iron nanoparticles provided crucial information about the lithium reaction mechanisms.

“The entire setup for the in-situ TEM measurements was assembled from commercially available parts and was simple to implement, so we expect to see a widespread use of this technique to study a variety of high-energy electrodes in the near future,” Wang said. “We also look forward to adapting this tool to perform more advanced nano-electrochemical measurements with the x-ray nanoprobe at the Lab’s forthcoming National Synchrotron Light Source II.”

This latest research builds upon two other recent studies: The first, published in ACS Nano, detailed the development of electron energy-loss spectroscopy (EELS) techniques to probe the nanoscale spatial distribution and chemical state of lithium in graphite electrodes. The second, published in the Journal of the American Chemical Society, used EELS to reveal that the excellent recharging ability in high-capacity conversion electrodes emerges from electron-transport pathways forming upon reaction with lithium.

“Although many questions remain about the true mechanisms behind this conversion reaction, we now have a much more detailed understanding of electron and lithium transport in lithium-ion batteries,” said Brookhaven physicist and study coauthor Jason Graetz. “Future studies will focus on the charge reaction in an attempt to gain new insights into the degradation over time that plagues most electrodes, allowing for longer lifetimes in the next generation of energy storage devices.”

Additional collaborators on this study included Lijun Wu and Yimei Zhu of Brookhaven Lab, Glenn Amatucci of Rutgers University, and Anton van der Ven and Katsuyo Thornton of the University of Michigan. The research was supported by the Northeastern Center for Chemical Energy Storage, an Energy Frontier Research Center led by Stony Brook University and funded primarily by the DOE’s Office of Science.

This work was supported by the Center for Functional Nanomaterials at Brookhaven. CFN is one of the five DOE Nanoscale Science Research Centers (NSRCs) supported by the DOE Office of Science, premier national user facilities for interdisciplinary research at the nanoscale. Together the NSRCs comprise a suite of complementary facilities that provide researchers with state-of-the-art capabilities to fabricate, process, characterize and model nanoscale materials, and constitute thelargest infrastructure investment of the National Nanotechnology Initiative. The NSRCs are located at DOE's Argonne, Brookhaven, Lawrence Berkeley, Oak Ridge and Sandia and Los Alamos national laboratories. For more information about the DOE NSRCs, please visit http://science.energy.gov/bes/suf/user-facilities/nanoscale-science-research-centers/.