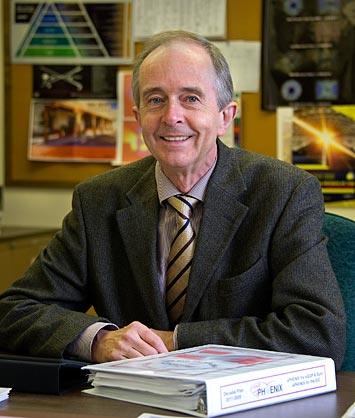 "I am both honored and thrilled by the opportunity to lead Brookhaven Lab's nuclear and particle physics research at a time that is rife with both opportunities and challenges,” Mueller said.

Mueller, an active scientist with more than 300 peer-reviewed publications with 9,000-plus citations, is James B. Duke Professor and Director of the Center for Theoretical and Mathematical Sciences at Duke University. He will continue his work at Duke for the remainder of the current academic year, splitting his time there and at Brookhaven for the next five months. During that time, Brookhaven’s David Lissauer will act as interim ALD to share responsibilities and bring Mueller up to speed on existing operations and new initiatives at the Lab.

“The astounding combination of breadth and excellence enabled by the Lab’s cutting-edge facilities and world-leading expertise in accelerator science and instrumentation offers a singular opportunity to advance the frontiers of nuclear and particle physics research,” Mueller said. “The breakthrough work on the horizon—including RHIC’s unique ability to explore hot, dense nuclear matter and the spin structure of the proton, further studies into the Higgs boson, pinning down neutrino properties, and new initiatives to unravel great unknowns such as dark energy—positions the Lab to remain a global leader in fundamental science over the next decade.”

Mueller has a long collaborative association with Brookhaven Lab, and he recently co-authored a paper for the journal Science reviewing the scientific achievements of RHIC and outlining the complementary physics opportunities for the next decade of the LHC and RHIC experiments. He has also served on many physics review panels for both the U.S. Department of Energy and the National Science Foundation. Mueller currently serves as Chair-Elect of the Division of Nuclear Physics of the American Physical Society, and in this role he collaborated with Steve Vigdor on establishing a white paper writing group for the subfield of hot quantum chromodynamics matter—an area of research central to RHIC.

“We are very pleased to welcome Berndt to Brookhaven as the leader of these exciting and important research programs,” said Doon Gibbs, Brookhaven’s Interim Lab Director. “As a leading member of the nuclear physics community, Berndt will play a crucial role both at the Lab and in the larger nuclear and particle physics community in the coming years.”

Mueller has held several leadership positions at Duke, including Chair of the Department of Physics, Principal Investigator for grants that expanded and supported research at the Duke Free Electron Laser Laboratory, and Divisional Dean of the Natural Sciences. He received his Ph.D. in Theoretical Physics from Goethe University in Frankfurt, Germany, and completed his postdoctoral studies at Yale University and the University of Washington.

“I am looking forward to working with all members of the Laboratory—as well as with the core universities and the science community at large—toward realizing the exciting scientific opportunities within our reach,” Mueller said.