Expert design of precision detectors for research in physics, medicine, and more 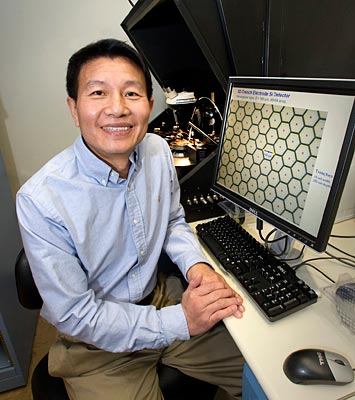 Brookhaven Physicist Zheng Li developed the novel stripixel detector, a single-sided silicon strip detector that increases the accuracy and output of data at the PHENIX experiment at RHIC.

UPTON, NY—Zheng Li, a physicist at the U. S. Department of Energy's Brookhaven National Laboratory, has been named the 2012 recipient of the Institute of Electrical and Electronics Engineers (IEEE) Region 1 Technological Innovation Award. IEEE is the world's largest professional association for the advancement of technology and a leading authority in technical areas ranging from aerospace and biomedical technology to computer engineering.

As a member of the Brookhaven Lab's Instrumentation Division, a team tasked with developing state-of-the-art detectors and other devices required for experimental research, Zheng Li is being recognized by the IEEE for his groundbreaking work in "the development of novel silicon detectors in photon science and particle physics research." Li will be honored at the annual IEEE Awards Banquet at the Fox Hollow Inn on March 21.

Silicon detectors are semiconducting devices in the form of thin wafers with narrow strips or small pixels positioned within larger experiments—for example, the PHENIX experiment at Brookhaven's Relativistic Heavy Ion Collider (RHIC), the only operating "atom smasher" in the U.S. Silicon detectors are used to detect particles traveling at very high speeds as they pass through the detector; scientists can then analyze the "tracks" left behind by these particles to deduce information about the fundamental building blocks of matter and forces of nature.

To increase detection efficiency and lower signal-to-noise ratio, in 2004 Li developed a novel stripixel detector—a single-sided silicon strip detector—that was installed as part of the silicon vertex tracker upgrade at PHENIX in 2010. This innovative stripixel approach significantly increased the accuracy and output of PHENIX data.

More recently, Li developed a "3D-Trench electrode detector," a completely new technology that builds on his stripixel research and has potential applications in high-energy and nuclear physics and in photon sciences.

"I feel greatly honored by this recognition for my efforts in developing novel detectors," Li said. "Working in the Instrumentation Division gives me the opportunity to develop new and novel concepts. I hope these devices will be used at Brookhaven's National Synchrotron Light Source II (NSLS-II) and in future high-luminosity colliders." NSLS-II, like its predecessor, NSLS, will produce x-rays for basic and applied research in many areas of science, but with 10,000 times the brightness of the current light source. In high-performance spectroscopic imaging, such increased resolution requires increased precision in detector technology, making the 3D-Trench electrode detector the ideal device for NSLS-II and other modern synchrotron light sources.

"Right now we have a promising simulation and the first prototype has just been made," said Li, whose collaborating team includes Brookhaven physicists David Lynn, Peter Siddons, Jeff Keister and engineer Wei Chen. "I'm confident we can make it work, and that we could have something unconventional, and maybe revolutionary." Li also acknowledges the superb technical support of Rolf Beuttenmuller and Don Elliott in the detector fabrication group.

"Li is extremely deserving in receiving this award," said Graham Smith, Head of the Instrumentation Division. "These silicon detectors will be invaluable in future programs in photon sciences and at RHIC and the Large Hadron Collider (LHC)," a larger particle accelerator now operating in Europe.

The new detectors have the advantage of being simple to operate, with low capacitance, and with minimal noise—and they require approximately ten times less voltage to operate than traditional 2D models and drift detectors.

"This technology might also be used for medical imaging, for example x-rays, including portable x-ray detectors powered by batteries," Li said. "These could have big commercial applications."

Already, one company based in upstate New York has expressed interest in the technology, according to Kimberley Elcess in Brookhaven's Technology Commercialization and Partnerships office. The 3D-Trench electrode detector has been submitted for U. S. and international patent consideration, and the technology is currently under national-stage review. Li has also been awarded a Brookhaven Seed Grant, with Dmitri Tsybychev and Alyssa Montalbano at Stony Brook University, to develop the 3D-Trench electrode technology.

Li earned a B.S. in physics from Peking University in China in 1981, and a Ph.D. in physics from Pennsylvania State University in 1986. He joined Brookhaven as an Assistant Physicist immediately thereafter, in the fall of 1986, and is now a physicist and group leader in the Instrumentation Division. In 2005 he received the Brookhaven Science and Technology Award, which recognizes distinguished contributions to the Laboratory's science and technology mission over a period of one or more years.

Funding for the award-winning detectors came from the Department of Energy's (DOE) Office of Science.