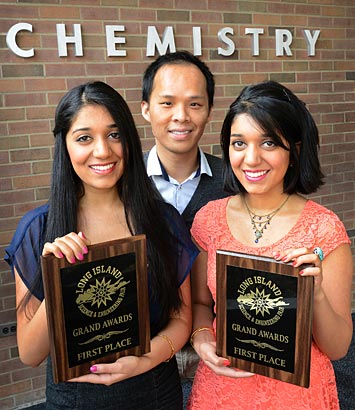 Upton, NY – Twin sisters Shilpa and Shweta Iyer are convinced that producing affordable, abundant clean energy is a vital problem that demands action. Not content to wait for other researchers to find a solution, the sisters—who are in their senior year at Comsewogue High School in Port Jefferson Station—decided to tackle the research themselves: They enrolled in a mentorship program in the Chemistry Department at the U.S. Department of Energy's Brookhaven National Laboratory. The results of this ambitious effort speak for themselves: Last week, Shilpa and Shweta placed first at the Long Island Science and Engineering Fair, beating dozens of other budding scientists and earning a spot in next month's international competition.

While investigating the possibility of distilling pure hydrogen as an alternative fuel source, the young researchers developed a low-cost and portable system that uses an organic biomass-derived catalyst to extract hydrogen atoms from water. Their research, which is conducted under the supervision of Brookhaven chemistry research associate Wei-Fu Chen, progressed rapidly into a project with efficacious results. Their method has the potential to provide cheap and easy access to alternative energy.

Chen is thrilled for the sisters, and unsurprised at the attention their work is getting.

"Shilpa and Shweta showed great scientific talent and creativity in conceiving the idea to use natural materials as a hydrogen catalyst," he said. "We filed a provisional patent application for this technology, which is terrific in such a short time. Their research is at the level of that done by graduate students, not high-school students. They are wonderful to work with."

Hydrogen, which is considered an excellent alternative fuel source because of its abundance and lack of toxic byproducts when converted into energy, can be tricky to isolate in its pure form. Shilpa and Shweta addressed this challenge by using electricity to separate hydrogen and oxygen atoms from water molecules, a process called electrolysis. This technique can be optimized with the addition of a catalyst. An effective catalyst can maximize the ability of an electric current to split water molecules and harvest hydrogen atoms, which can then be used as fuel—but current catalyst models frequently require a precious metal like platinum, which makes hydrogen production prohibitively expensive.

With Chen's guidance, the students searched for an economically viable alternative that is also environmentally friendly. After testing different plants and metals found easily in nature to see which would be most effective, they deduced that a catalyst composed of soybeans (a renewable and abundant biomass) and molybdenum (which is more than 1000 times less expensive than platinum) was an ideal candidate.

"Because soybeans are so high in protein, which improves the durability of the catalyst, we decided they were the most viable option, and started to test it with molybdenum metal," Shilpa said.  "We found that the catalyst worked well for water electrolysis for more than 500 hours."

The conversion of electricity to chemical energy—called electrochemical water splitting—is a multidisciplinary field that introduced the sisters to some of the most advanced technology at the Lab, including a transmission electron microscope in the Condensed Matter Physics and Material Science Department, which can capture images of materials measuring just billionths of a meter. Chen and the students also used X-ray diffraction spectroscopy tools unique to the Center for Functional Nanomaterials (CFN) to get a close look at the structure of molybdenum crystals. With these cutting-edge instruments, the researchers were able to monitor the catalytic activity visually, which helped them refine their experimental model for optimal efficiency.

"We used electron microscopy and X-ray diffraction to see the interaction between soybeans and molybdenum on a molecular level," Shweta said. "These advanced imaging technologies helped us understand why the catalyst is so effective."

Next month Shilpa and Shweta will travel to Phoenix to compete in the prestigious Intel International Science and Engineering Fair, which unites high school students from 70 countries and awards a $75,000 cash prize to the winner. In response to these higher stakes, the sisters are improving the presentation of their research and focusing on how to reach their ultimate goal, which is to effect real change in the availability of alternative fuel sources that are nontoxic and accessible to people all over the world. They've experimented with connecting their hydrogen-producing setup to a solar cell, which can be used anywhere that has access to sunlight, even in hard-to-reach locations such as small villages in countries without an extensive power grid. Shilpa and Shweta are also currently experimenting with other biomasses and different metals, to see if they can improve the durability of their model.

"The hard work pays off a million times over," Shilpa said. "This has been the most rewarding experience, and I hope our technology has an impact on the future of renewable energy. Getting to share this accomplishment with my sister, through all the new ideas and breakthroughs and competitions, makes the experience even more amazing."

This research was funded by Brookhaven's Laboratory Directed Research and Development (LDRD) Program. The tools used at the Condensed Matter Physics and Material Science Department and the Center for Functional Nanomaterials were funded by the DOE Office of Science.