Obama Administration Highlights Importance of Investing in Next Generation of Leaders in Science, Technology, Engineering, and Math Fields 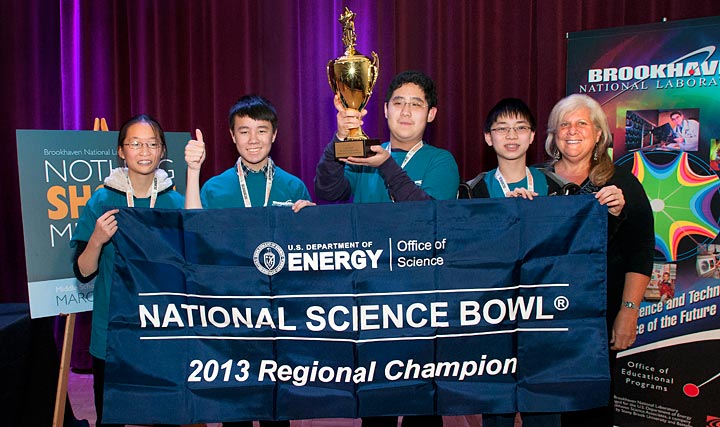 Great Neck South Middle School competed against 20 other teams from across the region in one of the nation's regional competitions of the 23rd Annual U.S. Department of Energy National Science Bowl, and is now eligible to compete in the National Finals in Washington, D.C., at the end of April. The National Science Bowl brings together thousands of middle and high school students from across the country to compete on a range of science disciplines including biology, chemistry, earth science, physics, astronomy, and math.

"Congratulations to the students at Great Neck South Middle School for their achievements in science, technology, engineering and math," said Energy Secretary Chu. "Providing opportunities like the National Science Bowl to challenge today's students is an essential part of keeping America competitive in a rapidly advancing world."

Since January, more than 9,000 high school students and 5,000 middle school students have been competing in what will eventually total 70 high school and 48 middle school regional Science Bowl tournaments.  Students, in teams of four or five, compete in a fast-paced Jeopardy-style format where they solve technical problems and answer questions in all branches of science and math.  Most teams are coached by teachers from the students' schools and spend several months preparing for the regional competitions.  Many states have one regional or statewide Science Bowl competition, while larger states, such as California and Texas, hold several regional
competitions across their states.

Students from Great Neck South Middle School will be awarded an all-expense paid trip to the National Finals in Washington, D.C., which are scheduled for April 25-29, 2013. The regional tournaments, which host 15-50 teams, are sponsored by federal agencies, national laboratories, institutions of education, and non-profit organizations.

DOE's Office of Science manages the competition. More information about these events is available on the National Science Bowl website:  http://www.science.energy.gov/nsb/ .