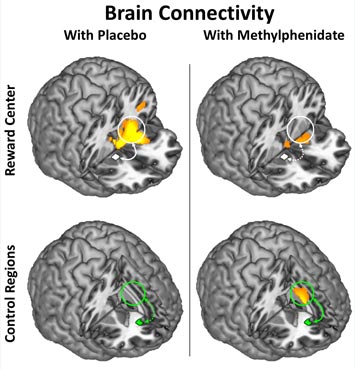 Methylphenidate differentially changes the strength of connectivity, or crosstalk, between brain areas shown to play a role in addiction. Scans collected in cocaine addicted subjects during placebo effects revealed strong connectivity between the brain's reward center and areas involved in forming habits (top row, left) and weak connectivity between higher-order brain areas involved in regulating emotions and self-control (bottom row, left). However, when subjects were given a dose of methylphenidate, a drug that increases dopamine in the brain, the strength of these connections was normalized (right).

UPTON, NY—Several brain-imaging studies have revealed disruptions in communication between brain regions in people addicted to cocaine. A new study conducted at the U.S. Department of Energy's Brookhaven National Laboratory shows that a single oral dose of methylphenidate, a drug commonly used to treat attention deficit hyperactivity disorder (ADHD), modifies connectivity in particular disrupted brain circuits in ways that could potentially help improve self-control and reduce craving among cocaine-addicted individuals. The research is published in JAMA Psychiatry as an Online First Publication, June 26, 2013.

"This study shows promising short-term effects, and suggests the importance of conducting further studies to determine whether methylphenidate could be used as part of a treatment strategy for cocaine addiction," said Anna Konova, a Stony Brook University doctoral student in Brookhaven's Biosciences Department and the study's lead author.

Earlier research* has shown that oral methylphenidate improved brain function in cocaine users performing specific cognitive tasks. It is likely that those effects were related to methylphenidate's blockade of nerve cell proteins that clear dopamine, an important brain-cell communication chemical. By extending dopamine's action, the drug enhances signaling to improve several functions (including attention and processing of salient information) in people with impaired dopamine function, such as chronic drug users or people suffering from ADHD.

The new study was designed to test the effects of methylphenidate (vs. a placebo) on the strength of connectivity, or crosstalk,  between specific brain regions previously shown to play a role in addiction—for example, the reward center and areas involved in forming habits, memories, and exerting self-control.

" This study shows promising short-term effects, and suggests the importance of conducting further studies to determine whether methylphenidate could be used as part of a treatment strategy for cocaine addiction."

The scientists—from Brookhaven, Stony Brook, and the National Institutes of Health—used functional magnetic resonance imaging (fMRI) to measure the strength of connectivity in particular brain circuits before and after subjects were given either a 20-milligram oral dose of methylphenidate or a placebo. They also assessed each subject's severity of addiction to see if this had any bearing on the results.

The scans showed that methylphenidate strengthened connectivity between several brain regions involved in regulating emotions and exerting control over behaviors—connections previously reported to be disrupted in cocaine addiction. Methylphenidate also decreased connectivity between areas of the brain that have been strongly implicated in the formation of habits, including compulsive drug seeking and craving.

Furthermore, comparison of cocaine users to healthy subjects showed that differences in connectivity in some brain regions were related to subjects' severity of addiction before methylphenidate administration. In tests performed after the drug was given, these differences were no longer significant, suggesting that methylphenidate could, at least transiently, change abnormal connectivity between these regions.

"These changes in connectivity strength are consistent with a beneficial response to methylphenidate, extending its previously reported efficacy in normalizing task-related brain function and behavior in people addicted to cocaine," Konova said. "By giving subjects methylphenidate, we are manipulating the level of dopamine, which is improving connectivity among key brain regions relevant to addiction."

Although these results were visible after a single dose, they may be clinically relevant and merit further study, the researchers say, to evaluate the potential use of methylphenidate as part of an addiction-treatment strategy. "For example, these future studies could test if adjunct treatment with methylphenidate can enhance the effectiveness of cognitive-based therapies for cocaine addiction that are targeted toward increasing emotion regulation and self-control and decreasing conditioned associations," Konova said.

This research was supported by grants from the National Institute on Drug Abuse (NIDA, grant 1R01DA023579) and conducted at Brookhaven's Neuropyschoimaging Laboratory, directed by senior author Rita Z. Goldstein, now at the Icahn School of Medicine at Mount Sinai. Further funding came from the Intramural Research Program of the National Institute for Alcohol Abuse and Alcoholism (NIAAA), which supported the contributions of coauthors Dardo Tomasi and Nora D. Volkow. Scott J. Moeller was an additional co-author (recipient of a NIDA training grant, 1F32DA030017-01).