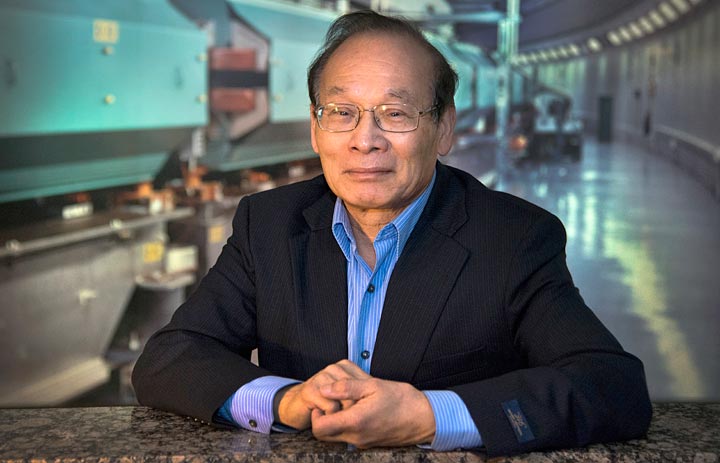 UPTON, NY —Wu-Tsung (Bill) Weng, an accelerator physicist at the U.S. Department of Energy's (DOE) Brookhaven National Laboratory, will be honored as a distinguished Asian American professional at a ceremony to be held on May 24, 2014 at the Sixth Annual Asian Pacific American Heritage Month Celebration at Vajiradhammapadip Buddhist Temple and Thai Cultural Center in Centereach. Weng will accept a proclamation from Suffolk County Executive Steve Bellone at the ceremony, which commences at 4 p.m.

"I am honored and elated to be recognized for my professional contributions in the field of accelerator science," said Weng, who is an international leader in accelerator design. "I also want to thank Brookhaven Lab and DOE for the opportunities and support they have given me throughout my career so that I could conduct research in the exciting and important field of accelerator physics."

In the earlier days of his career Weng was in charge of the multi-million dollar Accumulator-Booster project at Brookhaven from 1987-1991. The Booster is a particle accelerator that injects heavy ions into the Alternating Gradient Synchrotron (AGS), which, in turn, injects them into the Relativistic Heavy Ion Collider (RHIC), where physicists from around the globe are exploring what the universe may have looked like in the first few moments after its creation. Weng's current research focuses on the development of fixed-field accelerator design (FFAG) for eRHIC (the addition of an electron ring to RHIC) and ADS (accelerator driven) reactor systems.

In 2007, Weng was selected to work in the DOE's of High-Energy Physics (in Washington D.C.), as a program manager in the Accelerator Science and Technology Section and was assigned to work on the supervision and evaluation  of accelerator research and development in accelerator physics, superconducting radio frequency, and muon accelerator collaboration conducted in U.S. High-Energy Laboratories.

In 2010, when Weng left DOE to return to Brookhaven he was recognized by then Director of the Office of Science of DOE, William Brinkman, with an Appreciation Award plaque with citation, "Your efforts in the planning, development, and administration of advanced R&D programs have provided a valuable contribution to the High-Energy Physics Program and to the Office of Science. Your experience, wisdom, expertise, and tireless efforts on behalf of the high- energy physics program are very much appreciated and will be greatly missed."

From 1996 to 2002 Weng led Brookhaven's team in the design and construction of the $120 million accumulator ring system for the Spallation Neutron Source (SNS) built at DOE's Oak Ridge National Laboratory. The SNS project was completed in 2005, and reached a beam power of one mega-watt in 2009, the most intense pulsed neutron beam in the world for scientific research and industrial development.

Weng earned a B.S. in electrical engineering from National Taiwan University in 1966, an M.S. in physics from National Tsing-Hua University in Taiwan, in 1968; and a Ph.D. in physics from Stony Brook University in 1974. He took a postdoctoral position in physics at the University of Arizona from 1974 until 1977, when he joined Brookhaven National Laboratory.  In 1980, he became head of the Accelerator Physics Section in the Laboratory's Accelerator Department, and, in 1983 he went on to Stanford Linear Accelerator Center to participate in the construction of the Stanford Linear Collider project. He returned to Brookhaven in 1987. Weng frequently serves as a technical consultant in many DOE reviews of accelerator projects and as an advisory committee member of various accelerator projects in China, Taiwan, Europe, and Japan. He is a Fellow of the American Physical Society, Institute of Electrical and Electronics Engineers, and received the Y.T. Lee Foundation for the Advancement of Outstanding Scholarship Award in 1995, in Taiwan.

In addition to the presentation of awards for distinguished Asian Americans, festivities will include dance and musical performances, photo exhibits, corporate displays, vendors, and more. For additional information on the event go to: http://scaaab.org/2014_asian_american__pacific_islander_heritage_month