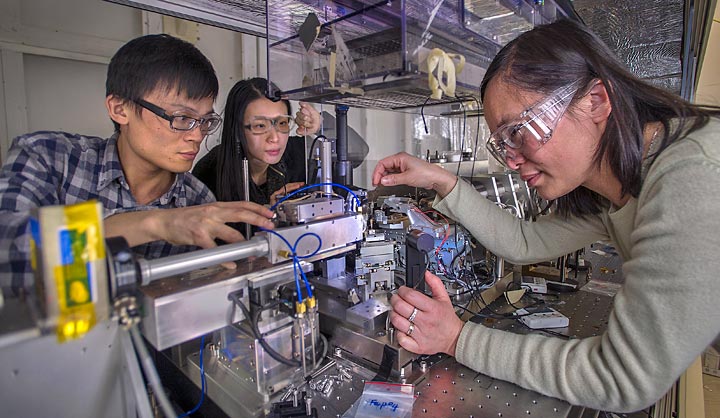 UPTON, NY—Using a new method to track the electrochemical reactions in a common electric vehicle battery material under operating conditions, scientists at the U.S. Department of Energy's Brookhaven National Laboratory have revealed new insight into why fast charging inhibits this material's performance. The study also provides the first direct experimental evidence to support a particular model of the electrochemical reaction. The results, published August 4, 2014, in Nature Communications, could provide guidance to inform battery makers' efforts to optimize materials for faster-charging batteries with higher capacity.

"This is the first time anyone has been able to see that delithiation was happening differently at different spatial locations on an electrode under rapid charging conditions."

"Our work was focused on developing a method to track structural and electrochemical changes at the nanoscale as the battery material was charging," said Brookhaven physicist Jun Wang, who led the research. Her group was particularly interested in chemically mapping what happens in lithium iron phosphate—a material commonly used in the cathode, or positive electrode, of electrical vehicle batteries—as the battery charged. "We wanted to catch and monitor the phase transformation that takes place in the cathode as lithium ions move from the cathode to the anode," she said.

Getting as many lithium ions as possible to move from cathode to anode through this process, known as delithiation, is the key to recharging the battery to its fullest capacity so it will be able to provide power for the longest possible period of time. Understanding the subtle details of why that doesn't always happen could ultimately lead to ways to improve battery performance, enabling electric vehicles to travel farther before needing to be recharged. 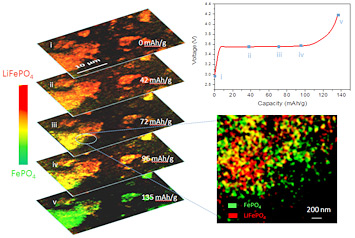 In operando 2D chemical mapping of multi particle lithium iron phosphate cathode during fast charging (top to bottom). The called-out close-up frame shows that as the sample charges, some regions become completely delithiated (green) while others remain completely lithiated (red). This inhomogeneity results in a lower overall battery capacity than can be attained with slower charging, where delithiation occurs more evenly throughout the electrode.

Many previous methods used to analyze such battery materials have produced data that average out effects over the entire electrode. These methods lack the spatial resolution needed for chemical mapping or nanoscale imaging, and are likely to overlook possible small-scale effects and local differences within the sample, Wang explained.

To improve upon those methods, the Brookhaven team used a combination of full- field, nanoscale-resolution transmission x-ray microscopy (TXM) and x-ray absorption near-edge spectroscopy (XANES) at the National Synchrotron Light Source (NSLS), a DOE Office of Science User Facility that provides beams of high-intensity x-rays for studies in many areas of science. These x-rays can penetrate the material to produce both high-resolution images and spectroscopic data—a sort of electrochemical "fingerprint" that reveals, pixel by pixel, where lithium ions remain in the material, where they've been removed leaving only iron phosphate, and other potentially interesting electrochemical details.

The scientists used these methods to analyze samples made up of multiple nanoscale particles in a real battery electrode under operating conditions (in operando). But because there can be a lot of overlap of particles in these samples, they also conducted the same in operando study using smaller amounts of electrode material than would be found in a typical battery. This allowed them to gain further insight into how the delithiation reaction proceeds within individual particles without overlap. They studied each system (multi-particle and individual particles) under two different charging scenarios—rapid (like you'd get at an electric vehicle recharging station), and slow (used when plugging in your vehicle at home overnight).

Insight into why charging rate matters

These animated images of individual particles, taken while the electrode is charging, show that lithiated (red) and delithiated (green) iron phosphate phases co-exist within individual particles. This finding directly supports a model in which the phase transformation proceeds from one phase to the other without the existence of an intermediate phase.

The detailed images and spectroscopic information reveal unprecedented insight into why fast charging reduces battery capacity. At the fast charging rate, the pixel-by-pixel images show that the transformation from lithiated to delithiated iron phosphate proceeds inhomogeneously. That is, in some regions of the electrode, all the lithium ions are removed leaving only iron phosphate behind, while particles in other areas show no change at all, retaining their lithium ions. Even in the "fully charged" state, some particles retain lithium and the electrode's capacity is well below the maximum level.

"This is the first time anyone has been able to see that delithiation was happening differently at different spatial locations on an electrode under rapid charging conditions," Jun Wang said.

Scientists have known for a while that slow charging is better for this material, "but people don't want to charge slowly," said Jiajun Wang, the lead author of the paper. "Instead, we want to know why fast charging gives lower capacity. Our results offer clues to explain why, and could give industry guidance to help them develop a future fast-charge/high-capacity battery," he said.

For example, the phase transformation may happen more efficiently in some parts of the electrode than others due to inconsistencies in the physical structure or composition of the electrode—for example, its thickness or how porous it is. "So rather than focusing only on the battery materials' individual features, manufacturers might want to look at ways to prepare the electrode so that all parts of it are the same, so all particles can be involved in the reaction instead of just some," he said.

The individual-particle study also detected, for the first time, the coexistence of two distinct phases—lithiated iron phosphate and delithiated, or pure, iron phosphate—within single particles. This finding confirms one model of the delithiation phase transformation—namely that it proceeds from one phase to the other without the existence of an intermediate phase.

"These discoveries provide the fundamental basis for the development of improved battery materials," said Jun Wang. "In addition, this work demonstrates the unique capability of applying nanoscale imaging and spectroscopic techniques in understanding battery materials with a complex mechanism in real battery operational conditions."

The paper notes that this in operando approach could be applied in other fields, such as studies of fuel cells and catalysts, and in environmental and biological sciences.

Future studies using these techniques at NSLS-II—which will produce x-rays 10,000 times brighter than those at NSLS—will have even greater resolution and provide deeper insight into the physical and electrochemical characteristics of these materials, thus making it possible for scientists to further elucidate how those properties affect performance.

Yu-chen Karen Chen-Wiegart also contributed to this research. This work was supported by a Laboratory Directed Research and Development (LDRD) project at Brookhaven National Laboratory. The use of the NSLS was supported by the U.S. Department of Energy's Office of Science.