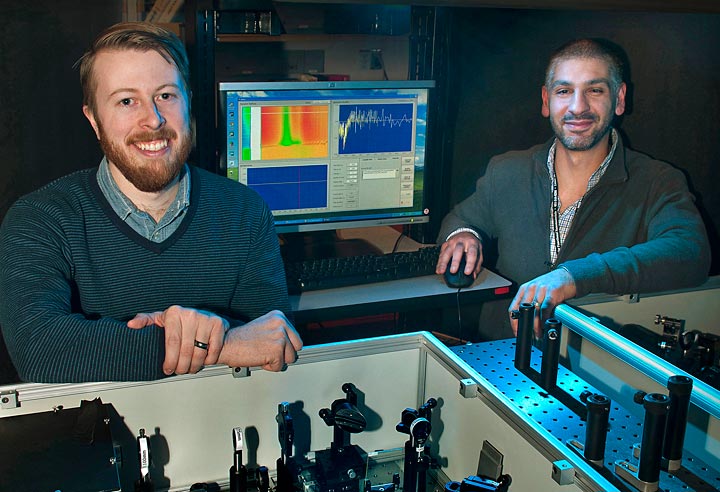 UPTON, NY — One challenge in improving the efficiency of solar cells is that some of the absorbed light energy is lost as heat. So scientists have been looking to design materials that can convert more of that energy into useful electricity. Now a team from the U.S. Department of Energy's Brookhaven National Laboratory and Columbia University has paired up polymers that recover some of that lost energy by producing two electrical charge carriers per unit of light instead of the usual one.

"Critically, we show how this multiplication process can be made efficient on a single molecular polymer chain," said physicist Matthew Sfeir, who led the research at Brookhaven Lab's Center for Functional Nanomaterials (CFN), a DOE Office of Science User Facility. Having the two charges on the same molecule means the light-absorbing, energy-producing materials don't have to be arrayed as perfect crystals to produce extra electrical charges. Instead, the self-contained materials work efficiently when dissolved in liquids, which opens the way for a wide range of industrial scale manufacturing processes, including "printing" solar-energy-producing material like ink.

The research is published as an Advance Online Publication in Nature Materials, January 12, 2015.

Having the two charges on the same molecule means the light-absorbing, energy-producing materials … work efficiently when dissolved in liquids, which opens the way for a wide range of industrial scale manufacturing processes.

The concept of producing two charges from one unit of light is called "singlet fission." (Think of the fission that splits a single biological cell into two when cells multiply.) Devices based on this multiplication concept have the potential to break through the upper limit on the efficiency of so-called single junction solar cells, which is currently around 34 percent. The challenges go beyond doubling the electrical output of the solar cell materials, because these materials must be incorporated into actual current-producing devices. But the hope is that the more-efficient current-generating materials could be added on to existing solar cell materials and device structures, or spark new types of solar cell designs.

Most singlet fission materials explored so far result in twin charge carriers being produced on separate molecules. These only work well when the material is in a crystalline film with long-range order, where strong coupling results in an additional charge being produced on a neighboring molecule. Producing such high quality crystalline films and integrating them with solar cell manufacturing complicates the process.

Producing the twin charges on a single polymer molecule, in contrast, results in a material that's compatible with a much wider variety of industrial processes.

The materials were designed and synthesized by a Columbia University team led by Professor Luis Campos, and analyzed at Brookhaven using specialized tools at the CFN and in the Chemistry Department. For Sfeir and Campos, the most fascinating part of the interdisciplinary project was exploring the electronic and chemical requirements that enable this multiplication process to occur efficiently.

"We expect a significant leap in the development of third-generation, hot-carrier solar cells," said Campos. "This approach is especially promising because the materials' design is modular and amenable to current synthetic strategies that are being explored in second-generation organic solar cells."

Details of the materials' analysis

At the CFN, Sfeir and Erik Busby (a postdoctoral fellow) used time-resolved optical spectroscopy to induce and quantify singlet fission in the various polymer compositions using a single laser photon. Xiaoyang Zhu of Columbia helped to understand the data and interpret results.

"We put light energy into a material with a laser pulse and watch what happens to that energy using a series of weaker light pulses — somewhat analogous to taking snapshots using a camera with a very fast shutter," Sfeir said.

"The differences observed between these two experiments allowed us to unambiguously identify singlet fission as the primary process responsible for the production of these twin charges," Sfeir said.

With Qin Wu, the team also used a powerful computer cluster at the CFN to model these materials and understand the design requirements that were necessary for singlet fission to take place.

"The ideas for this project and supervision of the work were really shared between Brookhaven and Columbia," Sfeir said. "It's a great example of the kind of collaborative work that takes place at DOE user facilities like the CFN."

The next steps for the CFN-Columbia team will be to test a large class of materials using the design framework they've identified, and then integrate some of these carbon-based polymer materials into functioning solar cells.

"Even though we have demonstrated the concept of multiplication in single molecules," Sfeir said, "the next challenge is to show we can harness the extra excitations in an operating device. This may be in conventional bulk type solar cells, or in third-generation concepts based on other inorganic (non-carbon) nanomaterials. The dream is to build hot-carrier solar cells that could be fully assembled using solution processing of our organic singlet fission materials."

This project was funded through the Center for Re-Defining Photovoltaic Efficiency Through Molecular-Scale Control, an Energy Frontier Research Center at Columbia University funded by the DOE Office of Science. The CFN and LEAF at Brookhaven Lab are also supported by the DOE Office of Science. Additional funding for the researchers at Columbia was provided by a 3M Non-Tenured Faculty Award and the National Science Foundation (DMR-1351293, DMR-1321405).