Smashing Polarized Protons to Uncover Spin and Other Secrets 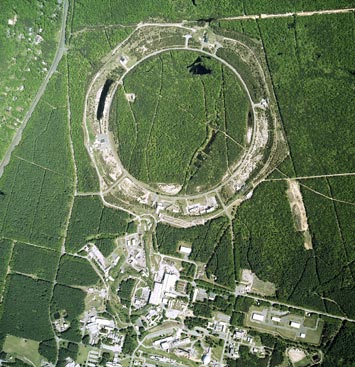 The Relativistic Heavy Ion Collider at Brookhaven National Laboratory is the only facility in the world capable of colliding beams of spin-polarized protons—either with one another or with a range of heavier ions.

UPTON, NY — If you want to unravel the secrets of proton spin, put a "twist" in your colliding proton beams. This technique, tried and perfected at the Relativistic Heavy Ion Collider (RHIC)—a particle collider and U.S. Department of Energy Office of Science User Facility at Brookhaven National Laboratory—orients the colliding protons' spins in a particular direction, somewhat like tiny bar magnets with their North poles all pointing up.

Changing that direction and colliding different combinations of these spin-polarized proton beams gives scientists a way to decipher how the protons' internal building blocks—quarks and gluons—contribute to their overall spin. RHIC is the only facility in the world with the ability to collide such polarized protons. The latest round of these collisions has just begun and will continue for approximately the next nine weeks.

Run 15 will produce higher collision rates than in previous years, thanks to a number of machine upgrades at RHIC.

"When protons pass by each other, their positive charges make the protons in one beam repel those in the other," explained Wolfram Fischer Accelerator Division Head for Brookhaven's Collider-Accelerator Department. "Electron lenses use the attractive force of negatively charged electrons to compensate for this repulsive tendency and thereby allow more protons to be packed into the beams." 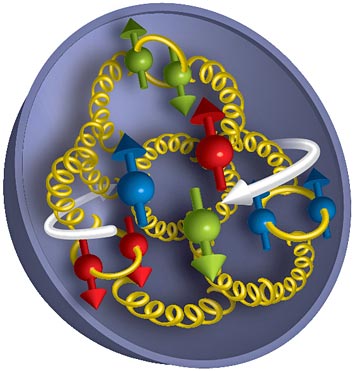 RHIC's polarized proton collisions are offering insight into how the spins of the internal building blocks of a proton — the quarks and antiquarks (balls with arrows) and gluons (yellow "springs") — contribute to the overall proton spin, as well as whether and how much the orbital and transverse "bouncing" motions of these individual particles also contribute to spin.

The mystery of the source of proton spin  has puzzled nuclear physicists ever since experiments in the 1980s showed that the spins of quarks and antiquarks could account for, at most, a third of the proton's total spin. "One main goal of RHIC's energetic polarized-proton collisions is to increase the precision of our measurements so we can better tease out the contribution from the gluons' spin," said Jamie Dunlop, Associate Chair for Nuclear Physics in Brookhaven's Physics Department.

By sending the protons through spiral-cut magnets called Siberian snakes —which regularly flip the protons' spin direction from up to down and vice versa to correct for depolarizing effects—and spin rotator magnets located on either side of RHIC's two particle detectors, the scientists can twist and turn the beam to orient the proton's spins pretty much any way they like. So far, these experiments at RHIC have revealed that gluon spins play a crucial role in proton spin, nearly equal to that of the quark and anti-quark spins. The new precision measurements will help clarify just how big that contribution is. 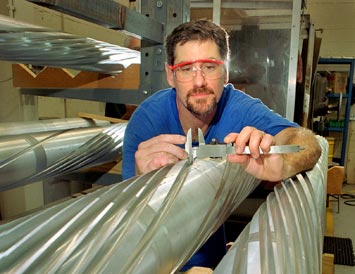 Spiraling magnets called Siberian snakes, placed at strategic locations along the chain of magnets that make up the RHIC accelerator, regularly flip the protons' spin direction from up to down and vice versa to correct for depolarizing effects.

Another key goal is to define and determine why, in transversely polarized proton-proton collisions, there is an imbalance in the way certain particles are deflected in one direction rather than another.

"When you collide an unpolarized proton beam (where the proton spins can be pointing in any direction) with a proton polarized transverse to its direction of travel (say, with its polarization axis facing up), there is a net deflection—an imbalance in the probability for a particle to go to the left versus to go to the right —just like when a ball hits a spinning fan," said Dunlop. "The effect at RHIC is huge," he said, with up to twice as many particles going to one side as opposed to the other.

The source of this phenomenon is still unclear, despite its strength and despite more than a decade of measurements.

At RHIC, collisions of protons polarized transverse to their direction of travel (say, with the polarization axis facing up) with an unpolarized proton beam (where the proton spins can be pointing in any direction) result in an imbalance in the probability for a particle created in the collision to go to the left versus to the right. Run 15 will help physicists explore the source of this phenomenon, which could be connected to the transverse momentum of the quarks and gluons inside the proton.

"Some scientists think it could be connected to the transverse momentum of the quarks and gluons inside the proton—a bouncing kind of motion of these subcomponents that is perpendicular to the protons' direction of travel," said Brookhaven physicist Elke Aschenauer, a leader in the spin program at RHIC. "The polarization of RHIC's beams makes it possible to visualize this motion by measuring the tendency of particles to come out to the left versus right."

After the initial nine-week part of the run, RHIC physicists will begin a series of experiments they've never done before—collisions of polarized protons in one beam with a beam of heavier ions  (first gold, for about five weeks, then a shorter two-week run with aluminum). These collisions will help the scientists search for indications of gluon saturation—dense gluon fields predicted by theorists to exist in the nuclei and hinted at in results from early deuteron-gold collisions at RHIC and, more recently, proton-lead collisions at the Large Hadron Collider (LHC). 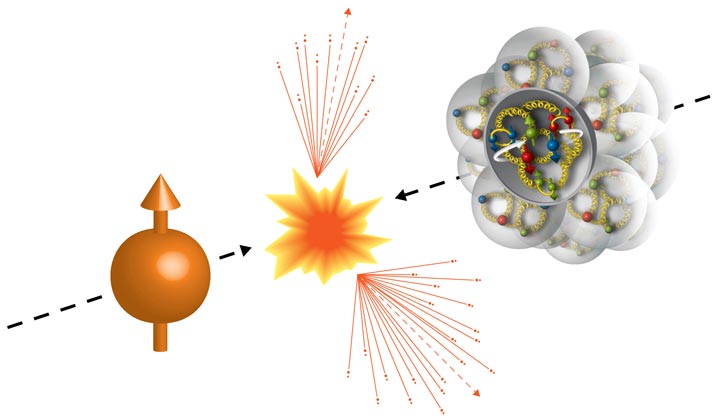 Colliding polarized protons with heavier nuclei will offer insight into gluon walls postulated to exist within the nuclei. Analysis of jets of particles streaming out of these collisions with a preference for one direction over another will help scientists tease out how the gluons' density is distributed inside the nucleus.

These gluon fields could play an important role in proton spin and also in the formation of quark-gluon plasma—where the protons and neutrons in two colliding ion beams melt to form a seething soup of quark and gluon building blocks no longer confined within individual nuclei. Recent data at RHIC and the LHC have given hints that tiny droplets of quark-gluon plasma may even be formed in collisions of protons (or deuterons) with larger nuclei.

"A crucial test to see whether this is the case would be to engineer the formation of one, two, or three droplets via collisions of protons, deuterons, or helium-3 projectiles with larger nuclei," said University of Colorado physicist Jamie Nagle, a co-spokesperson for the PHENIX collaboration at RHIC. "With deuteron and helium results already in hand, data from proton-heavy ion collisions in Run 15 will complete the set of these initial tests."

In addition, said Aschenauer, "RHIC's unique ability to collide polarized protons with heavy nuclei provides the only opportunity in the world to get a first look at the orbital momentum of gluons inside the proton." Orbital momentum describes how the gluons move around within the proton—a separate characteristic from their spin, which is more analogous to rotation around an internal axis. These collisions therefore provide a window through which physicists can view another possible contribution to the proton spin puzzle.

"We do this," she explained, "by looking at the production of rare J/psi particles, which are produced when two gluons merge. If these particles emerge with a preference for the left or right direction with respect to the polarization direction of the proton beam, it tells something about how the gluons were moving around inside the proton."

RHIC scientists will also make improved measurements of "direct photons," particles of light that emerge directly from the collisions without any interactions with the rest of the particles created in the particle smashups. These particles give the most direct insight into the conditions created within the collision zone, including the orbital motion of quarks (in proton-proton collisions) and the role of gluon fields (in collisions of protons with larger nuclei).

Many of these measurements will be made possible by upgrades designed specifically for this purpose at RHIC's two sophisticated particle detectors, PHENIX and STAR.

For example, STAR and PHENIX have both installed novel detector technologies to help analyze particles that emerge from RHIC collisions in the forward direction—close to and along the direction of the beamline.

"PHENIX has pushed the boundaries of photon detection with a compact tungsten-silicon hybrid detector called the MPC-EX," said PHENIX Deputy Spokesperson John Lajoie, a professor at Iowa State University. "This detector combines the high density of tungsten with the fine spatial resolution of silicon to separate very closely spaced particles. With this novel new detector, PHENIX will be able to separate direct photons from sources of background that would otherwise overwhelm the signal."

STAR has a preshower detector installed in front of the forward meson spectrometer. "This is the first large-scale implementation at RHIC using next-generation silicon photomultipliers for the detection of scintillator light emitted by plastic scintillators, which create light when charged particles pass through them," Dunlop said. "It replaces a technology much like vacuum tubes that has been used for decades to precisely detect small amounts of light. Only recently has solid-state technology gotten to this point," he said. The silicon photomultiplier technology may also be incorporated into a future upgrade to PHENIX, which will further expand RHIC's capabilities.

"All of these advances to the collider and its detectors showcase the value of RHIC as a testing ground for new technologies that may prove to be useful for other colliders and future research projects at and beyond Brookhaven Lab," Dunlop said.