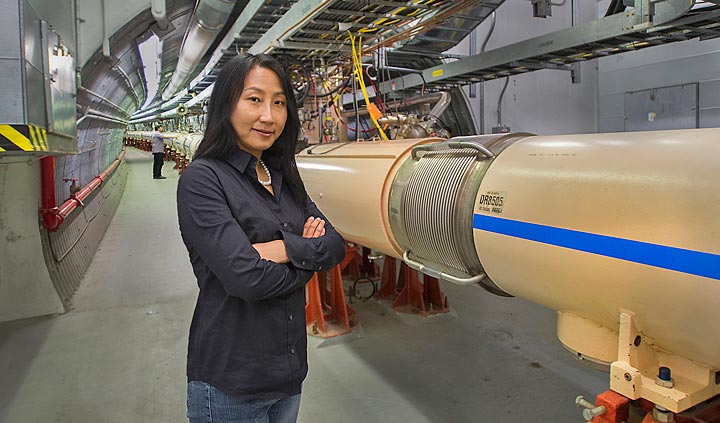 UPTON, NY — On May 21, 2015, U.S. Energy Secretary Ernest Moniz announced nine exceptional U.S. scientists and engineers as recipients of the Ernest Orlando Lawrence Award for their contributions in research and development that supports the Energy Department's science, energy and national security missions. Among the nine recipients is physicist Mei Bai, who conducted research at Brookhaven National Laboratory's Relativistic Heavy Ion Collider (RHIC).  Bai is being honored for her outstanding contributions advancing understanding of the dynamics of spin-polarized beams and for the acceleration of polarized protons at RHIC, making it the world's first and only high energy polarized proton collider.

"These mid-career researchers have made significant advances in fundamental science and technology innovation," Secretary Moniz said. "They will help sustain America's research and development leadership. I congratulate the winners for their outstanding achievements, thank them for their work on behalf of the Department and the Nation, and look forward to their continued accomplishments."

Bai's work contributed to the successful acceleration of polarized proton beams up to 255 giga (billion) electron volts (GeV), and the collision of polarized protons up to a center-of-mass energy of 510 GeV in RHIC, which has impacted fundamental nuclear physics, allowing for the first direct measurement of the gluon and sea quark contribution to the spin of the proton.

"I am honored to be recognized for my work and contributions at RHIC," said Bai. "The science at RHIC is a team effort. I feel so privileged to have been part of the Brookhaven team and a member of the collaboration of scientists from around the world who come together in pursuit of the discoveries and knowledge that lead us to a better understanding of our universe."

In the 1990s, Bai and collaborators devised a way to keep protons in an accelerating beam "polarized," or all spinning with their axes in the same direction. The technique was successfully demonstrated at Brookhaven's Alternating Gradient Synchrotron, an accelerator that is a key part of the RHIC complex. Physicists from around the world study polarized protons at RHIC to determine the answer to a fundamental question – how protons get their spin, an intrinsic property of the particle that is not completely understood.

Bai and collaborators also determined that adding a radio-frequency (RF) dipole magnet to an accelerator could counteract the effect of focusing magnets that interfere with the polarized protons' alignment. Like a child pushed on a swing, the protons are pushed, or "kicked," as they speed through the accelerator at nearly the speed of light. This kick destroys their natural alignment, but the kick from the RF dipole produces a frequency that keeps the protons' spin aligned, both horizontally and vertically, which is necessary for experiments.

In 2004, 2005, and 2009, Bai was the RHIC polarized proton run coordinator, ensuring that all systems were working at optimum level in the accelerator and troubleshooting when problems developed.

Mei Bai earned a bachelor's degree in engineering from the University of Electronic Science and Technology of China, Chengdu, China, in 1989; a master's degree in physics from the University of Science and Technology, Hefei, China, in 1992; and a Ph.D. in physics from Indiana University in 1999. She joined Brookhaven Lab in 1999 as a research associate in the RHIC Accelerator Physics Group, was promoted to associate scientist in 2001, and to scientist in 2004. In 2010, the Asian Committee for Future Accelerators and the organizing committee of the 2010 First International Particle Accelerator Conference (IPAC'10) awarded Bai a prize for her significant and original contributions to the field of accelerator research. She was also the 2000 recipient of the American Physical Society's Outstanding Doctoral Thesis Research in Beam Physics Award.  Bai recently joined the Nuclear Physics Institute (IKP) located in Germany, which conducts experimental and theoretical basic research in the areas of nuclear, hadron and particle physics. IKP operates the COSY cooler synchrotron, an accelerator and storage ring that provides unpolarized and polarized proton and deuteron beams, where Bai does her research.

The Lawrence Award was established to honor the memory of Ernest Orlando Lawrence, who invented the cyclotron - an accelerator of subatomic particles - and was named the 1939 Nobel Laureate in physics for that achievement. Lawrence later played a leading role in establishing the U.S. system of national laboratories, and today, the Energy Department's national laboratories in Berkeley and Livermore, California bear his name. Each of the nine Lawrence Award recipients announced today will receive a medal and a $20,000 honorarium at a ceremony in Washington, D.C. later this year.

For more information about the Ernest Orlando Lawrence Award and the contributions each award recipient has made to U.S. leadership in energy, science and security, please visit http://science.energy.gov/lawrence/