From creating the tiniest drops of primordial particle soup to devising new ways to improve batteries, catalysts, superconductors, and more, scientists at the U.S. Department of Energy's Brookhaven National Laboratory pushed the boundaries of discovery in 2015. Here, in no particular order, are our picks for the top 10 advances of the year. 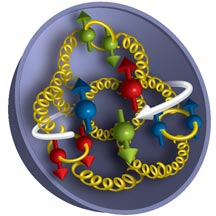 In 2015, the Relativistic Heavy Ion Collider (RHIC), Brookhaven's flagship particle accelerator for nuclear physics research, shattered its own record for producing polarized proton collisions at 200-giga-electron-volt (GeV) collision energy. Thanks to the installation of "electron lenses" and other accelerator improvements, RHIC physicists routinely delivered 1200 billion polarized proton smashups per week—more than double the number routinely achieved in 2012 at the same collision energy. More collisions produce more data for scientists to analyze, increasing the precision of measurements and the potential for new discoveries about the protons' internal structure. 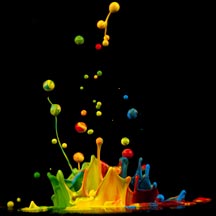 Also at RHIC, in collisions of small particles such as protons, deuterons, and helium nuclei with much larger nuclei of gold atoms, scientists discovered the same kind of particle flow they've observed in their gold-on-gold smashups. These findings reveal that the small particles can create tiny droplets of quark-gluon plasma (QGP)—a liquid-like soup of matter's most fundamental building blocks like the larger samples of QGP created in the gold-on-gold collisions. These experiments are revealing the key elements required for creating the QGP and could also offer insight into the initial state characteristics of the colliding particles.

Scientists at Brookhaven's Center for Functional Nanomaterials (CFN) have developed novel ways to structure materials at the nanometer scale, with the goal of improving their performance. In one study, they created highly antireflective surface textures on silicon—a property that could greatly enhance solar cells' conversion of sunlight to electricity. In another project, they developed a new technique to rapidly create multilayered, self-assembled grids with fully customizable shapes and compositions. CFN scientists also demonstrated several new ways of using synthetic strands of DNA—the twisted ladder molecule with highly specific binding—as a scaffold and programmable "glue" for linking up nanoparticles. This work has resulted in a variety of nanoparticle assemblies, including 3D superlattices and composite structures with switchable phases whose optical, magnetic, or other properties might be put to use in dynamic energy-harvesting or responsive optical materials. 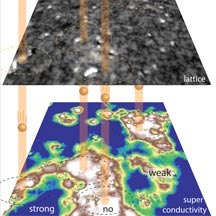 Two studies at Brookhaven uncovered new details about iron-based superconductors, materials that carry electrical current with no resistance that could find application in zero-energy-loss power lines or energy-generating turbines if scientists can figure out how to optimize this effect. One described an iron-telluride material that displays a liquid-like magnetic state consisting of two coexisting and competing disordered magnetic phases that appears to precede—and may be linked to—its superconducting behavior. The other showed how high-energy heavy-ion bombardment boosts superconductivity in certain iron-based materials by pinning potentially disruptive magnetic vortices in place. These details point to new strategies to explore for enhancing iron-based superconductors for real-world applications. 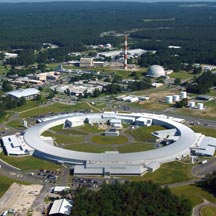 In February, U.S. Energy Secretary Ernest Moniz dedicated the National Synchrotron Light Source II (NSLS-II), declaring Brookhaven's newest research facility open for business. Results from some experiments performed while fine-tuning the facility's intensely bright x-ray beams and other equipment have already been published. The very first data collected at NSLS-II revealed information about the relationship between the atomic structure of a material and its ability to convert heat into electricity. Such thermoelectric materials hold promise for converting waste heat to electricity, as well as for solid-state refrigerators. Another early publication used NSLS-II x-ray scattering data to produce high-quality information on the atomic structure of nanocrystalline thin films, materials that play a vital role in a large number of technologies, including computer chips and solar cells. 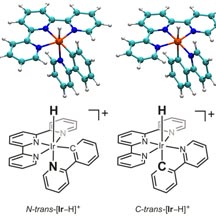 Brookhaven Lab chemists and their collaborators revealed how a simple rearrangement of molecular attachments on an iridium hydride catalyst can greatly improve the catalyst's ability to coax notoriously stable CO2 molecules to react. The research offers clues that could help scientists design more effective catalysts for transforming carbon dioxide (CO2) to useful products such as methanol or other hydrocarbons. Theoretical calculations offered insight into why the positioning of a key carbon atom is so essential to the reactivity—and may suggest strategies for new catalyst designs.

The ability to study materials as they operate will revolutionize research on catalysts, batteries, fuel cells, and other major energy technologies. Brookhaven researchers and the Center for Functional Nanomaterials (CFN) are at the forefront of developing these operando techniques. In one example, scientists used x-rays from Brookhaven's NSLS (now replaced by NSLS-II) to map the changing atomic architecture of a promising lithium battery cathode as the battery discharged. The study revealed how a slow discharge rate early in the battery's life creates a uniform and expansive network of nanoscale silver "bridges" that enhances conductivity. In a major advance, scientists combined electron microscopy and synchrotron x-rays to track the dynamic transformations of a working catalyst, including views of single atoms and larger structures, which would have been impossible without combining the two complementary operando techniques.

8. Best Precision Yet for Neutrino Measurements at Daya Bay 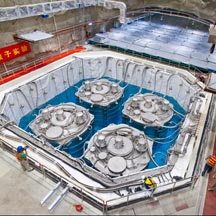 In September, the international Daya Bay Collaboration announced new findings on measurements that track the way neutrinos change types or flavors as they move, a characteristic called neutrino oscillation. The measurements were the most precise to date and could hold the key to understanding the asymmetry between matter and antimatter in the universe. Brookhaven Lab researchers play multiple roles in this international project, ranging from project management to detector engineering and data analysis, and were among those recognized with a Breakthrough Prize for neutrino research last year. 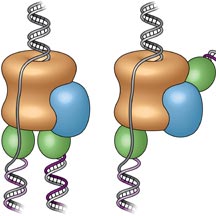 Scientists at Brookhaven and Stony Brook and Rockefeller universities produced the first-ever images of the complete protein complex that unwinds, splits, and copies double-stranded DNA. The electron microscope images revealed something rather different from the standard textbook view, and offer new insight into how this molecular machinery functions— including new possibilities about its role in DNA "quality control" and cell differentiation. Studying this molecular machinery, known collectively as a "replisome," and the details of its DNA-copying process can help scientists understand what happens when DNA is miscopied—a major source of mutation that can lead to cancer—and learn more about how a single cell can eventually develop into the many cell types that make up a multicellular organism.

10. Supercomputing the Strange Difference Between Matter and Antimatter 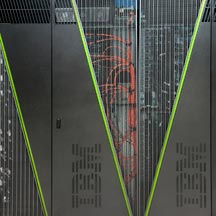 An international team of physicists including theorists from Brookhaven Lab published the first calculation of direct "CP" symmetry violation—how the behavior of subatomic particles (in this case, the decay of kaons) differs when matter is swapped out for antimatter. Comparing the prediction represented by this calculation with experimental results gives scientists a way to look for evidence of new, unknown phenomena that lie outside of the Standard Model—physicists' present understanding of the fundamental particles and the forces between them. The calculation required more than 200 million core processing hours on supercomputers and would have required two thousand years using a laptop. The result does not yet indicate a difference between experiment and theory, but scientists expect the precision of the calculation to improve dramatically now that they've proven they can tackle the task. That precision may yet reveal new physics.

The bulk of the research conducted at Brookhaven National Laboratory is funded by the DOE Office of Science. Full funding information for the individual projects listed above can be found in the linked stories and scientific publications. RHIC, NSLS/NSLS-II, and CFN are DOE Office of Science User Facilities.