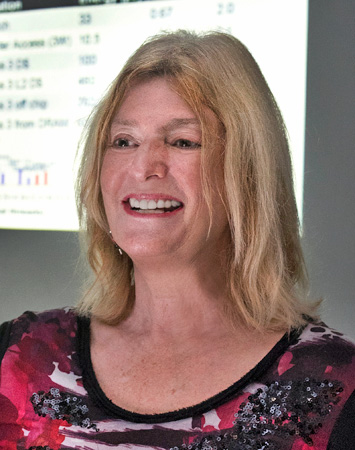 UPTON, NY–Barbara Chapman, a leading researcher in programming languages, programming models, and compilers, has been named head of the Computer Science and Mathematics Group (CSM) under the new Computational Science Initiative at the U.S. Department of Energy's Brookhaven National Laboratory. Chapman is also a professor of Applied Mathematics & Statistics and Computer Science at Stony Brook University, where she serves as a joint appointee affiliated with the university's Institute for Advanced Computational Science (IACS).

As a core part of CSI, CSM will focus on fundamental research into novel methods and algorithms in support of hypothesis-driven streaming data analysis in high-data-volume and high-data-velocity experimental and computing environments. Further efforts will research new solutions for multi-source streaming data analysis and interpretation, as well as long-term data curation and active reuse.

"I am pleased to join Brookhaven Lab's Computational Sciences Initiative and to lead the Computer Science and Mathematics Group," said Chapman. "Reliability, high performance, and energy efficiency are key drivers for CSI's user communities, so the CSM team's research will address all relevant aspects of streaming data processing from hardware architectures to the application layers."

Much of Chapman's current research is focused on OpenMP, an industry standard for shared memory parallel programming that has been broadly accepted by the computing community.

"Barbara is an inspirational leader in the field of computer science, and we are very excited to have her on the team. Her world-renown expertise in programming models and compilers provides a crucial building block in our data-centric computing agenda," said Kerstin Kleese Van Dam, CSI Director.

Chapman is the founder and CEO of cOMPunity, Inc., an organization of researchers who are committed to furthering the work of the OpenMP Architecture Review Board, the organization that maintains and develops this application programming interface.

Before coming to Brookhaven Lab and Stony Brook University, Chapman was director of the Center for Advanced Computing and Data Systems at the University of Houston.

Chapman completed her Ph.D. in Computer Science at Queen's University of Belfast, Northern Ireland, U.K. She is a member of editorial boards for Concurrency Practice and Experience (Wiley) and the International Journal of Computational Science and Engineering (InderScience), and is also a member of the Global Arrays Steering Committee, the International Exascale Project, the Open64 Steering Group and the Executive Council of the Educational Alliance for a Parallel Future.